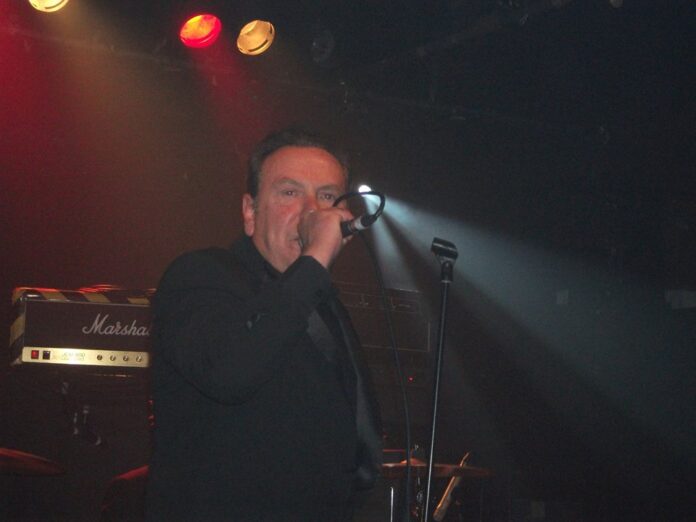 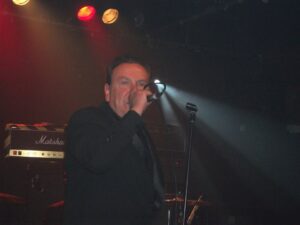 ‘Night of Treason’ guitarist Bill is not normally a blagger, but seeing The Godfathers’ singer Peter Coyne outside the venue with its ‘sold out’ sign was a godsend.

“Any chance of getting on the guest list?”  he ventured.

“Put Gloria on the list” said Peter dryly to the doorperson as he stubbed out his fag and walked in.

Now that is the exactly the sort of cool you expect from the The Godfathers. The Coynes always maintained their East End gangster type image and why they didn’t try for parts as henchmen in Brit gangster movies like Snatch and Gangster Number 1 I’ll never know. I guess they wanted to concentrate on the music instead of learning lines like “Feed ‘im to the pigs ‘Arold”.

The Godfathers were contenders. It’s a travesty that they didn’t become stars (when bands like The Cult and Wonderstuff did). They remained perennial outsiders but are treasured by their fans as one of The Last Great British Rock’n’Roll Bands. 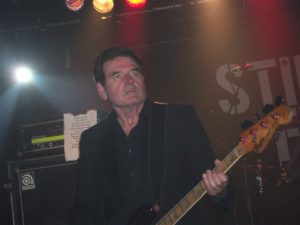 The Godfathers in 2014 are older, none-the-wiser, a few pounds heavier but can still rock like the hard bastards they are.  This was a 40 minute greatest hit-by-hit set covering the whole of their repoitoire from the Sid Presley Experience days; Hup, 2,3,4 to Primitive Man from last year’s Jukebox Fury album.  They made every song count and despite assurances that they were here to “warm us up for Stiff Little Fingers” you can’t help feel that there’s a bit of bitterness about how Lady Luck and the Music Business have conspired against the ‘Fathers to keep them down and which fires them up, keeping the anger real.

‘Public Enemy Number One’ for starters is Thunders’ Heartbreakers Anglicised into a soundtrack to an unmade movie about the Krays.  ‘Coz I Said So’ is like The Godfathers playing the theme to a Sweeney re-make set in the 80s.  ‘She Gives Me Love’ is fantastic, as tender as the band gets and something like Motorhead playing The Beatles.  ‘I Can’t Sleep Tonight’ is dedicated to The Ramones. ‘If I Only Had Time’ still sounds like their greatest hit single despite never even being a single, let alone a hit.  ‘I Want Everything’ is perhaps their defining song and the pinnacle of a whole range of peaks.  It sums up the 80s with a straight-faced, hard-edged irony and (originally) a blistering solo from Kris Dollimore.  Del Bartle, the current guitarist (and ex-Sid PE member), does a pretty good job of replicating it.  Breaking a string gave the drummer a chance to hone his stand-up act.

“I’ve been accused of not smiling for the whole tour” announced Peter talking about the SLF road crew, it was the last night of the tour, ” So for one time only, here it is….ready?” before beaming a cheesy, wide, pained smile whilst standing to attention, trying to hold it for a full five seconds to cheers and whoops.

“Fuck that”,  he exhaled, reverting to sullen, bottled-up-rage.. “This one is called “Birth, School, Work, Death.” 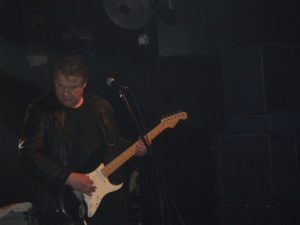 Maybe that is why The Godfathers were never huge.  The general public don’t like the truth rammed down their throats. They wanted big, smiley happy tunes like ‘Sit Down’, ‘Size of  a Cow’, ‘Park Life’, ‘Prime Mover’…. not a song about reality, even if it did subvert it and turn it into a fuck-you anthem.

But for a few years, The Godfathers were the best band on the planet;  I’ll never forget seeing them at Mr Smith’s in Poole on their first tour.  We sat outside listening to the soundcheck (through the solid concrete wall) and the guttering was rattling so much it was as if it was going to collapse.

Then at Southampton Uni,  the Astoria ( when Jerry Sadowitz supported due to Pauline Murray being ill)  and at Reading Festival in about 88.   “This is the Persil White you only get with The Godfathers you dirty hippies…”  said Peter tugging his shirt. They closed with ‘Fight For Your Right To Party’ and ‘Anarchy In The UK’ that night and blew every other band away, yeah including the then practically unknown Nirvana.

The Godfathers are no longer in their prime of life, there’s no point pretending, but they do still show flashes of sheer musical excellence and little reminders of when they were untouchable.  They are worth seeing still and the  reissues of their old material and the recent Jukebox Fury album are essential purchases.

All words and, on this occasion photos as well, by Ged Babey, whose archive is here.