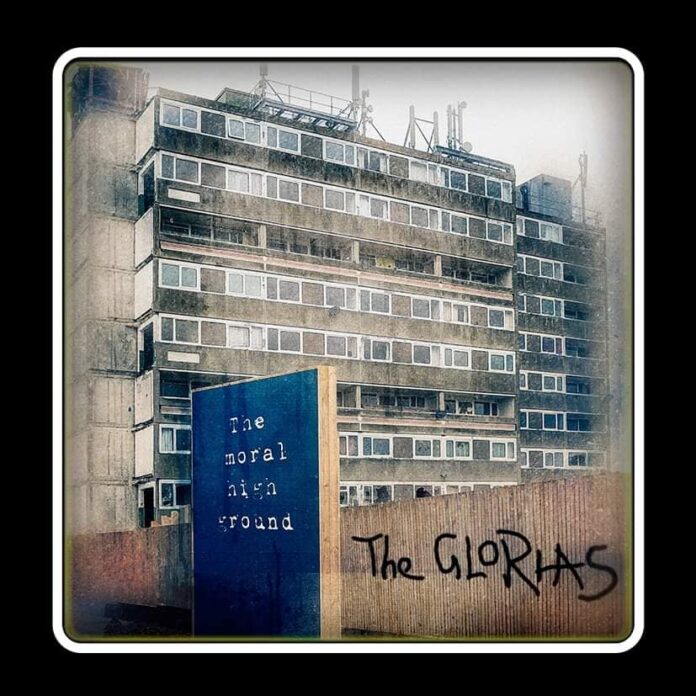 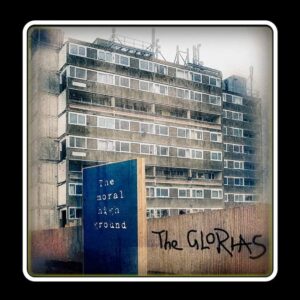 The Glorias – the Moral High Ground

This is a solid rock’n’roll album. 1970’s Detroit style. A dash of New York. A touch of the Westway… and a whole load of Pompey.  A bunch of punk-inspired no-spring-chickens doing what they love and doing it well, with no gimmicks or frippery.  The Glorias are a decent band. A no-nonsense rock’n’roll band.

Based in Portsmouth, the two of them that I’ve known for years from previous bands are guitarist Bill – from Night of Treason and stand-in for The Straps and Nish from Good Time Charlies / the Green Hornets. Two rock’n’roll obsessives who play their heart out onstage. Nish grandstanding with bass pointing to the ceiling and Bill throwing classic shapes as he squeezes out great solos.

Drummer Den ‘was in a series of bands back in the day, nothing special really’ (his words) and guitarist Mark, ‘has spent his life building and fixing the amps, pedals and various other stuff for pretty much EVERY guitarist in the Portsmouth area, he really is a noisy little genius’ according to Den.

Frontman and singer Jez was in The Idol Rich and House of Cards in the 80’s with Nish,  before moving to Denmark for 30 years according to what I read here.

Their collected history and combined man-hours put into the local music scene explains why they are a much-loved and popular local band.  But it also means they have to measure up against their former glories.

The Good Time Charlies were named after a phrase used in a record label rejection letter received by contemporaries the Mild Mannered Janitors. Over five albums they established themselves as an unbeatable garage rock band with a knack for punchy, witty songs. They were up there with the Hives almost and even John Robb (who has seen thousands of bands) remembers then from a support slot with Gold Blade.

Night of Treason after years as a fun punk-karaoke covers band, released a classy Clash influenced album of original material, Gentlemen and Hooligans which encapsulated everything about small-town provincial punk aspirations and misadventures.

So you can see what the Glorias have to live up to… and despite being a progression from their debut Life’ll Get Ya, reviewed here by Russ Bestley, it doesn’t quite reach the standard set, simply because it was so high.

The thing I personally can’t get past is Gez’s ‘rawk an ro-o-o-ollla’ singing voice. It has too many trademark Ian Astbury-isms in the intonation for my liking.  Woo’s, Awriiight’s and C’mon’s. He’s not got a punk snarl, bark or whine and can hold a note and carry a tune. Maybe he’s just too good a singer for my tastes.

On All I Want, one of the more immediate songs, he croons in a bit more of a Vanian style over a tune which somehow sounds sorta like the Clash playing Gimme Danger. And it works.

Enemy of the State is a decent chunky mid-pace rocker which goes for a Raw Power feel but ends up a bit more Cold Metal Iggy.

Slowdive is decidedly not the Banshees song and Look the Other Way loses me with its mention of Lucifer and Americanisms.

Better Than This is better, sounding a bit like the recent material from the Professionals were it not for an inadvertent bit of Sham-style riffing.

The terrace anthem Glorious is an air-punching crowd-pleaser in the making – the repeated title chanted in the chorus will of course end up being ‘Glorias’ bellowed back at the band by the drunken Pompey rabble which make up their loyal fans.

Magic Money Tree is probably the best track on the album in that it succeeds in melding together some kind of social comment and plain rock’n’roll energy and noise.  Taking Theresa Mays phrase about the apparently non-existent ‘magic money tree’ and metaphorically shaking it – in a shake, rattle and roll style -so that ‘do a little shaking now’ becomes both an instruction to dance as well as an exhortation to kick out the Tories as well as the jams, motherfucker.

Taken on its own merits it an album which the band are rightfully proud of – and it does rock, but it’s not quite as strong as i think they want it to be. (And after calling me a wanker next time i see them they might agree with me in six months time.)

Maybe they should record a live album.  Perhaps songs which don’t try quite so hard to be socio-politically relevant are the way to go?  Which was better (or which do you prefer) Suspect Device or Teenage Kicks? Both were a reaction to the times the bands lived through.

I feel terrible not giving the Glorias a thoroughly positive review because they are sound blokes.  But – this is just one persons opinion.  There will be plenty who think I talk out my arse.

Make your own mind up.  There are some good tunes and some great playing on The Moral High Ground. The Glorias are an honest decent, independent rock’n’roll band. They do this because it gives them a purpose and their lives meaning ,and a way to express themselves. And because it’s fun, glorious, rock’n’roll fun… which when you create it yourself and it has a sense of community, is always ‘political’.