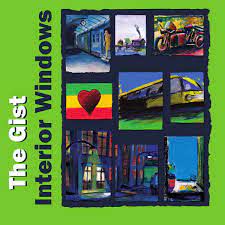 The follow up to 2017’s Holding Pattern, this new album brings together Stuart Moxham’s brainchild the Gist’s first single This Is Love/Yanks, their contribution to C81 Greener Grass and new or alternative versions of songs from the band’s back catalogue…LTW’s Ian Canty enters the world of one of the UK’s best songwriters, period………

The Young Marble Giants were simply incredible. They went way beyond the usual reaction to music, touching hearts, mine included. At a time when noise blaring and tempers raging mostly ruled, they made their mark with deceptively simple, quiet music that reached out to one’s soul. Alison Statton’s cool, clear delivery was a joy to behold of course, but this would have counted for nought without the beautifully judged songs and arrangements of Stuart Moxham. It was a perfect combination, certainly like nothing else around at the time and all the better for it. However such brittle beauty couldn’t last and YMG said their farewell to the world with the instrumental Testcard EP in 1981. By this time his next project the Gist was already underway.

This was to be a looser aggregation than the Giants, as Stuart brought in various singers and players along the way as each piece suited, with him being the only constant presence. Signed to Rough Trade they produced the excellent debut single This Is Love/Yanks in 1980, both sides of which are included here. These two offerings were taped at the time of the last YMG session for the Testcard EP. After the decent showing of this record, sadly Stuart suffered a bad motorbike accident which halted the Gist’s progress. A second single Love At First Sight and the Embrace The Herd album followed, but not matching YMG’s sales they were unceremoniously dropped by Rough Trade. Both records had made the Indie charts, but with Stuart not happy with the album in particular so the name was quietly shunted aside as the Gist transitioned into the Original Artists.

After a lengthy break in activities Stuart Moxham has gone on to many other projects and a pretty damn fine solo career, so for a long time the Gist remained a dim and distant memory. However some favourable critical reappraisals of Embrace The Herd prompted the well-received release of Holding Pattern in 2017, culled from the Gist’s unissued archive. The success of that collection means another delve into the back pages of the Gist was warranted and the result of this is Interior Windows.

Some people even went as far to describe Holding Pattern as a worthy successor to Colossal Youth and listening to Interior Windows there are clear glimpses of what might have happened if YMG had recorded a second LP. But more than that, Interior Windows is great in its own right and very much a Gist recording. There is a couple of off-cuts in the form of a very brief interlude entitled C ME and the self-explanatory Piano Piece, but they are both charming and add to the flow of the record. For the most part though, the strength in depth that Stuart had in the Gist from 1980 to 1982 is ably demonstrated and the songs presented here show that Moxham’s muse was still as finely tuned and creative as ever.

Starting off with Yanks, we then move onto Stones And Sunlight #2, also recorded at the same “tail-end of YMG” session. A steady drum (machine) beat, acoustic guitar and synth are added to a sensitive bass line, making for an exquisitely light and bewitching air. The haunting, moving line “And so I go into a corner, a refuge for my disorder” in Yanks cuts to the bone, the song an enigmatic but appealing study of loneliness. Stuart’s voice is pleasingly full and rich on here, in contrast to a lot of the Gist’s Rough Trade material.

Stones And Sunlight #2 has a real township jive feel and is sung by Deborah Pritchard, who towards the end of this disc also performs Stones And Sunlight #3. This third version is performed by the Pepper Trees, a duo of herself and long-time YMG associate Spike Williams (Weekend, Statton And Spike). The only track not to feature Stuart Moxham at all, #3 is of a vastly different hue to 2#, having a kind of dreamy 60s pop epic setting with strings and synth glides, dropping the jive altogether but working just as well.

Next comes Being True (band version), which was featured in another guise on Holding Pattern. Here it is nicely punchy and almost in a 60s garage mode, especially the organ. They could have easily competed with the likes of Aztec Camera for chart success on this showing. This Is Love is of course a killer single with some fine clipped rhythm guitar, before some lovely restrained soloing kind of like Television circa Little Johnny Jewel. Again Stuart’s voice is given a rare chance to shine properly. It is followed by Greener Grass, which was the Gist contribution to C81. This “Joe Meek meets Dub Uptown” instrumental is a great deal of fun and was again recorded at the same time as the This Is Love/Yanks single.

Wendy Smith is called into service on the Public Girls (demo), this one really could have fitted right onto Colossal Youth, an absolute cracker and textbook case in restrained power. A perfect performance of a great tune, the shiver of organ tune that emerges towards the end is both spinetingling and curiously reassuring in that is possible. This superb effort is followed by the weird doo wop of How To Be, throwing the listener initially, but really that’s all part of the Gist’s charm. They never stayed still, despite the often serene atmosphere.

The Landmark takes us back once more to that first Gist/last YMG session and that edgy guitar sound. This could almost be a blueprint for the Smiths, who let us not forget were still a couple of years off forming in 1981. Stuart’s cool voice and guitar inventiveness are a wonder to behold here. After the brief C ME, an absolute pop classic Working It Out follows. This is all Stuart’s own work, but multi-layered, warm, loveable and lush, so beautiful. “You’re so delicious and I’m such a lout”. Release it as a single, it should be a massive hit by rights!

Later sang by Barbara Manning in Gist follow-on band the Original Artists, You Were The One is a lively dance piece with a zig-zagging organ and it is followed by the oddball synth washes of Unsettled Hash. Here Comes Love #2 is fast and rough sounding, but full of drive as it weaves in a lovely, entrancing way, another great would-have-been single in waiting. Then we have aforementioned Piano Piece and Stones And Sunlight #3, before this album ends with Mistakes In Love. This song dates from the last days of the Gist, upbeat and cool, hiccupping vocals – pop is clearly so easy for Moxham, but he never coasts.

While listening to Interior Windows I’ve thought a great deal about why I find Stuart Moxham’s work so attractive. I think that the uniqueness of his viewpoint which eschews the usual rock & roll clichés for a more down to earth foundation, his great taste and restraint in arrangement and overall the sheer accessibility and attractiveness of much of his work. This disc proves that in his cast-offs he has more quality than 90% of artists have in their “Best Ofs”.

In fact this is like a greatest hits from a parallel universe – a much kinder, more straightforward one, where humans flourish to their full potential, rather than fail in the hierarchical workaday environment we live in. For far too long in the shadows, Stuart Moxham is one of our great pop music magicians, effortlessly conjuring up jaw-dropping beauty, edgy angst and true life wisdom right up to today. You would be a fool to miss this one out if you are already a fan and if not, you will find few albums made up of demos that are better to start off a musical love affair. A divine collection.