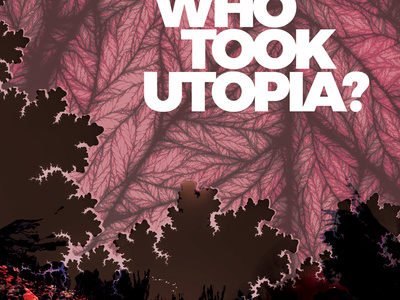 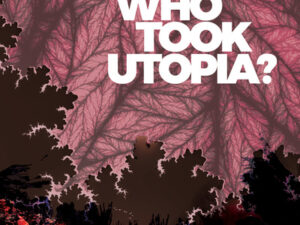 As the sub-heading suggests, The Girobabies are a difficult one to pin down. Hailing from Kilwinning in the heart of Burns country, it’s maybe somewhat appropriate that lead vocalist Mark McGhee is a man with poetry writ large upon his soul. The album is an intriguing hotch-potch of influences and weirdness that makes it one of those records that pulls you in over several listens and often has something unnoticed that you hear each next time. They’ve been making a bit of a name for themselves over the last few months with a virtually sold-out album launch which people have been talking about ever since. Two previous EP’s were a great starting point for a band who’ve really come of age.

Who Took Utopia? is a cauldron that has elements of Brian Eno and David Byrne’s “Bush Of Ghosts” album, early PiL bubbling dub, the dissonant funk  of Gang Of Four and shimmering keyboard flourishes. Add to that McGhee’s psychobabble lyricism and guitars that blaze and flash at unlikely moments and you’ve an album that intrigues and conspires over its journey into the heart of McGhee’s darkness.

Bring Potions is far and above the central track on “Utopia”. Five and a bit minutes long, it eats its way into the gray matter as surely as the rain falls on Glasgow. The rhythm section are assured throughout and particularly here; locked together they at times recalls the best of modern dub and world music. McGhee has a background in hip-hop and it shows as his words wrap themselves sinuously around the music. Phrases and words jump from the tracks and whilst I’m not particularly clear about what it’s all in fact about, his stream-of-consciousness and clang associations are captivating. With bassist Jo D’Arc contributing vocals on the coda, the two breathlessly declaim “not in my name, not in my nature” as the music propels and grooves.

McGhee has a little of Mark E. Smith’s deranged preacher man about his delivery throughout the album. Opening track Equinox is typical; slithering bass and choppy guitars weave in and out as McGhee declaims the state of the world he witnesses. The Girobabies are a band steeped in the nightlife and sub-culture of Glasgow and some of the material is akin to eavesdropping on a late-night pub conversation.

The impending single is Late Night Sketchy (which they’ve asked lots of artists likely and less-so to remix) and is an exercise in clever lyrics and smart hooks. I could probably live without some of the local colloquialisms (“taps aff/caps on” etc) which I think date and parochial-ise the album a little but that’s a minor grumble.

This is a band who’s “mental gigs in folks flats” became legendary for their unhinged, Buckfast-inspired lunacy. The album has taken the tone of that madness down a few levels and is all the better for its control and discipline. I reviewed the album for Vive Le Rock and in the sub heading I said something like “Dub-funk meets grunge-punk in Glaswegian psychotherapy clinic waiting room” which I think probably says it better in one sentence than the paragraphs above.  Music that’s difficult to pigeonhole is often the best and with Who Took Utopia?, The Girobabies have birthed a gem.