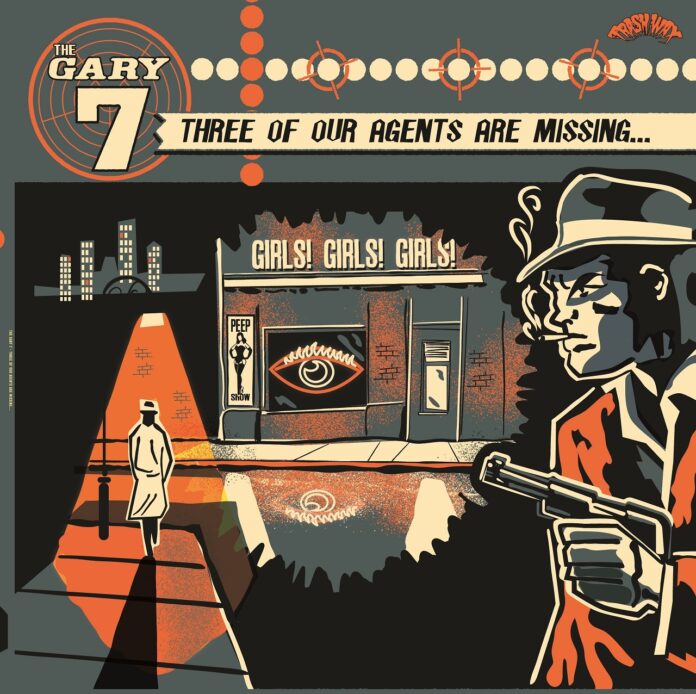 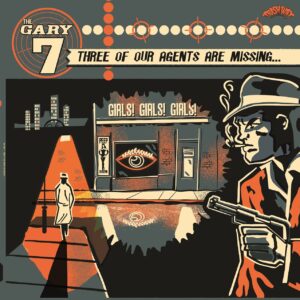 The Gary 7: Three of our Agents are Missing… (Trashwax)

The Surf/Spy Movie Instrumental. From the James Bond Theme to Our Man Flint. From the Shadows Frightened City to the Theme from Randall & Hopkirk (Deceased), was basically the best music I had ever heard at the time I first heard it (in beautiful, innocent days of pre-teen childhood, pre-punk)

It pre-dated my interest in pop and rock’n’roll… it was the Beginning of my taste in music. Always the soundtrack to action or suspense. Glamour and espionage. Good guys against the forces of evil. Music so evocative of the time that fifty years on it still sounds just as exiting, Even when it is ‘faked’. Like this…

Trashwax release their own records as well as being ‘the one stop shop for your vinyl fix of Trash, Wild Rockabilly and Wigged out and Fuzzed up Garage, Old School Psycho-Rockabilly, Surf & 50’s & 60’s Punk Trash’. And this is one such beauty.  This is what they say about it…

Fourteen blistering Instro tracks of Spy-Surf. More ‘Our Man Flint’ than James Bond, more Link Wray than the Surfaris and these guys really live by the Sea, Southsea (Hampshire) to be precise. Rock out to ‘Morocco Mole’, Twist on the beach to ‘Torpedo Assault’ and live the Stasi nightmare that is ‘Night Train To Gdansk’.  The gritty, cold-war era style artwork by our man in Brighton, the over talented Chris ‘Sick’ Moore.

None of the band are called Gary and there aren’t seven of them but they are made up of former members of The Green Hornets, Emptifish, Good Time Charlies and Thee DB3.

Experienced players who know their chops they could easily resort to cover versions of Surf classics or add twang to punk covers or TV themes, but instead they write their own within the chosen format.

They don’t have the novelty aspect of American counterparts Man Or Astro Man? Or the Hank & Co obsession of Shadowy Men On A Shadowy Planet.   At their best they are possibly on a par with the best god-damned Surf-punk band I ever saw (live) the Canadian band Huevos Rancheros.

When I think of surf-punk and spy-theme instrumentals though, the two best examples – perfection both of them – and The Gary 7 would probably agree – as they approach a similar kind of magnificence on this album, are these.   (And I put ’em here as sheer self-indulgence and because the Gary 7 and Trashwax avoid putting any of their stuff on YouTube or indeed online where-ever possible.  And it easier than describing all 14 tracks in words!)

So , if you want an album that approaches that kind of thrilling sound and glorious style… you need Three of our Agents are Missing… in your life and record collection.