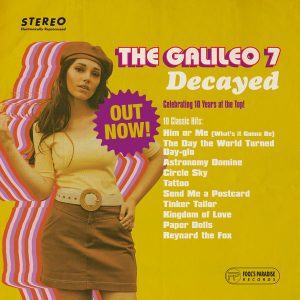 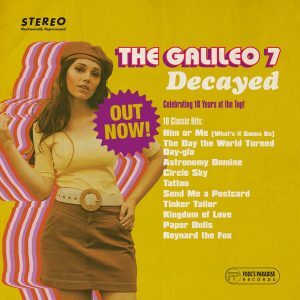 Medway’s purveyors of psych-garage-rock-pop, lead by former Prisoner Allan Crockford, release a special album to celebrate their tenth anniversary. Conceived and mostly recorded last year before the world changed… Ten studio versions of covers that they’ve played at various gigs over the years.  A practically perfect fantasy psychedelic garage collection says Ged Babey, despite not being an expert on Freakbeat or knowing half the originals.

This album, start to finish, is just such an escapist joy! It’s like the Groovy, Swinging, Psychedelic Sixties never ended… (yeah, I know, some of the songs date from the 70’s and 80’s…) It’s the imaginary soundtrack to the best unmade in England Sixties movie.

The Galileo 7 are another offshoot band from the Medway Delta scene which gave us The Milkshakes and The Prisoners and whose various members, Billy Childish, Mickey Hampshire, Graham Day continue making cool and interesting music today under various guises.

Allan Crockford was bassist in the Prisoners, played in the James Taylor Quartet, the Prime Movers, The Solar Flares and a half dozen other bands since the late 70’s but for the past ten years has lead the Galileo 7 with his wife Viv (keyboards), Mole on drums and Paul Moss bass. (Joss Huttons full band bio is here )

They have a whole 6 album back catalogue of their own they are keen to point out and this covers album was only ever going to be ‘for fun’. Thing is, it’s simply indispensable – the same as Blue Orchids covers album Magical Record was last year.

It could almost be viewed as a concept album in that the songs cover different aspects of life, relationships, imagination and conclude, maybe, that you’ve just gotta make the most of the trip.

Galileo 7’s storming cover of Pink Floyds Astronomy Domine is the centrepiece of the album.(Audiophiles who like their music to sound pristine and the clarity High Definition be warned however, this is a Garage band. To this old punk though, it sounds unbeatable.)

Talking of which, the version of The Day The World Turned Day-Glo is a surprise, in that the sax line is played on an organ – and still sounds fantastic. If you remember the old Weekend World TV theme -the organ sounds a bit like that!)

Viv’s vocal is spot-on -not a Poly impersonation, just performed well, with an obvious affection for the song. It proves if anything that X-Ray Spex were literally a psychedelic, as in ‘mood-altering’ band without the paisley & the drugs.

Him or Me (What’s It Gonna Be) a 1967 song by Paul Revere & The Raiders is archetypal Merseybeat but is transformed at the hands of the 7.

Paper Dolls is a storming, sublime piece of Power Pop – originally by the Nerves (who also wrote Hanging On The Telephone, a hit for Blondie pop-pickers.)

Tattoo by the Who is from their third album 1967’s the Who Sell Out – he says authoritatively – but I confess, I never knew the song and don’t have the album – but what an absolute classic song it is?

Terry Reid is a new artist to me too , but the main riff in Tinker Taylor I knew because it was kinda acquired secondhand by Manic Street Preachers for their Jackie Collins Existential Question Time

Circle Sky is from the Monkees Head as we all know…and Galileo 7 hammer the hell out of it.

Send Me A Postcard was originally by Shocking Blue of ‘Venus’ fame  from 1968 – and is one of those songs which somehow everyone knows from the days of Radio 1 when Alan Freeman was King (Not ‘Arf!)  Just a solid, 24 carat 100 % classic tune evoking mascara, mini-skirts and that Sixties Beatgirl vibe.

Then comes another classic which I should’ve discovered forty years ago,( had I not been wasting time with Sham and the Cure…)

Kingdom Of Love is a Robyn Hitchcock composition from the Soft Boys Underwater Moonlight and the Galileo 7 make it their own. Creepy but intoxicating psychedelic pop…

In his biographical essay on the band taken from their website, associate and fan Joss Hutton says quite rightly…

In an age when peeps of a certain age are going goo-goo googly-eyed over the XTC back catalogue, rediscovering all manner of 60s psych-pop and garage treats, and lionising such moderne combos as Thee Oh Sees and Tame Impala, the fact that the Galileo 7 haven’t reaped comparable plaudits seems just plain stoopid…

I couldn’t put it any better myself – so haven’t.  Just a great band, a majestic album of astutely-chosen covers which create a whole which is more than the sum of its parts.

Like fellow-travellers The Total Rejection, who alerted me to this release, the Galileo 7 are just a perfect escape from the present, music from another time and space, but thrillingly alive and now.

Allan Crockfords You-Tube Channel has loads of great live footage going back years… enjoy!  Including a playlist of Lockdown Cover Versions of which my favourite has to be this…