Home Blogs the future is 3D : how 3D printing will become the new... 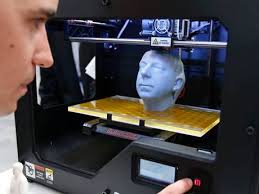 The future is an interesting place. A sic fi wonderland that is 5 minutes away.

A tantalising just over the horizon world were there are few certainties, apart from war in the middle east and the same four teams dominating the Premiership for eternity.

There is also the fast forward in technology which for every plus brings its own problems. It’s like cultural chess. Technology giving with one AI robotic hand taking back with another digi-claw.

Musicians have been dealing with this for years.

The collapse of the music business was greeted with much laughter from the rest of the world who perceived music as a fools paradise of spongers and wasters who didn’t deserve to get paid for their high decibel hobby. The panic in the music industry from musicians about the loss of earnings to the pirates was portrayed as digital whinging from the bands who were obviously dripping in Rolling Stones style wealth against those plucky pirate chaps who were taking pot shots at the fat and lazy musos.

Of course the reality was always slightly different. The rich just got richer and the lower down the pecking order musician types just got skinter. The pirates sold themselves as heroic figures who were saving the bands from the evil grasping corporate claws of the major labels. In the real world at least those suits would pay for the privilege of ripping the band off. Now we are left with a battlefield were only the fairly wealthy can afford to take the risk to make music. A middle class playground.

Fair enough.. The world can live without music and the soundtrack to the 21st century can be Ed Sheeran for ever. The music industry is fucked and that’s progress and progress is everything.

The next step in this evolution will be 3D printing.

At the moment it looks faintly innocuous. A charmed world of back street operations printing out 3D toy cats and you can marvel at the way the can create such accurate figures from thin air as the plastic whirrs around. This is a technology in its infancy that is moving quickly. The machines are getting better. The materials are getting better and as progress does its progress thing we are getting to the stage where a whole car can be created on a 3D printer in your back room. If you have a back room big enough that is…

This sound great. You would never have to go to the shopping mall again. You will never even have to interact with any grubby humans again. But there is a catch. Like music it won’t take a genius to work out how to copy someone else’s designs and patents and put out under their own banner. Already the those lovely Pirate Bay people are on the case and for every piece of manufacturing that people were making a living from in the old model there will be another going out for free.

Within a decade 3D printing could have done a strange thing, aided and abetted by Pirate Bay it will have collapsed what is left of the worlds manufacturing industry. Everything you ever wanted will be unregulated and free and grabbable from the internet. We will be living in a world were everything is for nothing and whilst you won’t get paid for anything at least you can steal it from the internet.

It truly is the end of a type of capitalism. Welcome to the something for nothing world. A sic fi utopia. Or is it?