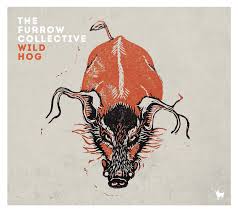 The second album from the quartet of Emily Portman, Lucy Farrell, Alasdair Roberts and Rachel Newton who make up The Furrow Collective – each individuals with star quality in their own right – sees them build on 2014’s ‘At Our Next Meeting’ to present a set of songs which criss crosses the English to the  Scottish traditions and beyond.

Having struck gold with their debut, garnering all manner of Folk Award nominations, the bar of expectation has been set duly high. Last year’s ‘Blow Out The Moon’ EP kept The Collective in the frame and now it seems like they’ve followed the template of success to build on a solid foundation.

The focus once again lies in English and Scottish sources,  seeing the four backed up by the production work and Hudson Records backing of Andy Bell as well as involving Trembling Bells drummer Alex Neilson and Stevie Jones from Sound Of Yell on double bass to fill out their sound. Having said that there’s a shift towards interpretations which invoke  a  strong Appalachian tone and texture. The opening   ‘Wild Hog In The Wood’ followed rapidly by ‘Dear Companion’, are immediate markers in a shift in direction and one which makes the declaration from the off is that these songs have spent their life on various meandering journeys until landing briefly in the FC lap for their own particular coating, before moving on once more.

There’s a sparse take on the well known ‘Barbara Allen’, the Coracle String & Reed Ensemble being sampled in from the version on  Emily Portman’s own ‘Coracle’ album and the soothing moods of  ‘Willie’s Fatal Visit’ bely  a gruesome tale accompanied by a pleasant melody, yet provide a contrast with a trip to the dark side. ‘Prince Heathen’ sets the tone which is brought to a hauntingly dramatic  fulfilment on ‘Polly Vaughn’. Once again, the song’s gestation into Lucy Farrell’s interpretation is revealed  within alongside the fascinating song origins which are all detailed in the sleeve notes  for investigation.

Despite the rich musical heritage of the band, they continue in a vein of starkness on ‘Beneath The Window Of My Cell’ – a song published by Ewan MacColl and Peggy Seeger – presented over a droning ambience with the warning  “never stay out late at night nor keep bad company” concluding another set which confirms The Furrow Collective as original and inventive  interpreters of traditional song.

Watch the video of ‘Wild Hog In The Woods’ from the album here: