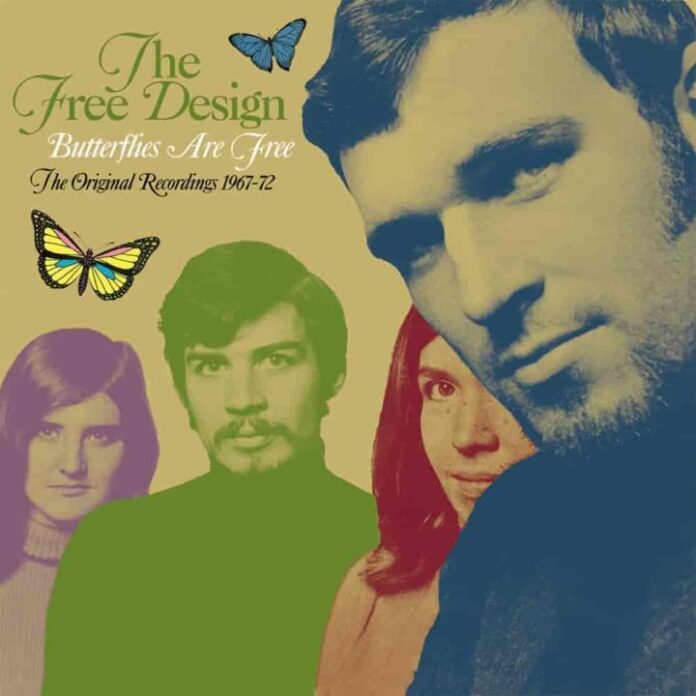 The Free Design – Butterflies Are Free 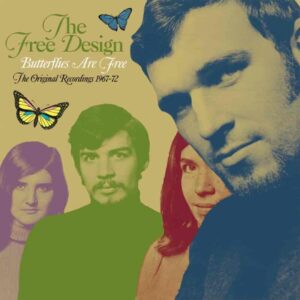 Subtitled “The Original Recordings 1967 – 1972” this boxset includes the seven albums plus non-LP single sides recorded by Dedrick family band The Free Design, big favourites of Stereolab and High Llamas among of other…LTW’s Ian Canty wakes up in the early 1970s’ sun…

Though US vocal group The Free Design didn’t have any hit success on this side of the Atlantic, they proved highly influential. In fact, the world that I took my first tentative steps in, sounded very much like it was created by them. They produced a blend of excellent voice harmonies, easy listening, folk pop and even a hint of the more childlike, whimsical end of psychedelia. It was a mixture that was packed with a fresh, good-natured kind of 1960s optimism for a better, simpler world. This was a general feeling that had not quite petered by the 1971 of my first music memories, their influence stretching into the music that accompanied kids TV shows of the time.

The Free Design was the sound of pure sunshine and happiness really, with all the worries of the real world blown away by a catchy refrain and mellifluous vocal harmony. Something that brought back warm memories of balmy summer days and possibly for the kind of idealised childhood which more likely than not didn’t exist. But anyway it was more than pleasant to pretend it did, even if only for the music’s duration.

The Dedricks were a musical family, with father Art specialising in the trombone plus musical arrangement and uncle Rusty was a jazz performer. Chris Dedrick, who would become the powerhouse of The Free Design, was influenced in his work by his father Art’s arrangement skills. A move to Queens, New York lead to the band forming among the siblings in 1966. His sister Sandra and brother Bruce made up the rest of this first Free Design line up.

They began attending and performing at the Greenwich Village folk clubs and modelled themselves on the successful vocal groups of the time, like The Four Freshmen and The Hi-Los. But they also had the edge of Chris’ sophisticated compositional skills and the Dedricks’ own idiosyncratic singing talents.

First LP Kites Are Fun arrived in April 1967 on Enoch Light’s Project 3 label. A bright, enchanting collection, it was all but lost in the run up to the summer of love. The title track was the only Free Design record to chart and even that was only attained number 114 on the Billboard listings. Nevertheless Kites… was an unique recording, blurring the lines between psychedelia, folk, pop and easy listening in a way not seen before. The album practically marked out the sunshine pop boundaries, before that genre even existed.

Though the LP includes covers, among them a dreamy version of Paul Simon’s 59th Bridge Street Song (Feelin’ Groovy) and The Beatles’ Michelle, their original material is more interesting. Bruce Dedrick’s Umbrellas is wonderfully light and playful, a real shot of pure joy. It is The Proper Ornaments, penned by Chris himself, which admirably demonstrates his arrangements skills. Choral voices, skat singing and also his own delightful trumpet playing are all skilfully deployed to enhance the musical landscape.

My Brother Woody shows that for all the work that went into the music intricacies contained therein, they didn’t skimp on catchy choruses. Some neat organ work embellishes Make The Madness Stop, a real masterclass in pop sike melded to folk protest lyrics. Also one should not forget that title track. The flute flurries and quick vocal tempos are The Free Design’s breezy method statement, something is instantly memorable and adorable too.

Ellen Dedrick’s arrival brought The Free Design up to a foursome in time for the band’s second LP a year later. Such was their wholesome appearance and outlook that one could have been forgiven for thinking You Could Be Born Again was a recruitment record for some sort of Christian sect, which was fortunately not the case. Again they bring their own vocal and arrangement talents to be bear on a number of covers. Eleanor Rigby and the Turtles’ Happy Together are both well repurposed and The Mamas And Papas’ California Dreamin’ really constituted a good-time open goal for The Free Design really.

Elsewhere the title track is another of The Free Design’s real charmers and the fast and lively Quartet No.6 In D Minor unites folk pop with a lively near but not quite-garage organ sound. The choral, ghostly chill of the intro Ivy On A Windy Day thrills and the jolly Daniel Dolphin makes good use of pipes and guitar strums. There are no massive steps forward, just consolidation, though there is a sliver of blues feeling in the closing item An Elegy. You Could Be Born Again measured up to their debut well, with most everything present enjoyable enough and very well performed and sung.

The band’s ferocious work-rate meant that Heaven/Earth arrived a year on in 1969. Again there wasn’t a massive shift in sound or material. The Free Design were all about playing to their strengths I think. The very fluffy and gentle folk rock of My Very Own Angel really welcomes the listener to this LP and the dreamy ballad style given to Tim Hardin’s If I Was A Carpenter is just lovely. This is generally a more laidback and quieter record than the first two albums, with only the guitar fuzz that begins jazz oldie Summertime really getting things away from a more sedate pop/easy sound.

Having said that, You’ll Be You And I’ll Be Me has delightful female vocals plus a beautiful arrangement and Where Do I Go (from the musical Hair) is prime baroque pop. I have to say 2002 – A Hit Song is my favourite here, great energy and anything that makes me think of the Kubrick film and Look Around You at the same time gets my vote. It may be that they were short of material in the quick turnaround of releases, as after the first self-penned side of the original vinyl, the flip feels padded out with covers. I have to say it takes the edge of this selection, but it still isn’t a bad record at all.

Another year for The Free Design and 1970 saw two albums released. The first of these was Sing For Very Important People, which recycled some previously recorded tunes along with newies to put together by the band, in order to make a LP for children’s ears. Kites Are Fun and Daniel Dolphin get redone and the Sesame Street theme song is covered too. Ellen Dedrick wrote the cool drift of Round Go ‘Round and I detected even a little funk in the bass of Bubbles. There’s also some nice guitar on this and also their trademark smooth and snappy vocals of course. Despite the presence of previously released songs, this LP works well right up until and including the acapella of the last song Lullaby.

1970’s second platter was Stars/Time/Bubbles/Love, which unsurprisingly kicks off with Bubbles again, though it seemed a touch more psychedelic here. Butterflies Are Free is another delightful folk pop outing and I’m A Yogi, with sitar and phasing on the vocals, could be seen as either a spoof or earnest. Either way it is a lot of fun and the mix of easy listening and blues never sounded better than on the chirpy Howdjadoo. But for me this one is a lesser work in their canon, one where the formula wore a bit thin in places.

I suppose you could call their first album of 1972 One By One their soul record. Though obviously The Free Design’s vocal stylings remain intact, the musical backing does have more than a hint of rhythm and blues about it. It all helps to re-energise the Design and they even have a crack at The Doors’ Light My Fire along the way. The gentle and heavenly title track doesn’t really give a hint of what is to come, but I Like To Love juxtaposes a soul rhythms with their pure and easy-going voices and it really works well. Go Lean On A River is likewise impressive and Going Back is smooth and souful too. The carefree and soaring Friends (Thank You) ends One By One with a fitting climax, a refreshing and varied collection.

The last LP of their original incarnation There Is A Song, arrived later in the same year. In the interim between the two records, The Free Design had left Project 3 for the Ambrotype label. They had become frustrated with their lack of progress and a fresh start was required. There Is A Song found them on good form, with the ructions around the band not impacting on the sounds contained one bit. They dipped into true acapella on Pineapple Crabapple and Fugue and paid tribute to one of their inspirations with the light folk of Peter, Paul And Mary. A solitary flute and country guitar takes the title track ballad in different directions and the slow and jazzy A Child Is Born pleases.

The final section of Butterflies Are Free rounds up the various single tracks and rarities. The single and alternate takes are for the big time Free Design fans who are this set’s target market, but the other offerings were more intriguing for me. Ellen Dedrick’s solo single Nature Boy/Settlement Boy combines cool folk pop with a sunny, lovely slowie on the flip. Their 1968 Christmas single Close Your Mouth (It’s Christmas) has some prime floating brass and the busy Never Tell The World is upbeat and heavenly. This is an interesting delve into the lesser-spotted Free Design and one for the completists among us.

The Free Design were very much their own thing and Butterflies Are Free is better heard in smaller doses. Listening from beginning to end might be a little much, as though they had an ace sound it seldom varied, perhaps One By One aside. Nevertheless theirs was a music concoction worth savouring and most everyone looking to harmonise vocally in expansive pop music after them at least owes a measure of debt. At their best the Free Design were both comforting and exhilarating – a mighty difficult trick to pull off. There is everything one could ask for here for Free Design or harmony pop fans and anyone who just wants to listen to music that makes you feel happy is quids in too.