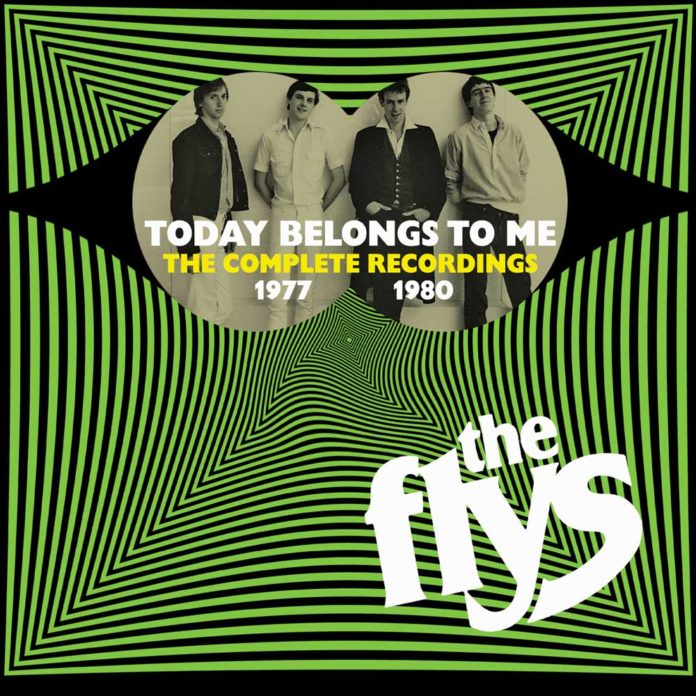 The Flys – Today Belongs To Me 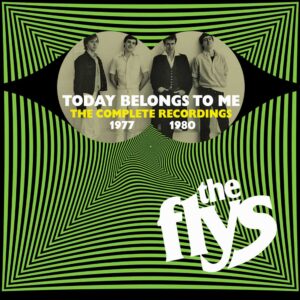 A new 2CD collection subtitled The Complete Recordings 1977 – 1980, this set features everything the Flys recorded for the Zama, EMI and Parlophone labels and also a number of previously unreleased tracks….LTW’s Ian Canty is a fly on the wall during the band’s late 70s heyday…..

Coventry outfit The Flys had their roots in self-confessed hippy band the Midnight Circus, formed in 1974 and named after a track from the Pretty Things’ LP Parachute. Actually, though you ought to whisper it….a lot of 1977 punk bands were the exactly the same. After all they mostly were musicians or fans to start with anyway, ones that wanted to feel part of the music scene but felt rejected by it for one reason or another. Neil O’Connor, the band’s leading light, set things in motion by giving schoolkids Neil Freeman and Joe Hughes guitar lessons. Soon the beginners had picked up enough for the three of them to start a band. The Midnight Circus laboured away through local gigs and recorded a demo tape, which the band’s new manager Chris King (brother of Pete, who had taken over the drum spot from Paul Angelopoulos) sent to a few major labels to little response.

There were a couple of crucial turning points for the Midnight Circus in 1977. The first was Neil attending a Clash gig in Birmingham and the other was being befriended by a punk rocker called Adrian, who turned the band onto the Damned and Buzzcocks. By the summer the group was rebranded as the Flys, reasoning that their abilities and interests brought them into line with the punk wave.

Adrian had a contact with Pete Shelley and got the newly christened Flys a support slot for Buzzcocks’ Coventry gig in the autumn, which led to them becoming the Buzzers’ tour support. This firmed up interest from EMI, who ironically were one of the imprints that passed on the Midnight Circus demo tape. Before signing up with them though the band put out their own independent EP Bunch Of Five, with a quintet of their punchiest songs. The EP is of course feature in its entirety, dotted around the debut album and bonus tracks on disc one of this set.

The lead track and probably best-known song is Love And A Molotov Cocktail, with one of the few lyrics of the era that dealt with the schism in families that punk brought about. It’s a brilliant examination of the generation gap that doesn’t go down the well-worn “hate everybody that’s a year older than you” punk cliché, giving instead a more thoughtful viewpoint. It was subsequently reissued as the Flys’ first EMI single, but even its overall greatness couldn’t secure the band a deserved hit single. This would become a theme.

Waikiki Beach Refugees, the Flys’ debut album, appeared near the end of 1978. It had been trailed by the attractive and catchy Fun City single, which also hadn’t managed to break through into the national charts. The title track was also extracted on 7 inch at around the same time as the album emerged, sporting a little bit of Wire influence to these ears, always a good thing.

In truth this LP was a frustratingly bitty effort, with the band seemingly wanting to prove that they could do everything by changing style on almost every track. It does start well with We Don’t Mind The Rave, cruelly relegated to the b-side of Wikiki Bach Refugees when it could have been just the song to make the breakthrough the band desperately wanted. Looking For New Hearts is another addictive winner, but things do rather tail off from there on.

The problem with this album is the sheer amount of variety the Flys attempt, not the lack of it. Their pre-punk roots show too, on Monsoon Sky’s Stonsey country slide sound and the street rock approach given to Some Kind Of Girl. There’s a few examples of the kind of clipped power pop which wouldn’t be too far away from what emerged via the Mod Revival a year later, particularly on the sparky Don’t Moonlight On Me. Beverley, the third single from the LP, even tilts (sardonically?) at the kind of soft pop the likes of Smokie peddled earlier in the 70s, before going into a punky chorus.

Ultimately Waikiki Beach Refugees left people a little confused, like there was actually more than one band trying to escape from its grooves. The bonus tracks added to the album on this part of the disc do pick things up a bit. We have the songs from the first EP which didn’t make the album, all of which are punk pop nuggets of the first order and Name Dropping is an appealing mix-up of 60s pop, glam and punk. Their tribute to their number 1 fan/pal Adrian (Don’t Call Me Jimmy) has great energy and some chainsaw guitar thrills and I’ll Survive shows a willingness to embrace spacey psychedelics which the band would expand on later. The other items are single versions of LP tracks, which help to give the complete picture.

Luckily enough the Flys were only really getting started. Because second LP Flys Own was really a massive improvement, one that most people wouldn’t have thought the band had in them given the somewhat iffy nature of their previous platter. One can only conclude that the Flys had shot themselves in the foot with their first album to such an extent no-one was listening, which is a crying shame as this is an excellent record. Though like on Waikiki Beach Refugees they toy with a few different musical settings, nothing jars. For instance there’s some great early electropop in Fascinate Me and garage r&b on Night Creatures, but everything is punchy, crisp and memorable. Graham Deakin was now on the drum stool and his power and energy helped add another dimension.

Wire’s more pop moments would be a reference point for a few offerings here, but the Flys have a lyrical viewpoint and individual slant of their own. 16 Down, eventually released on a single as part of the Four From The Square EP, had exactly the kind of edgy new wave style that was going down a storm at the time and a clever “crossword clue as a love song premise”. There’s an odd watery psych intro to Through The Windscreen and Cheap Days is brilliantly put together with some great backing vocals – the voice arrangements, something you wouldn’t necessarily expect from a punk/new wave album, are great on Flys Own. Final track Frenzy Is 23 says goodbye to the album and hello to the 80s in fine style. It was a decade that the Flys wouldn’t last long into, as it turned out, but this takes nothing away from Flys Own – an excellent record.

The bonus tracks that are included here show what a great band the Flys had developed into in 1979. The non-album single We Are The Lucky Ones/Living In the Sticks is a dynamic two sider, showing a band spreading their wings in an elegant and catchy way. Yet another record of theirs that should have made an impact. Lois Lane and Today Belongs To Me were part of the Four From the Square EP and either track wouldn’t have been disgraced as a single in its own right and the jangly pop of final 7″ What Will Mother Say show that the band could have easily cut it in the new decade given half a chance. Unfortunately it wasn’t to be and the band folded soon after the single was issued.

The six previously unreleased tracks that end the selection again underline the strength in depth the band had. The biting pop/rock of Come On Stupid is an ace and Program is both slightly creepy sound and satisfying at the same time. Down Your End Of The Phone is new wave garnished with a winning chorus and a chiming pop approach is well employed on Hang On. I Say is another of the band successful psych-tinged explorations and the collection ends with a gusty second demo version of Living In the Sticks.

The Flys are a relatively rare example in 70s Punk/New Wave in that they only really came into their own after their first album. The second disc of this collection is simply glorious, zingers from practically start to finish. The first disc is a little less consistent, but does contain some great stuff like the first EP including of course the ageless, peerless Love And A Molotov Cocktail. The only thing missing here are the three Peel sessions, but there is enough here to divert even the hardcore Flys fan, a good upgrade on the Captain Oi! editions of 15 years back. There’s also a very interesting accompanying a booklet that tells the story straight from the Fly’s mouth, well Neil O’Connor’s anyway. Anyone who is an enthusiast for well-written songs played in an imaginative style or just simply good pop music with a punk edge will be in heaven here.