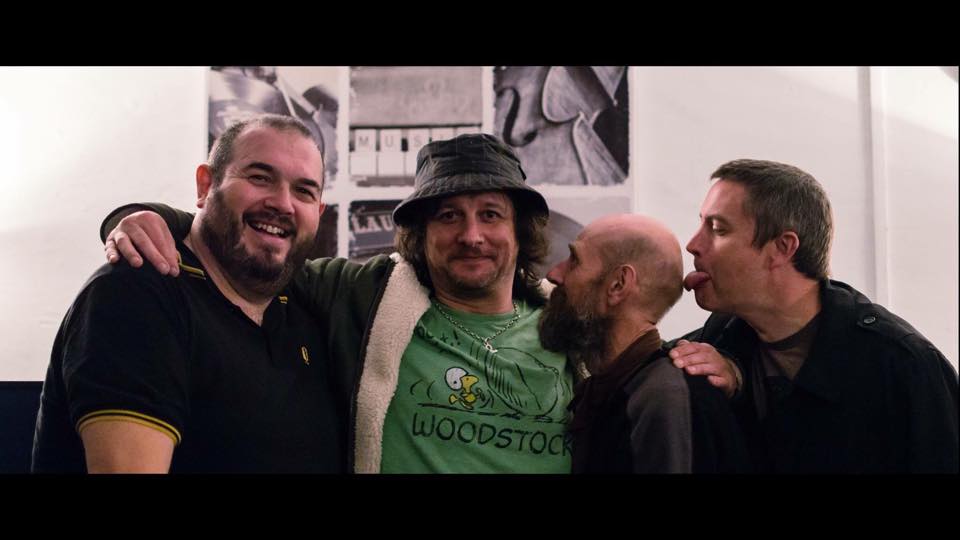 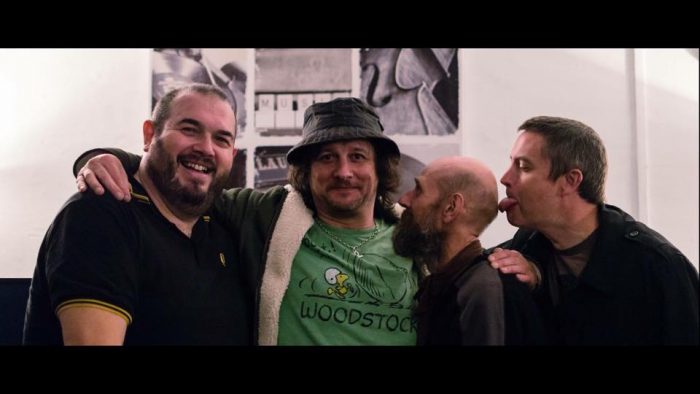 Prior to 1979, a sense of community for the average Brit was a tangible fact of everyday life. Margaret Thatcher had not yet informed us that there was “no such thing as society” and the epitome of modern technology, for most of us, was the remote control we used for switching between BBC 1, BBC 2 and ITV without leaving the sofa.

Friends were people that you actually knew in real life. You had a circle of mates, randomly gathered over time from school, work, the pub, football, dance halls and the local gig scene. You socialised with them at evenings and weekends and you were all pretty much on a par, unedited, without much mystery attached. Nobody shared photos of what they’d had for tea, but we managed. Computers, cell phones and games consoles weren’t around to stultify our senses in hyper space. The World-Wide Web had yet to spin that greatest of lies – the one about us all being members of a vast, globally linked (and entirely imagined) community. Communities were what we lived in before the ’80s squashed them out of existence.

Life in ’70s Britain was fairly grim for grown-ups but really quite good fun for adolescents. We identified ourselves as the ‘No Future’ generation with studied disaffection and no sense whatsoever of how prophetic that Pistols’ lyric would eventually prove to be. One thing It all was, though, was founded in reality, with our lives happening in real time and space. The growing dole queue, the power cuts, the strikes, political dissidence, making your own outfits from jumble sale finds, fighting, finding your voice and your tribe. From out of all this, punk exploded – my first tribe.

In 1977 you had to put effort into finding your tribe. You’d discovered the music and identified strongly. You listened to John Peel and John Walters on the radio, read the music press and fanzines and spent hours hitch hiking to gigs in far flung towns and cities, all of which took commitment and a degree of forward planning.

At a local level, Saturday afternoon record hunts were a vital weekly ritual. Opportunities for finding members of your chosen sub-culture were limited and scoping for treasure amongst the racks in independent record shops with walls plastered in gig flyers and band “wanted” ads, was where you located your tribe and their hangouts. That’s where edgy haircuts and alternative, badge festooned, outfits were to be found, all checking out the right records.

Certain post-modern pop culture pundits have tried to revise and re-package punk as a moment, rather than a movement, one whose light burned brightly, but briefly, before rapidly extinguishing itself. This version of events misses the fundamental legacy of punk for those of us who lived there and cut our political teeth in that moment. We learned the language of disobedience and activism, essential tools that we needed to see us through the 1980s and Thatcherism. Whatever that moment gave us, it evolved and stayed with us. We knew the importance of protest before it became a socially unacceptable term. Perhaps our enemy was easier to see back then. Nowadays our various nemeses are all hidden in plain sight and brainwashing works best when those subject to it are oblivious to its mechanisms.

Fade out and cut to the 21st Century and the future’s been swallowed by a parallel universe, in which reality is virtual and the non-existent dubbed real. Today’s friendships are collected and catalogued in list form. We compile names of people that we’re never actually going to meet and call them our friends. We’re socially graded, vetted and ‘liked’ by painfully mindless criteria that we’ve collectively forgotten to dismiss with derision. We congregate into self-regarding little niches, masquerading as communities, cherry picking people who appear to think the same way as us and blocking anything resembling a dissenting opinion. To disagree with someone online is to ‘offend’ them and language has become politically correctable in a society where the politically diabolical passes unchecked. This anti-social and isolating cult of narcissism is called social networking, without a hint of irony. The speed with which we have willingly been herded, sheep like, into this fictionalised version of the world is the nightmarish stuff of an Orwellian dystopia – yet here we all seem to be gathered.

Jon Sansom and Perry Flatt first met on the upstairs back seat of a bus back from town, one Saturday afternoon in 1978. They were eleven and twelve years of age and, having clocked each other’s badge collection and compared the day’s respective vinyl purchases, decided they liked the look of each other and so began a beautiful friendship.

Fast forward 13 years to 1991 and the seditious duo hook up to start a band of their own. They had very clear ideas about how they wanted to sound and the music they were going to play. From the very beginning, the Flying Alexanders have held true to their punk roots philosophy, producing hard edged, punk influenced rock ‘n’ roll, as raw and immediate now as when the band first took to the stage, some twenty six years ago. Their high octane live performances contain a selection of ska tunes, both as covers and in their own compositions, for which they have coined their own generic niche term of “Gothic Ska”, to describe their treatment of this traditional sound, which can be heard in their track ‘The Night’ on the new album. Their take on most subjects tends towards the dark, misanthropic side of the street, reflected in politically caustic lyrics that pull no punches and are delivered with mockery, jaded cynicism and different degrees of anger. They are a terrific live act and always go down a storm at festivals, both here and abroad. Four seasoned musicians, at ease with other on stage, belting out songs with all the gusto and energy that’s kept them at full throttle for the best part of three decades, with a loyal and steadfast fan base.

They’re a hard working touring band, with an impressive line up of bands they’ve played support to, including Dr Feelgood, 999, The Undertones, The Damned, Glen Matlock, Stiff Little Fingers, Penetration, The UK Subs and were twice joined onstage, at The Joiners in Southampton and The Railway Inn, Winchester, by Eddie Tudor Pole of Ten Pole Tudor for a rousing version of ‘The Swords of a Thousand Men’

Song writing is very much a band effort, with all present during the process. Jonny writes the lyrics and sings the melody, to which Perry adds his guitar riffs. Then bassist Colin Ames and drummer Pete Hutton (band members for 12 and 15 years respectively) bring their own input to the creative mix. “The process happens very quickly and democratically”, explains Jon. “It’s not unheard of for a song to be written in 5 – 10 minutes, without a lot getting changed afterwards”, he adds. “If we’ve got something we like, we don’t jinx it by over-thinking it, or tweaking it to death. We’ve all been playing together long enough now to know what works and what doesn’t”. This attitude reflects their shared philosophy and consistent working style throughout the band’s lifetime.

The band’s fourth cd release, simply entitled ‘The Flying Alexanders’. is available from April 26th, downloadable from Spotify, for sale at gigs and the other usual outlets, including The Bitterne Park Hotel in Southampton. The cd marks a departure from previous work, being their first studio produced album, under the guidance of a very talented young producer called Dan Hattersley, fresh from Abbey Road Studios.

It bears all the hallmarks of their punchy signature style, still redolent of the original sound that inspired them, complete with Jonny’s blues shouter lungs delivering vocals that sound straight out of a (good) Kilburn pub band, circa 1978 (not bad for a Southampton lad). It’s an overall less kerr-angy sound than previously, with a professional polish that I personally really enjoyed, affording as it does an opportunity to appreciate both the instrumental arrangements and harmonies with a lot more clarity than I’m used to as an audience member at their gigs. The lyrics reflect a slight shift from the purely political protestation of yesteryear, to a more personal perspective from Jon, whose observations now focus on the politics of life as he experiences it. ‘Brave New World’ cocks an acerbic sneer at the “car crash karaoke” of the modern music industry, as packaged in meaningless, anodyne portions by the cult of Simon Cowell et al. He throws down the gauntlet to the next generation, appealing for change with the line “Ain’t you young punks just sick of this junk?” My favourite track, “Crocodile”, is partly chosen for the fact that the riff is directly lifted from The New York Dolls’ “‘Cause I Sez So” (2009) and re-arranged in reverse order by Perry, which I enjoyed putting to the test by simultaneously running both tracks on top of each other (it worked!). I also love the song as a disdainful taunt to the Facebook generation and the cult of banality that can draw tears over an unknown celebrity’s latest psycho drama and cold indifference to the plight of those far closer to home. Returning to my own starting point, above, which admonishes those of us old enough to know better, we’re all being duped into drowning our own humanity under the ceaseless tidal wave of junk washing over us on a daily basis, that amount to little more than crocodile tears.

They are at pains to point out that the new album is “available from” April 26th, as opposed to being “launched” on that day. They have a strict embargo on launch dates and showcases, in the belief that such events are the kiss of death to bands who, apparently, “always split up after launch dates and showcase events. So that’s cleared that up, then.

The last word goes to Jonny, who says “We’ve seen a lot of scenes come and go, including grunge and BritPop. We’ve stayed the same. We’ve been in and out of style and the only things we’ve changed is our haircuts”.

13th May, Southampton Live at The Bandstand, Palmerston Park, from 2.00pm

All words by Sue Blackwood whose author profile is here.

Band portrait, a picture which paints 1000 words,  by Damian Cook.

Video clips taken from You-Tube to give a visual history of the band over the years – songs are not on the new album. Thanks to the original uploaders.