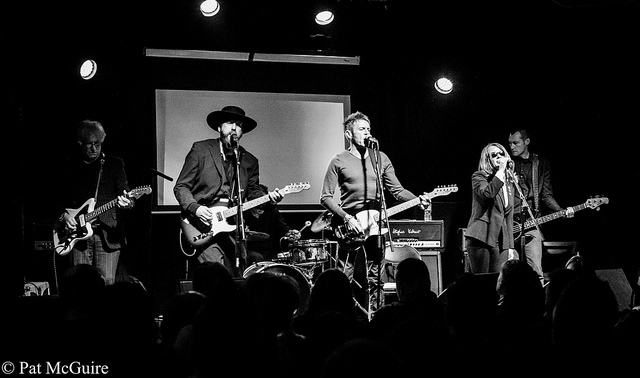 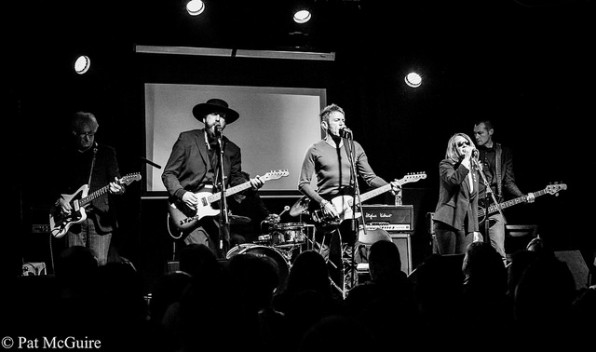 Photo above: Full band performing the finale of “Bring on the Dancing Horses”

The Filthy Tongues with Paul Hullah | Lola in Slacks

Louder Than War’s Gus Ironside reports back from a unique and stunning performance by Japan-based poet and writer Paul Hullah, with sterling support from Martin Metcalfe’s regular band and rising stars Lola in Slacks.

Was I really at this gig, or did I just dream it? I’m still trying to absorb and comprehend one of the most astonishing concerts I’ve ever witnessed.

Martin Metcalfe- formerly the lynchpin of Goodbye Mr McKenzie and Angelfish- recently released ‘SCENES’, a book of Metcalfe’s artwork and accompanying vinyl record/CD documenting the musical and artistic subcultures in Edinburgh from 1980-90. Metcalfe’s friend and former band mate, the poet and writer Paul Hullah, provides poetic commentaries and collaborated on the songs. With Metcalfe’s band The Filthy Tongues providing the musical accompaniment, Hullah took the spotlight for most of the evening.

But before this, the fans-only audience at this ‘secret’ gig in a tiny venue under Glasgow’s Central Station were treated to a heart-stopping performance by the support band. Louder Than War recently named Lola in Slacks as one of its top tips for 2015 and the band fully delivered on this promise, in dramatic fashion.

Stripped back to a core four-piece of Lou Reid on vocals, Brian McFie on guitar, Davy Irvin on bass and Lesley McLaren on the traps, the Glasgow band opened proceedings with the swooningly beautiful ‘Bisous du Mistral’. Eyes masked behind her trademark sunglasses, Reid captivated the seated audience with a vocal performance that combined the commanding presence of Edith Piaf with the subtle nuances of prime Marianne Faithfull. Also sporting shades, McFie played with steely restraint, evoking the masterful dynamics of Al Green’s trusty lieutenant, Teenie Hodges.

The band then launched into the glorious romantic adventurism of ‘Trocchi’s Canal’, the rhythm section of Irvin and McLaren kicking in with passion and precision, driving the enthralling swing which underpins the band’s songs. By this point it was clear that Lola in Slacks are no ordinary band. The wearily familiar pantheon of iconic male vocalists has been rendered impotent by too many Mojo front covers, so it is fitting that a visionary female singer-songwriter should be carving out a new iconography. 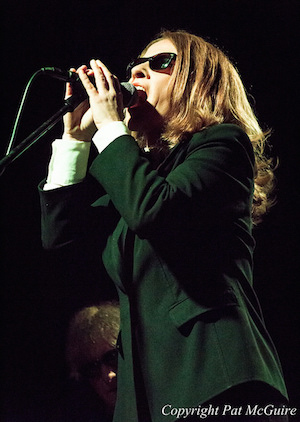 ‘Luna Moth’ took the set further into dark, mysterious nights of the soul, climaxing with a filthy guitar spasm and setting up the stunningly dramatic ‘Tramlines’. Time-veiled memories glimmered through the Chandler-esque endless night of this seductively compelling ballad, which could have nestled seamlessly on side 2 of Iggy’s 1977 masterpiece, ‘The Idiot’. The band closed the set with the decadent Weimar Kabarett strut of ‘Nostalgessant’, recalling the unclassifiable brilliance of early Roxy Music.

Lola in Slacks have a debut single scheduled for a June release, which will surely propel this startlingly brilliant and original group to wider recognition. Intimate and imperious in equal measure, this is a band to fall hopelessly in love with.

By this stage in proceedings, Audio had been transformed into an analogue of St Mark’s Church in-the-Bowery, in the mid-70s- the intense melting pot where poetry, art and rock ‘n’ roll all combined to create a new form of existentially imperative music. 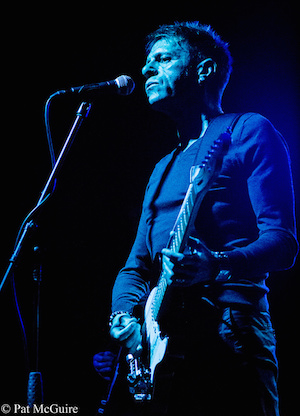 Lola in Slacks had perfectly primed the audience for a jaw-dropping performance by The Filthy Tongues and Paul Hullah. Opening with a compelling video montage of Metcalfe’s art exhibition, the intensity was suddenly racked up several notches when Paul Hullah took to the stage and delivered a powerful reading of his poem ‘Homing’. Hullah’s potent physicality was mesmerising as The Filthy Tongues provided a shimmering musical backdrop to a series of inspired songs, reaching a zenith on the dizzyingly gorgeous ‘I’m On Your Side, Ophelia’, featuring the striking image “tears like running diamonds in your angry slate-grey eyes.”

Digging deep into his Goodbye Mr McKenzie back catalogue, Metcalfe performed the salty ‘Amsterdam’ with appropriate relish, his wide black fedora and preacher-man suit evoking Robert Mitchum’s character from ‘The Night of the Hunter’, recast in a fatalistic Gabriel Garcia Marquez novel.

A small huddle of hecklers was the sole negative in a night of dazzling peaks; at one point, Paul Hullah’s laser-eyed stare tracked in their direction and for a second I wondered if the poet was about to launch a Jean-Jacques Brunel-style assault on the braying boors. Fortunately for them, Hullah continued to channel his energy and focus into the performance and the malcontents were roundly ignored by all.

For the finale, Hullah and the Filthy Tongues were joined on stage by Lola in Slacks’s singer and guitarist for a transcendent cover of Echo and the Bunnymen’s ‘Bring on the Dancing Horses’. Metcalfe, Hullah and Reid took a verse apiece while McFie’s Jazzmaster added subtle shading to the accompaniment.

It was a beautiful, strangely moving end to a night which had left the audience enraptured. Metcalfe and Hullah will shortly be bringing this show to the writer’s adopted home of Japan. Perhaps the ‘plane fare may prove an obstacle to UK fans, but if you weren’t there, very limited edition copies of ‘SCENES’ are still available and are an essential purchase.

Hullah, Metcalfe and The Filthy Tongues have raised the bar for what is possible when rock ‘n’ roll embraces and is inspired by art and poetry, encapsulated by Patti Smith’s apposite lyric, “Dip into the sea, the sea of possibilities”.

Life in all its fraught, vexing but ultimately beautiful glory was reflected in this magnificent performance. Thank goodness for the dreamers, poets and outsiders; their vision blows the dust off the reality of our existence and compels us to slip our shackles.

“I want this adventure that is the context of my life to go on without end.” Simone de Beauvoir.

Lola in Slacks’s single will be released on Stereogram Recordings on June 22nd.

All live photos by Pat McGuire,  who is on Facebook.

All words by Gus Ironside, whose Louder Than War archive is here (https://louderthanwar.com/author/gus-ironside/)