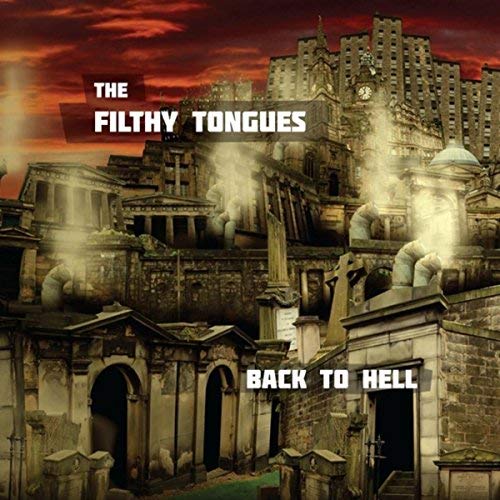 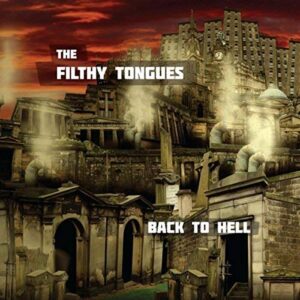 The Filthy Tongues: Back to Hell (Neon Tetra)

Back to Hell from the now Isa-less Filthy Tongues consolidates the welcome fact that the band have hit a vein of tremendous creativity that is set to span over a trilogy of albums. This menacingly glorious follow up to Jacob’s Ladder is packed full of richly textured musicianship sound-tracking passionate tales of desolation and pain but with a glimmer of hope to come.

The core of the band Martin Metcalfe, Fin Wilson and Derek Kelly have been together in various guises since the early days of Goodbye Mr Mackenzie in the 80’s and time has been good to them in terms of muse and inspiration. The Filthy Tongues see Metcalfe back on lead vocal duties and as a result the band is a different beast to the one which Stacey Chavis fronted. Take the darker elements of Isa and The Filthy Tongues, add Metcalfe’s deep characterful baritone and you have a band that easily matches up to anything the antipodeans can conjure up with Nick Cave and the Bad Seeds.

2016’s Jacobs Ladder was a darkly magnificent triumph, therefore a difficult album to follow. If anything the band have exceeded expectations with the follow up Back to Hell. The darkness on the debut is replicated here, this middle part of the triumvirate sees the characters plunging downwards towards the abyss again. The end of the album signposts potential optimism for the final part of the series.

The band who originate from the Bathgate area have used a lot of imagery of Auld Reekie both lyrically and visually for the two albums to date. Jacob’s Ladder having a double meaning in both referencing the landmark carved into Calton Hill (also the subject of a song by one of Metcalfe and co’s previous incarnations – Goodbye Mr MacKenzie) in Edinburgh whilst also a metaphor for the hope of salvation and ascension to Heaven which is the theme of the first album, while dark and brooding throughout there is an element of hope in the music and lyrics.

The blackness of Jacob’s Ladder continues in the music & lyrics of Back to Hell, as the album title and song themes suggest the hope of redemption has taken a u-turn and sees things heading back towards hades. The album musically and lyrically tells a story of a rocky journey the antagonist is making through life. But is he the antagonist, is he really the bad guy?

There is a signature sound that runs through all the bands from Goodbye Mr MacKenzie through to The Filthy Tongues that sets them apart from your run of the mill bands and gives them an element of uniqueness. Perhaps it is Metcalfe’s distinctive baritone, or the nucleus of Metcalfe/Kelly/Wilson’s inimitable playing, but whatever it is, the deep velvety textured sound is here in bucketloads and the album is undeniably the Filthy Tongues. This includes some ever-present influences that come to the fore. Bowie, Reed and Iggy Pop being ever-present in Metcalfe’s history.

Come Home opens the album and sets the scene with its menacing intro melding into slow-bluesy piano with the opening couplet of “My name is Alexander, I like what I see, you think I’ve gone to the devil, but don’t you worry ‘bout me”. The music builds with rhythmic drumming and squally guitar to a compelling climax. The writing is on the wall, he is heading back to hell.

Ominous strings are used to great effect too on this record. The Ghost of Rab McVie starts with a slow shadowy ceilidh-like feel, with the fiddle omnipresent while the multifarious layered instrumentation sound-tracking the shrewd lyric lamenting the death of Rab, within a backdrop of an ever-changing Edinburgh.

Strings also work well on the album’s title track Back to Hell in particular, with the intro being reminiscent of the Velvet Underground and The Black Angel’s Death Song. The first line in title track cements things “I fell from grace” the antagonist mourns, he isn’t going to be ascending Jacob’s Ladder any time soon, he is “going back to hell”

Similar to the previous album, the shades of Nick Cave are present (Mother’s Got a Knife & Carlos the Jackal in particular) not only in the music but in bleakness of the subject matter of the songs. “Mothers got a knife, fathers lying on the floor, the dog is in the whorehouse. Licking up the bathroom floor…”

Metcalfe is an artist in the literal sense, but the lyrics of the Filthy Tongues also paint vivid pictures, often of diabolical scenes, but the intense imagery is all there in the words. Close your eyes and you are part of it. You can see the imagery as you listen. If they ever make an offshoot of Peaky Blinders based on gangs in Scotland, this music could easily soundtrack the heinous activities as Nick Cave/PJ Harvey and the like do for the Birmingham based series.

Leper Town could have been a Goodbye Mr MacKenzie song and confirms to me that unique sound these three talented musicians create across the bands. The song is more upbeat and perhaps signals that all is not lost in the story of the albums main player. “The sun comes up over Leper Town”

Penultimate track “Who Are You” starts in a thundery rain storm and sees our storyteller questioning those who judge him. Is he really the bad guy?

Hope springs eternal though and love prevails. There are more signs of redemption at the end of the album. The atmospheric beauty of the last song on the album “Take It” is tinged with pathos abetted by the strings, piano and brushed drums. But there are also signs of hope here in the music & lyrics and in the metaphors he uses for his love.

“This is my love take it, it’s all I’ve got.” A hopeful end to the album? Maybe, just maybe, he’s not heading for hell after all.

Listening to this album is an emotionally engaging and exhilarating experience. It ensnares you from those first words “My name is Alexander…” seducing you with the lyrical imagery and accomplished musicianship. We are just over halfway through the year and I am already convinced this striking album will be in my end of year listings. I cannot wait for the third and final part of the trilogy.

You can find then online here and on bandcamp