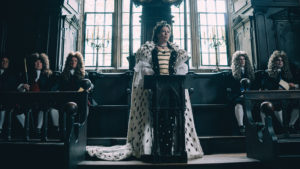 Both Lobster (2015) and The Killing of a Sacred Deer (2017) were two of the most anticipated and discussed films in auteur-led cinema in recent years.  Both directed by Yorgos Lanthimos to great acclaim, boasting impressive casts for particularly off-beat subject matter that remains hard to define, it was always going to be intriguing to see what Lanthimos would do next.  A formidable frontline cast of Olivia Colman, Emma Stone and Rachel Weisz continues the trend from previous movies, but an English period drama, focusing on the reign of the beleaguered Queen Anne (Colman) in the early days of the eighteenth century surely presents a departure from the twisted modernity that has become the hallmark of style and content in the career of Lanthimos to date?

As the film begins to develop it is clear that this is no chocolate box merry England; mercifully, this is not Sunday evening TV.  We are quickly immersed in Lanthimos‘ vision as a treatment of the subject that is immediate, earthy and set with a tone that is worthy of the conviction of its key actors.  The music, with its often repetitive and sparse refrains, echoes at its most minimalistic moments, the solemn murmurings that ratcheted the tension to almost unbearable extremes in The Killing of a Sacred Deer.  Consider those elements alongside an increasing use of ‘two shots’ integral to the plot as key characters proceed through the corridors and corridors of Kensington Palace, an interminable Scooby-Doo haunted house of panelling, candles, leaded windows and interchangeable, motionless sentries (often being screamed at)… and we are in another tradition, arguably more rarefied and transcendent in artistic terms, no less venerable but much more acerbic and interesting to those of us who have no interest in matters of monarchy, nobility and the pseudo tragedy of the British elite.  We are in the kingdom of Peter Greenaway; we are creating new expansive clauses for insertion into The Draughtsman’s Contract (1982), a film set just a few decades earlier.  I never thought that the films of Yorgos Lanthimos would offer cinematic alms… but as one who feels distinctly nauseous at the prospect of so much English period drama and its colonial broad brushstrokes, my stomach was quickly eased.

Returning to The Draughtsman’s Contract, a difficult yet mesmerising film to watch, it often feels as though Greenaway deliberately frustrates his audience… something which could also be said of Lanthimos in the past.  Yet here, in The Favourite, the whole assemblage has tightened up: there is a unity of plot, pace, character and drama that retains those prize qualities of enigma, intrigue and a defiance of offering the easy way out in terms of narrative that still means that we, the audience, are asked to compromise – in some cases reconsider – our expectations of how a story can be told.  Throughout The Favourite, wigs are donned and removed, corsets are fastened and unfastened, positions and roles are accepted, rejected and left behind from one frame to the next.  This is a film with ruffled frippery of sleeves and slap all over its face.  “What do you look like?” asks Lady Sarah (Weisz).  “Badger…” the monarch (Coleman) dolefully replies, mouth turned down like a told-off child.  We are laughing, we are horrified, we are flinching from the screams, from the chip, chip, chip of the oak veneer, the smashing of expensive but hollow pottery, the muddying of finery and the ultimate disfigurement of the faces behind the late-Stuart powder and paint.  Here, identity itself becomes increasingly fluid as does sexual orientation: suddenly as the masks fall, multiple and prolonged existential crises are exposed by the unforgiving light.

In his previous films, Lanthimos wraps strands of narrative over and over and over until the underlying themes and semblance of ‘takeaway’ is obfuscated, barely jutting out from the cinematic sands, glittering and twinkling beneath stars such as Farrell, Kidman and most memorably, Barry Keoghan.  The Favourite is prepared and presented at the outset like one of those legendary medieval dishes where the centrepiece animal is stuffed with another and another successively like a meaty Russian doll, and gradually, without losing any of its complexity and flavour – in-fact, while enhancing both – the layers are stripped back and some uncomfortable yet apposite truths are revealed.

The Favourite also succeeds against the conventional tradition of the period drama if we consider the way we might see the UK today through its prism: power is the central theme.  From the attempt to regain it that brings Abigail (Stone) to the court, the desire to increase it and affect political change that fuels Lady Sarah, through sexual exploitation amongst other means, and the desire on behalf of Queen Anne to maintain it, to hold on to the rapidly shredding royal prerogative amidst the battling parliamentarians, to hold on to her rapidly shredding consciousness and grasp at the disappearing ermine rags of her mental fortitude. Everything appears to be changing yet nothing seems to change. The early moments of capitalism. Identities and roles are still being forged. Kings and queens are rapidly becoming yesterday’s political executive. Power is writ large in every overtly symbolic act in the palace yet all are riven with impotence.  Before the eyes of the servants, the soldiers and the royal court itself, all is becoming futile – the world is changing beyond their control.  We live in just those times today: politics trapped in inertia, an impasse, an embargo on purpose and progress. Now we are presided over by corpulent, impotent organs of State at what is perhaps the end of capitalism. We are at the start of a conversation for which we have no language nor negotiating chops, just a few ideas of how to build the ship while we try to sail it.  We need to update our system but the hardware is obsolete.

With The Favourite, Lanthimos has crafted a film of urgent comment on the human condition at the fulcrum of power, the fault-line of where the personal and political crack.  This is no historical escapist retreat, this is rather a plunge unto the breach between the past, today and tomorrow.