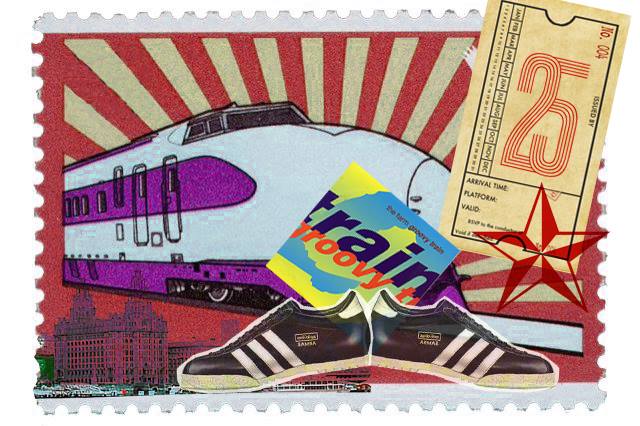 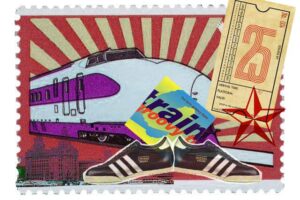 We started recording Groovy Train in the summer of 1990 shortly after our critically acclaimed cover of Stepping Stone. It wasn’t our first choice as the follow up single to The Monkees cover but in hindsight it should’ve been. We had actually gone into the Liquidator Studios on Caledonian Rd with our producers Suggs of Madness and DJ Terry Farley to record a song called ‘Higher and Higher’ which did end up on Spartacus but we were having a few technical problems with that song i.e. getting the rhythm section sounding right so we switched our attention to another new song called Groovy Train.

We had recorded a Peel session in May 1990 that included Groovy Train but it was quite different to how it ended up. The rhythm track was the same but Keith’s distinctive guitar was not as prominent in the track. You can hear the Peel session version on the Complete Recording sessions here

When Terry Farley heard the track he suggested that we used Keith’s hypnotic guitar hook more prominently and maybe even start the song with it. Suggs agreed and also decided that our middle eight was taken out completely. The Peel version sounded a lot more psychedelic and the bass line was different. Gary Wilkinson who was from Liverpool and had worked on The Farm’s very first recording in Pink Studios in Liverpool was the engineer for the session and recorded some great guitar tracks. The new version was mixed by Mark Saunders in the Konk Studios in Hornsey/Crouch End which was a legendary studios owned by The Kinks which has produced many hit records
https://www.konkstudios.com/#!about/c10fk – when we heard the final mix we all loved it but had no idea how popular it would be.

Our pluggers/press played the track to several DJs/journalists who all thought the song was going to be massive including the promoter Simon Moran of SJM. Our plugger told us that the features editor of the NME James Brown (the Kingmaker) had heard the track and thought we could get a front cover but might need a ‘Liverpool’ personality on the photo shoot to convince the rest of the staff.

We decided to invite Bill Dean (the distinctive perennial grump Harry Cross from Brookside) to appear in the video at Southport fun fair. In the meantime we had travelled to Ibiza on the insistence of our manager Kevin Sampson. He had a cunning plan that the group reluctantly agreed to. We were to travel to Ibiza to play at the Ku Club and perform a short setwhich included Groovy Train but we weren’t going to be paid. Kevin needed all his powers of persuasion to convince the group that this was a good idea and we should treat it as a promotional holiday. On the grapevine we had heard that The Happy Mondays and Flowered Up had knocked it back because of the arrangements and lack of fees but 808 State had agreed to go so Kevin was able to convince everyone we would have a great time and get some good promo footage for a video and some of it including our gig in the Ku Club and some boat scenes and belly flops made it onto the Groovy Train video.

We had been playing quite a few gigs/club nights in London for several months for promoters like Charlie Chester who ran the Flying nights and we had been going down a storm. Ever since our Face front cover we had become the one of the most fashionable groups in the Boys Own/Flying Balearic crowd. Kevin had been working for the Channel Four Youth commissioning editor and had convinced him to consider screening a documentary on the Ibiza club scene that was still relatively underground at that time. Kevin had a film company in London called Kinesis who were lined up to make the documentary they just needed a financial backer. Kevin with his cunning plan approached the record company we had helped set up called Produce Records. If they financed the project it would be a great boost to the prospect of getting Groovy Train into the charts that summer. Produce Records agreed to fund ‘A Short Film About Chilling’ which is still regarded as a groundbreaking documentaries and one of the most authentic about Ibiza.

A Short Film About Chilling

Kevin had ‘forgotten’ to tell Channel Four that he was also working as the manager of The Farm so it was a McClarenesque stroke of genius. The documentary was actually broadcast on the week of release and after a good mid week chart position we crept into the charts at No 40 (when the top 40 meant something.) We all gathered in our Wood St office in Liverpool to hear the chart countdown and when we heard the news it was a scene of unbridled joy. We decided to go to Larks In The Park in Sefton Park and spent the evening in and around Lark Lane celebrating. The next week our chart position was No 28, which meant that we were going to make our debut on Top Of The Pops. We were on the crest of a wave and Top Of The Pops was broadcast on the night we were booked to play the legendary Town and Country Club. I don’t think we even saw our debut live on the BBC as we were on our way to the venue. When we arrived there it was chaos with queues around the block. The gig was sold out but word soon got back to us via our management that the touts were charging ‘top dollar’ for tickets. We all cheered – we had arrived – but we still tried to get as many in through the side entrance as our mentors The Clash had taught us!

The atmosphere in the venue was incredible and it seemed the hippest people in London were there rubbing shoulders with football types who had joined the party. Groovy Train was greeted with near hysteria as sweat dripped from the venue ceiling. The track kept on going up and up in the charts and after the Top Of The Pops appearance it went up to No 11 then No 9 which meant another Top Of The Pops appearance. It peaked at No 6 but stayed in the charts for nearly three months. The previous year we were struggling to get even a few column inches in the music press and now everyone wanted to know our thoughts on everything.

The team at Produce Records who had had absolutely no experience in the music industry and had only reluctantly started the label to get us signed was running the whole operation. Orders were flooding in and every indie label in the world seemed to want to license the track. One label in particular were keen and that was Sire Records fronted by the enigmatic legendary Seymour Stein who had signed Talking Heads, The Ramones and Madonna. Everywhere we played live he seemed to turn up nodding his head before falling into a trance like state. Eventually we signed a deal with Sire Records and Groovy Train was released in the States. It had already been a hit with their ‘Modern Rock’ stations on import but Sire decide they were going to give it a big push with a promotional tour in the summer of 1991 and a new video shot in New York City on a London bus. Sire didn’t like our UK video as they said no one would have a clue why an old fella (Bill Dean/Harry Cross) was singing into a stick of Southport rock. We did the video around the streets of Manhattan and what a time we had https://www.youtube.com/watch?v=TsSPQzPyAk4.

Everywhere we went in the States we heard the track on the radio and stations were even doing their own edits. It got to No 4 in the Hot Club dance tracks and No 15 in the Modern Rock charts. It eventually got into the Billboard Hot 100 and kept on going up and up week after a week. Chart positions over there are based on adds at radio stations, airplay and sales. It seemed to be heavy rotation on MTV and eventually peaked at 41 – it was in the top 100 for 16 weeks from Sept 1991 to November 1991 that coincided with our tour of the States with Big Audio Dynamite.
https://www.billboard.com/artist/404728/farm/chart?f=379

I wrote the lyrics for Groovy Train after meeting a girl I knew in the State nightclub in Liverpool – she used to be fairly political/socially conscious and when I was talking to her she was telling me that she had rejected all that ‘political stuff’ due to ‘finding herself’ after taking an ecstasy tablet and becoming obsessed with house music it had changed her life and she said to me without a hint of irony ‘I’m on the Groovy Train now.’ I immediately thought to myself that would make a great song title so over the next few weeks I set about writing a song with that as the chorus. We didn’t know at the time but the Happy Mondays were planning to release a song called Groovy Afro but when they heard we releasing a song called ‘Groovy Train’ they changed their title to Kinky Afro. I’m not sure if they had beaten us to the release date we would have changed our song title to Kinky Train (well Keith might have) Anyway I think its fair to say without a shadow of a doubt Groovy Train captured the mood of the summer of 1990 or the summer of 1991 if you lived in the USA. It was the start of a journey that is still continuing to this day – we are still on that ‘train’ playing live and the group remain good friends which is an achievement in itself in the topsy turvy world of the music business.

Peter will be doing a live Q&A at 7pm on Thursday 27th August on The Farm’s facebook page https://www.facebook.com/thefarmlive