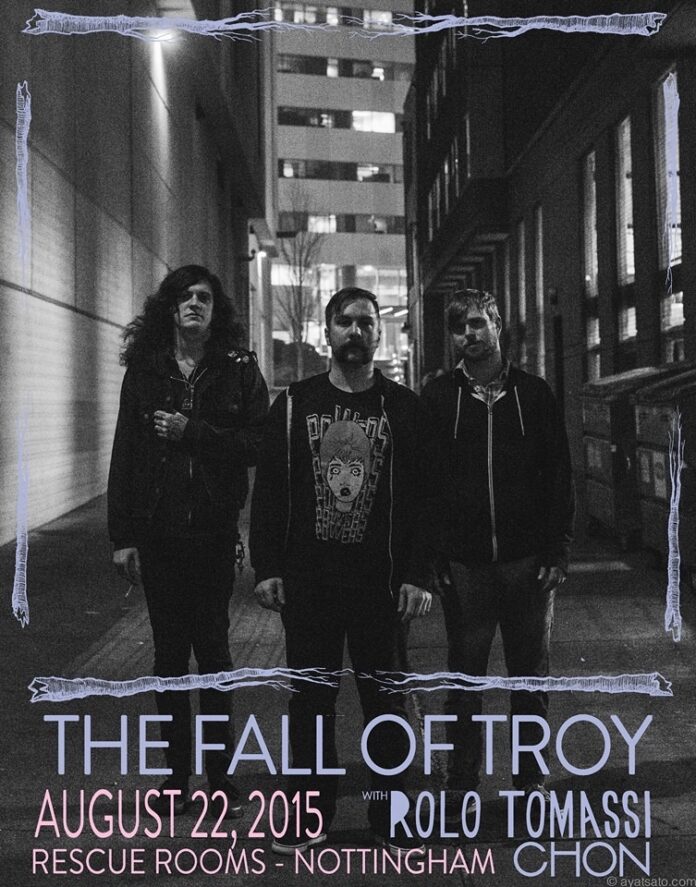 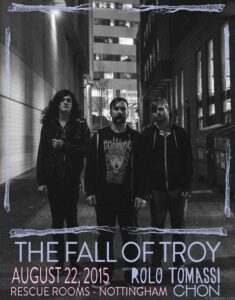 U.S. post-hardcore band, The Fall Of Troy, have been out on tour in the UK with fellow Americans CHON, and Sheffield’s own Rolo Tomassi. Louder Than War’s Stephen Murphy went along to their recent Nottingham gig for an evening of music – and a refreshing free sauna.

It’s hot, damn hot. With the outside temperature in the balmy mid twenty degrees centigrade, the un-air conditioned interior of the Rescue Rooms is a fetid, dripping sweatbox. Before a note is even played, there are near-visible fumes rising from the sea of perspiring, Lynx encrusted youth – creating the perfect, pheromone rich backdrop, to what promises to be an exuberant evening of math core / post-hardcore / jazz core / prog-rock.

First up to try and make the parboiled masses even more hot and bothered are San Diego’s CHON.

CHON’s take on the unpredictable nature of jazzy prog-rock is both head scratchingly odd and gloriously entertaining. Squiggly time signatures and wailing, gnashing guitars combine to cause a sense of disorientation akin to being drunk on a tightrope. Thankfully though, there’s enough melody amongst the prog mayhem to demonstrate that CHON are talented chaps, and not just slaves to fretboard wankery and syncopated drum patterns .

Thirty minutes isn’t really enough time to get a measure of any band, let alone as one as complex as CHON, but if nothing else, I’m certain that many of those assembled in the Rescue Rooms will be checking out the band’s debut LP, Grow, based on the strength of tonight’s performance. Intriguing, thought provoking stuff.

Tonight marks the fifth time I’ve seen Rolo Tomassi live, and I have to say, I’m filled with conflicting emotions at the prospect of seeing them as a support act after so many memorable headlining gigs.

Most, if not all bands ride the escalator of ascending / descending fortune during their careers. Some more than others deserve the downward journey to obscurity – either because of increasingly terrible records, or because they’ve become monstrous, drug fuelled, egocentric twatballbags.

Rolo Tomassi are different though. Not only are they one of the best live acts in the UK, but over the course of four studio albums, they’ve plotted an increasingly intricate course to the dark heart of the universe, and as such, deserve the record buying public’s support, love and money. They shouldn’t be playing second fiddle to anyone, unless it’s supporting a reformed Smiths, who’ve got a newly resurrected Elvis on tambourine and triangle duties.

Despite their second billing status tonight, Rolo Tomassi come out fighting. With songs that simultaneously cradle you lovingly, whilst smashing your bastard face in, Rolo Tomassi are the very definition of an iron fist in a velvet glove.

With a set list of thunderous intensity, it’s perhaps Stage Knives from this year’s Grievances LP, that best showcases the band. One minute, front woman Eva Spence sounds like Bjork fronting a mellow alt-jazz band. The next, she’s screaming like Beelzebub’s rather cross sister – whilst the rest of the band do their best to melt the audience’s brains with the sheer sonic thuggery of it all. Free-form-jazz-mathcore with a hint of added grrrrarghhhhhh! isn’t for everyone, but Christ, it bloody well should be!

Thankfully, normal service will be resumed in November, when the band head off on a headline UK tour. Go along and support them, because Rolo Tomassi are one the few bands who unequivocally deserve a step on the up and up escalator .

Having been around since 2002, Washington State’s The Fall Of Troy are wonky post-hardcore warriors who’ve survived years of being on the road, band breakups (the group took a leave of absence between 2010 and 2013) and the risk of catching contagious diseases from spitting (more of that later).

Perhaps the most immediately striking thing about the group, is that whilst they they have some powerfully visceral songs, their front man and guitarist, Thomas Erak, looks strangely like Status Quo’s Francis Rossi with a Slash wig on. Every time Erak spreads his denim-clad legs, drops his head, and starts waggling his mane about, I fully expect the opening chords of Down Down to erupt from the Rescue Rooms speakers. Sadly, this never happens, but what does come out is arguably better than Quo’s finest. Songs like Semi Fiction and a brand new track (Sublematic?) are howlingly loud, but surprisingly melodic. Erak is also one of the most talented bastards I’ve ever seen on a guitar, with some axe fingering that would surely make Eddie Van Halen grumpy with jealousy.

Whilst the Rescue Rooms crowd are initially resistant to Erak’s plea of ‘livening up a bit’, a spot of inter-personnel striptease, some jaggedly lovely post-punk riffage (interspersed with some occasional hillbilly rock ‘n’roll), and the sheer volume of the band, soon has mosh pits opening up like fault lines in an earthquake hot zone. Christ! Even two semi conscious roadies rouse from their slumber in order to run into the audience for a spot of slam dancing, such is the power of TFOT’s music…

In fact, in an evening of commendable musical skill, the only annoying thing about The Fall Of Troy is their mucky habit of spitting like spoilt premiership footballers. Whilst flobbing in the air and catching it in your mouth, or hocking up a lump of lung butter as you leave the stage is a commendable skill to have, grown men in their thirties should probably know better. Dirty, dirty, talented, dirty buggers.

After a night of thrilling, exuberant music and a pore opening sauna powered by the sweat of four hundred strangers, I go home damp, happy and slightly deafened. It’s always great to see a band you love, but to see two more who are going to feature in your listening habits for the months and years to come, is just the icing on the what-ever-core-you-wish-to-call-it cake.