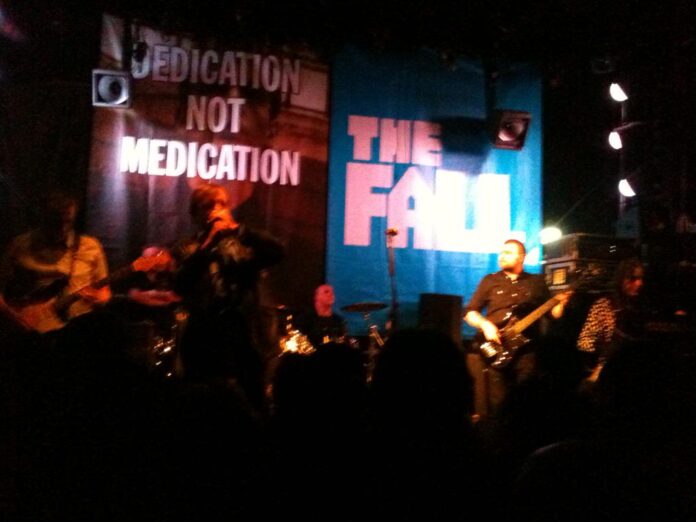 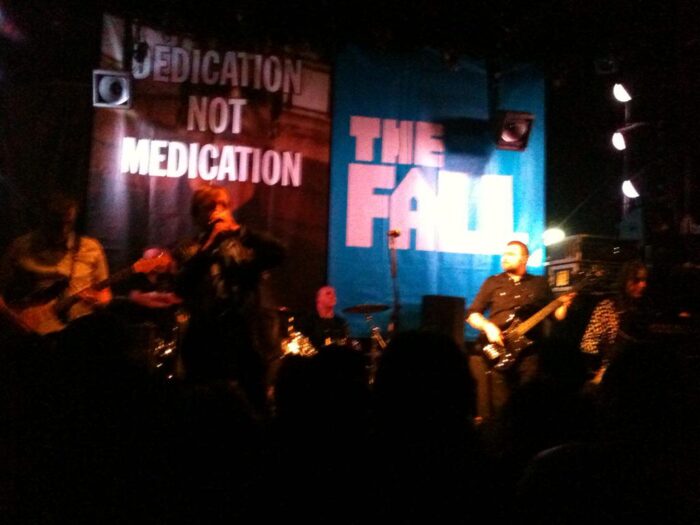 The Fall suit these kind of places.

The damp concrete elegance of Manchester Cathedral is one of the few parts of the city centre where time seems to stand still and its sense of ghost like history and damp neo gothic cantilevers somehow match the Fall’s restless industry that sees them play a great set culled from their new album peppered with one surprise.

At the pulpit is Mark Smith shuffling about delivering scathing sermons of shard and snippet poetry with a gimlet eye focus that has become part of their current Fall thing. The Fall have existed for a biblical timeline and their relentless productivity has seen them through 31 albums whilst somehow remaining fresh.

Maybe its the surroundings or maybe its the current mood in the camp or maybe its the ‘dedication not medication’ backdrop but there is actually a strange focus about the whole of the band tonight. A strange dedication to their craft that sees the band dealing out adjectives that are not often attached to their dogged waggon like tight, determined, machine like and powerful and all in a good way.

Not that the Fall have been a mess. Sure they have had their moments mainly caused by the singer determined to prevent the band becoming just another group and that is part of the fascination with the anti group. The teetering on chaos and havoc is part of their thing. That treading the fine line between chaos and brilliance. But all this has been banished tonight as the Fall sound like a cohesive machine as they deal out their new album with a thrilling power with even Smith playing his part.

Album number 31, Sub Lingual Text, may have the occasional doubter but to these ears its quintessential Fall. This time with a garage band shuffle and a psychedelic bent with added krautrock bolted onto the chassis we know so well. When the band kick in with Systematic Abuse they make their own statement that they are very much the current Fall and they may be the occupiers of an ancient institution but this is their own individual take on things.

The guitar lines are spectral and the rhythm section is grindingly and powerfully effective and the keyboards make those brilliant electronic envelopes that are such a key part of the modern Fall. Smith wanders around hardly messing with the amps and drawls over the top with his charismatic voice cutting across the seething noise like another instrument. Sometimes he is singing from behind the bass amp and only his hand with fingers outstretched appears over the top as that familiar drawl echoes around the room.

He actually spends a lot of time at the front stage stretching into odd body shapes like a cat – arms outstretched and words and sound pouring out powerfully across the seething backbeat.

It’s not easy to hear what he’s saying but this matters little as you can feel it. The disdain, the dark humour and the sense of dark wonderment are all on display and the packed crowd of burly believers creates a mosh pit as the band kick into their last near brush with pop charts with the hypnotic and timely post Sepp Blatter Sparta  in the hallowed holy arena whilst Smith stares out over their heads and into the bowels of gods own space.

Enthralling as ever. The Fall, like the cathedral, are timeless.