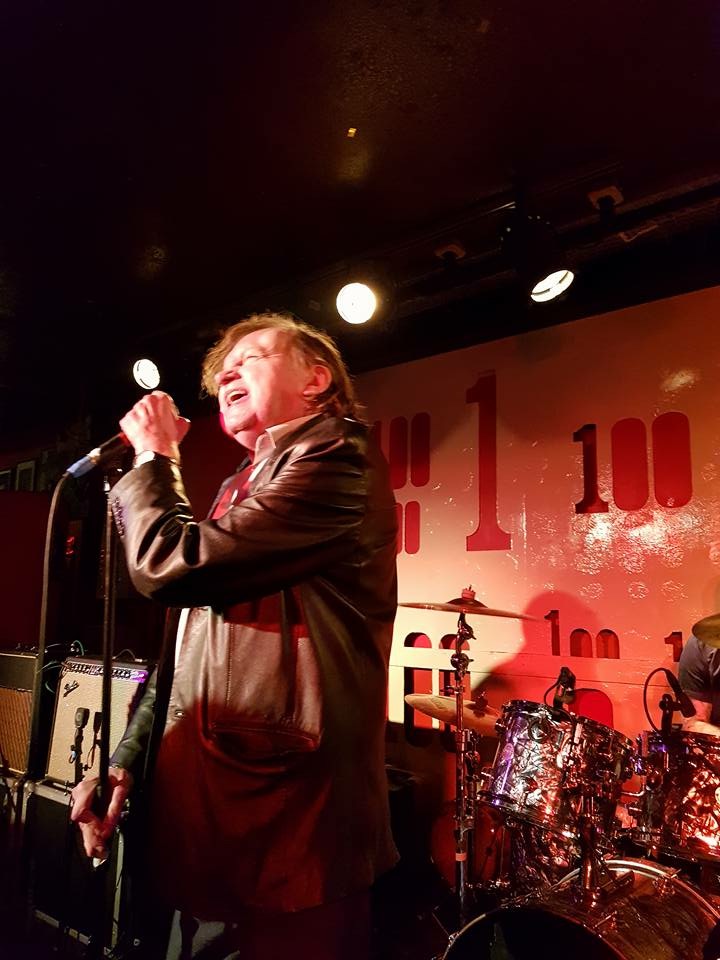 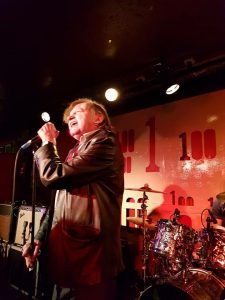 Fall fan Andy Yates reports back from London’s 100 club for Louder Than War. The gig saw a frail looking Mark E Smith deliver part of the set hidden behind a speaker and part back in the dressing room.

‘Words of expectation’ Marmite, The Fall, they kind of go hand in hand. You either do, or you don’t. 1985 the year I found them. Great times indeed. Lost touch late 90s, the usual mix of work, family life and distractions, although my collection was regularly played. 2015, the spark reignited. So much to catch up on. So many sounds. So many styles. Then it hits you. The Fall. It’s a work of art. It’s not static, it’s not staid. It’s an ever evolving soundscape that will never be matched. Unconventional, Individual, creativeness personified.

Modernity, what is it? Well it’s here, right here – under the watchful gaze of Mr Mark E Smith. An inventor, an explorer, an artist. Are we sycophants? No, to hell with that! It’s more a way of life. We just understand, and appreciate not just Smith, but those who shape those sounds. The creative backbones that have toiled for 40 years. But this is now, and all credit to the members who have not only sculpted an incredible new album in ‘New Facts Emerge’ but who toil the live performances to give us something unique on every occasion.

A chance meeting in Manchester’s Night & Day and the offer of a ticket for the 100 club, still 4 weeks away. Would this really come off from someone I barely know? Thursday 27th July 1pm Manchester Piccadilly. A fellow Fall fan true to his word, first class tickets, and 3 of us heading south with much anticipation. The pop of corks and clink of glasses as the train pulls out of our grey homeland. Two hours pass quickly, our excitement building. What will this evening bring? News of the group is always patchy. What will this famous venue offer us? 4 more hours soon pass. The liquor flows, the group of friends grow…. they were multiplying so fast! Our frivolities make us late. Falling into the 100 club we unfortunately catch the last part of Goat Girl’s set and much to my disappointment, as their sound, vibe and general enthusiasm are something I must now explore. A pint is purchased and I take up position just off centre stage where I know I will be well placed between Smith and bassist Dave. I will not move from here until the set is done. Goat Girl finish the set and things are hurriedly readied for the mighty Fall. 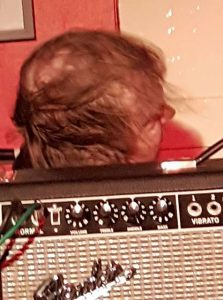 Our merry band is separated. Some prop up the bar, others stand at the back or take their ‘usual’ positions stage left or mid crowd. The anticipation builds but my thoughts wander. This place is claustrophobic, the stage is less than knee high and the equipment is packed in a linear set up. I’ve never seen The Fall play in such a confined space. This legendary club, not quite what I was expecting. How will this similarly legendary band handle the confines? With their new album being released just the following day my mind is imagining a set to mirror this much awaited offering.

Will it be literally the New Facts played in its entirety? I’m kind of hoping it is. Maybe it will be a splash of SLT? But I know for sure the pearls from the 80s won’t be there. No Perverted By Language, no TNSG, no Bend Sinister. Pharmacist seems to be the only nod in that direction these days.

Andrew Wetherall’s set finishes. The adrenalin is pumping, the band arrives, the cheers go up, bang! it’s off. Wolf Kidult Man fires us up and the ambling figure of Smith appears and perches atop an amp. ‘Good evening We are The Fall’ he announces, sending us into joyous rapture. A mosh pit has quickly formed and Smith takes to his feet. It’s only a couple of months since I saw them last at The Transformer Event in Manchester but It’s immediately evident he is struggling, almost gasping for breath. His menacing and phlegm soaked growl is there, but somehow I feel already that this may not be the gig we expected. Not that you can ever expect anything at a Fall show!

My enthusiasm for the music is brimming. The band are really tight tonight and I’m so carried away in the proceedings; laughing, jumping, falling and banging into the low stage with the sway of the mosh pit, (I will discover the next day my legs and knees are black and bruised from my encounter), the songs seem to blend together. My brain isn’t really registering the tracks, just the wall of sound that is engulfing me. That mix of garage, rockabilly, some psychedelic interludes and even a hint of classic Fall.

It takes me a while to notice Smith’s absence from his usual position. His growl is still evident but he seems to be residing almost horizontally behind an amplifier. Dedication brings him back to his feet. And he attacks it like a man possessed. I’m sure this is the last we see of him, as he slips off backstage. His voice seeming to saunter on; interruptions to what has almost become an instrumental rendition. I see Dave Spurr stop playing at one point to readjust the mic stand. In fact he seems to deliver some of the vocals himself.

The band are giving it 100% holding our interest at the front and we too battle on. A hypnotic and really quite aggressive assault on the senses. At one point it seems Smith is singing vocals to one 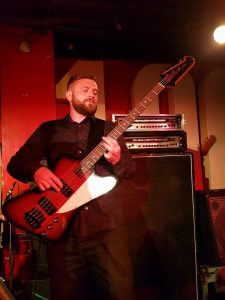 track whilst the band play another, but I could be mistaken. (The set list I have in my hand is definitely not what occurred! Blindness or at least part of it was played, Fall Sound and Bury). Perhaps in true tradition the set finishes with Mr. Pharmacist but I’m sure Smith’s voice is maybe just an odd growl or shout.

Of course what I haven’t mentioned is the bizarre spectacle of Pam taking to the stage. Now the purists among us may have critique to pass on this. For me, it adds to the experience. I know those of us at the front are enjoying her enthusiasm in trying to keep us buoyed up! She grabs the backwash from a pint pot, then launches the empty vessel across the stage. Some of us get up and join her on stage revelling in the madness.

In fact Pam and I lock hands at one point for a short boogie. I head for the mic on Mr Pharmacist but am hastily ejected back to the floor by the crew. Of course it’s all over too soon. The club clears quickly and there is much discussion as bewildered faces exit. I linger a while.

Ok, what have I just witnessed? I dare not quote Mr Peel, but actually I must. ‘The Fall, It may not always be what you want, but it’s still The Fall’ and with that I agree.

Full credit to the band. A very tight set musically. Well done to Pam, I’m not knocking it. It was a great experience. And one I hope I get to see again soon. Get well Mark, we are thinking of you. After all this is Work in Progress, due about …..2026!

Win a pair of tickets to The Toy Dolls 40th Anniversary Tour:

January 27, 2020
0
Keyboard player Nigel Ipinson was there for the last period of the group and on his Instagram has mentioned a book he had written about that period and also a potential third album that was recorded in 2015 that he played on but has never been released...
Read more

Win a pair of tickets to The Toy Dolls 40th Anniversary...