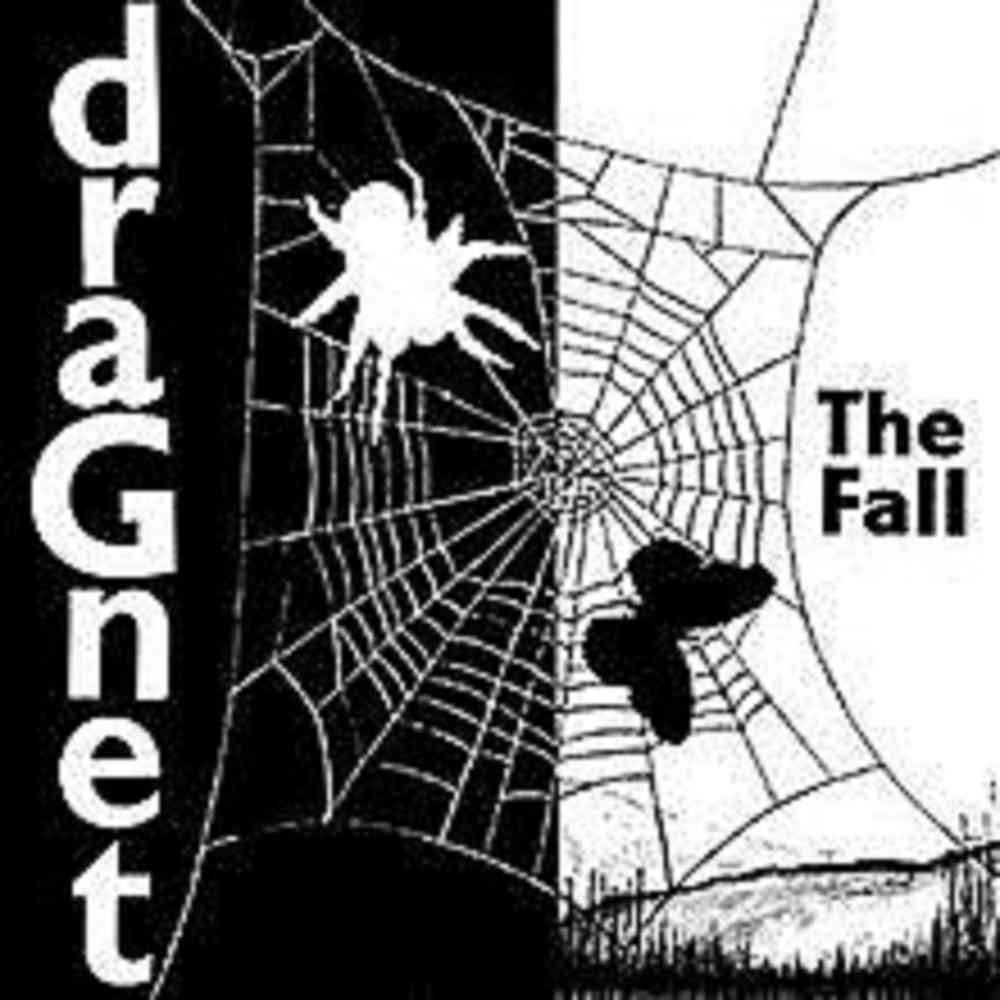 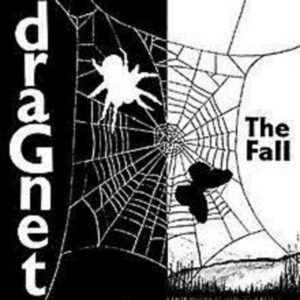 Deluxe reissue of the Fall’s second LP which was recorded for Step Forward Records in 1979. This edition has the two final single for that imprint Rowche Rumble and Fiery Jack, as well as contemporaneous live sets from Retford and Los Angeles….LTW’s Ian Canty looks at what Mark E did next…….

Two albums in a busy 1979 for the Fall, but in no sense could Dragnet be considered a traditional follow up. For a start, the band’s make up had substantially changed. Martin Bramah, so crucial to their original sound, left soon after Live At The Witch Trials was released. Marc Riley switched to guitar alongside newcomer Craig Scanlon and Steve Hanley came in to fill the gap on bass. Yvonne Pawlett was next to go, shortly after the Rowche Rumble single that preceded Dragnet LP and drummer Karl Burns had also decamped, with Mike Leigh from club act Rockin’ Ricky joining in his place. So, an almost complete change of line up was in place come this second LP. There was the definite feeling that band leader Mark E Smith had now assumed total control of the Fall ship with all these changes.

The new personnel naturally resulted in a different sound to Live At The Witch Trials. The absence of keyboards on Dragnet meant guitars dominated and although LATWT was weird sounding, it was an appealing, lucid sort of odd. Dragnet was much more gritty and rough, more rooted in Rock & Roll rather than (as per the then current trend in Post Punk) wanting to destroy it. The clear sound of the Fall’s debut album was replaced here by a muddier and more obscured sonic palette, appearing even a little threadbare musically at times. For example Spector Vs Rector, the album’s real set-piece, certainly threatens to fall apart intermittently. If all this was a move set to confuse the hell out of Post Punk kids, it worked, with many considering Dragnet a backwards step. They also needed to strap themselves in because it was going to be a rough ride all the way along from now on. The Fall simply weren’t about playing “the game”, they set their own rules.

Having said that, Dragnet is at times bright and almost even cheery in manner in a way that Witch Trials isn’t. The alleged inaccessibility of this album has been overplayed, yes if you had been listening solely to the New Wave Pop of 1979 it might have come as a bit of a jolt, but it is hardly difficult listening. It contains some actually quite poppy moments, Your Heart Out and the Bo Diddley bop of The Dice Man springing immediately to mind. The latter, along with the “His Latest Flame” jam of Flat Of Angles, show how far back to original Rock & Roll the Fall were prepared to go at this time. This pretty much set in place the “Northern Rockabilly” sound that would become a constant fixture in their work.

But we’re getting ahead of ourselves. The album begins with Psykick Dancehall, the opening of a cheerful call and response of “Is there anybody there?” “Yeah!” may lull one into a false sense of security, but mentions of ESP and a monster on a roof early on let you know early on you weren’t listening to Squeeze. This leads onto the downbeat paranoiac dread of A Figure Walks, inspired by Smith’s anorak-clad constitutionals in the rain, where there’s always the threat of someone or something grabbing your coattails. There’s a growing sense of unease in this song, something that permeates Dragnet as a whole. The M.R. James namecheck in Spector Vs Rector was no red herring – far more macabre and unsettling than anything “goth”, with a grim humour in the detached observation.

Printhead is the kind of classic Fall sneer that the band would come up with right through the years, with Kicker Conspiracy and Deadbeat Descendent being later entries in this particular series. This one is all set in place by Smith’s “hey you horror face” shout, the lyric a critique of the music press that admits complicity “we laughed with them, when it was take-the-piss time” but also “there’s a barrier between writer and singer”. Grimy VU is recast for spooky new age on Before The Moon Falls and Punk cartoonist The Savage Pencil features in the lyric on the aforementioned Your Heart Out, which is very catchy after a fashion, nullifying critical barbs with the pithy concession “I don’t sing I just shout”.

Muzorewi’s Daughter has always been a favourite of mine, probably a bit of it being that it’s got that curious yelp that only Smith could pull of and broods nicely in building up to it. Choc-Stock is tuneful, almost perky Fall, exuberant and again quite appealing, but with a sting in the tail as usual. The album ends with Put Away which featured in the second Peel session of 1978, perhaps one final look back to the old Fall. Even this is endowed with a pure 50s Rock & Roll lurch, bringing it into line with the rest of Dragnet so that it doesn’t feel like an add on.

Added to the album itself we get both sides of the Rowche Rumble and Fiery Jack singles, rounding out the rest of their later Step Forward output (the other SF stuff is available on the Live At The Witch Trials re-issue, also out on the same day and reviewed elsewhere on LTW). They’re both ace and if Rowche Rumble shows the Fall edging towards the Dragnet sound, Fiery Jack points directly to the future with the more focussed third LP Grotesque. One of the two tracks on the flip (the other is another go at Psykick Dancehall) 2nd Dark Age is a lost Fall gems of the era, addictive crunchy riffing and Smith on withering form with Marc Riley showing up strongly on backing vocals.

Also there are 4 other takes of Rowche Rumble and 2 of In My Area, with 3 and 5 or Rowche and 1 of In My Area being fragments/false starts. The longer versions of these tracks are ok, but you can see why they went for the released versions, a hollow drum sound on Rowche not really doing the trick. In My Area’s almost Country Rock sound is offset against some nice keyboards from the soon to depart Pawlett, taken a little faster on second bonus take.

The first disc here to all intents and purposes replicates the 2004 Sanctuary Records reissue, so whether you want to invest in the edition as well is going to hinge on how much you want the two live sets from Retford and Los Angeles, both taped in the second half of 1979. Each contain a liberal amount of Dragnet material, with a few older favourites peppering both sets.

The Retford performance is presented in a reasonable bootleg quality sound, you can hear the band pretty well. Unfortunately Smith’s voice is a bit difficult to hear at time during the songs, which does kind of negate the point a little. Having said that, you do get the opportunity to hear this version of the band in full ramshackle flight. Even in the supposed ideal world of Post Punk is painted as in these days there were detractors, including an audience member who yells “get your f***ing hair cut”, presumably at Smith. It’s a pretty good set with a fuzzy Choc-Stock being the highlight for me. They do finish with a couple of crowd-pleasing oldies in the form of a thunderous No Xmas For John Quays and a near unlistenable Psycho Mafia. Probably much more fun if you were there.

For me the Los Angeles set trumps Retford though, being a bit clearer sound-wise with plenty of crowd ambience and Mark sounds in good form, even laughing and a bit playful. Starting with a Smith rap about new puritans, the band shows it is primed and ready on Psykick Dancehall and the following Rowche Rumble gives one an intense thrill. Here the Fall revisit Stepping Out from the Short Circuit mini-LP of 1978 and also Various Times, the flip of It’s the New Thing. Rebellious Jukebox is given a spunky refit and Spector vs Rector here is a thing of drawn-out unwieldy beauty, changing pace lithely from static jam to the frantic semi-rave ups. A great version of Muzorewi’s Daughter ends this set, plaintive thump and rhyme leading up to the chanted two word hook.

Dragnet may not have been the follow up some fans had hoped for after the debut album, but it has grown in stature as the years passed. In effect this record opened up the future of the Fall, grubby and sometimes more than a little confusing, but marked by brilliance. They weren’t going to make it easy for you and Mark E was going to do it his own way. They stood alone, but this second LP was a lot more accessible than it has been made out to be and the seeds of the Fall’s Post Punk version of Rockabilly Bop can be seen at their earliest stage. Everything else would make sense after Dragnet, whereas the first long player is a really enjoyable piece that could be viewed as separate to the rest of the Fall’s canon

The sleeve-note puzzlingly concludes with a statement positing that “the real work” was to begin with the move to Rough Trade. While there’s no doubt that the Fall would present many a sterling effort with that imprint and on into the future, a vast majority of bands through history would be more than happy to produce anything near as good as the Fall did whilst with Step Forward. Along with LATWT, Dragnet put in place the solid foundations for the Fall to amaze for four decades and is compulsive to this listener all these years, demanding effort yes but that effort is more than rewarded. It was important that the Fall moved on fast from their debut and by gum they did with Dragnet.