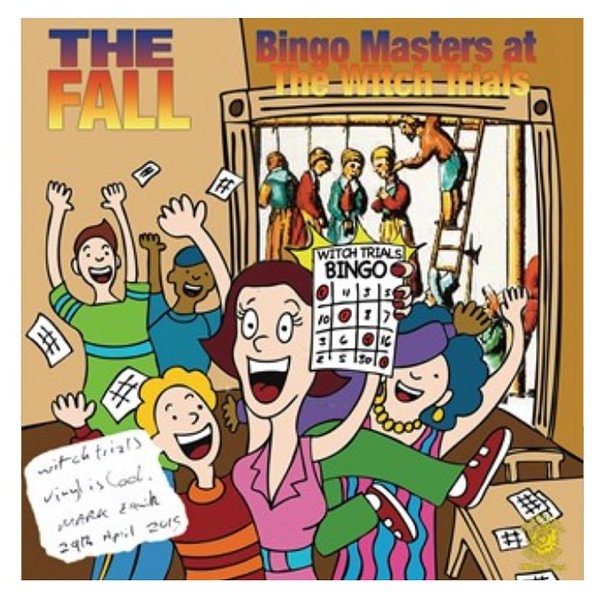 
Mick Middles was the key music journalist in Manchester in the post punk era. His writing at the time perfectly captured the city in flux and he was well placed to see the emergence of the classic bands of the era. Mick still writes brilliantly about music then and now…

While The Fall appear to enjoy tripping into a fourth decade and dragging besotted audiences along with their eternal, if not evergreen thrust, we ‘look back bores’ prefer to skim through the years, cherry-picking golden moments. Of which, without question, there are so many. The first five albums for a start. Wall-to-wall brilliance. A band, or several bands, simply flowing with unprecedented inventive intelligence. A word-heavy flow that seeped so effortlessly into unlikely literary territory. Naturally, this couldn’t last and The Fall would career through years of lows and highs. We all have our favourites. I’ll keep mine hidden. However, my softest spot will always be reserved for The Fall’s first and second versions, lodged between embryonic craziness of ’76 and the full on post-punk attack of ’79.

This album, being a live take from Chris Hewitt’s 1978 Deeply Vale Festival, set high on the moors that separate Rochdale from Bury, captures the band just as they move into their second phase. Una Baines had departed her gorgeous wonky keyboard position – amid considerable acrimony – although her future Blue Orchids collaborator, Martin Bramah, was still onboard. Bass player Tony Friel had jumped ship for The Passage in December 1977 and his immediate replacement, Jonnie Brown, had only lasted two months to be replaced by beery 18 year old, Marc Riley, straight out of school. Yvonne Pawlett had arrived, bring her slightly more beefy keyboards into the mix while, in-between this muddle, Eric Randon had briefly tinkled the ivories. In addition to this state of transience – which would set a precedent lasting down the decades – Mark Smith’s new girlfriend, Kay Carroll, had crashed into a feisty hands-on managerial position. No wonder Marc Riley recalls that the band’s Deeply performance was “…a bit ragged”.

Ragged it was and ragged it remains, here, now, on freshly mounted heavy duty ‘orange’ vinyl. All clasped in colourful gate-folded magnificence. What a lovely artefact. Yes, I recognise, that a few long forgotten words from myself acts as sleeve notes and, frankly, they surprised me as much as the music.

Whatever, this is the Fall that I love the most. An inspired mixing of hallucinogenics and beer, the moody shadows cast by the architecture of Prestwich, speed procured from Manchester punky Ranch Bar. Mark and Una – and then Mark and Kay, were living on Kingswood Road, directly opposite Prestwich Hospital, a legendary institution where both Una and Kay had worked and The Fall, incredibly, had performed. What an extraordinary gig that must have been. Often inmates would be invited across the street to spend leisure time in The Fall flat. The subsequent stories would also heavily flavour many of the songs that scattered across their debut album, Live at the Witch Trials and indeed, this live outing.

Never was a festival and a band so neatly balanced. Deeply Vale occurred six times and without doubt became one of the truly iconic free festivals. Etched into dark, moody moorland, it became an essential stop-over for genuine travellers, anarchic hippies, left field punks, Rastas and tripped out space monkeys. Within the context of the divisive years of ’76 to ’79. when street battles between far right and far left hovered in the mainstream news, this seemed extraordinarily subversive. Where else would you find a bill that stretched from Here and Now to The Ruts, Steve Hillage to The Distractions and dozens of distinctive outfits trapped within those boundaries. All played out before and audience that spanned the entire spectrum of youth- and not so youthful – culture. How perfect for the Fall. A band who, themselves refused to sit within any traceable genre (Well, at least until Simon Reynolds invented the term ‘post punk’).

What we find here, with this bizarrely titled album, is a lovely paradox. As an artefact, it little short of lavish. Lovely gate-folded magnificence. I was there, sitting on a hillock with a head full of mushroom, watching The Fall’s set unfold in all its spindly irony topped, of course, by Smith’s relentless verbal attacks. That this discordant vitriol would one day emerge on heavy duty orange vinyl, would have seemed truly absurd back then…and it still does.

But, as a snapshot of a vivid moment from a lost time, a lost world, it is simply perfect. The songs presented here would, in January 1979, form the band’s extraordinary debut, ‘Live at the Witch Trials’, In addition is the material from the first two singles, ‘Bingo Masters Breakout’ and ‘It’s the New Thing’. All of which were released on Mark Perry’s innovative Step Forward records and Perry, in the guise of Alternative TV leader, also appeared on the same day as The Fall. All very cosy.

Do not expect, however, the sound quality to fit levelly with the sumptuous artefact. It doesn’t. Well, how could it? It is taken directly from the mixing desk on the day and, in places, Marc Riley’s description as ‘a bit ragged’ seems something of an understatement. Nevertheless, it is never less than charming. Fascinatingly so for both ex Deeply attendees and those who merely wish to glimpse a time of glorious simplicity.

Tony Wilson, then locally famous as the man who looked at you from the television screen as you munched your fish fingers, introduced the band and now maintains a ghostly presence on the grainy shot on the rear sleeve. Smith’s piercing intro-rant, a standard and much loved feature of early Fall, leads thrillingly into the artless belligerence of ‘Repetition’. One of the songs strongly flavoured by the aforementioned hospital experiences. “When I was on the Witch Trials of the 20 Century, they said ‘you are an aesthetic anaesthetic’. I am not sure quite what that meant to the poor huddled masses stage-front, but it sounded reasonably good. In typical Fall style, they trip into their most difficult and uncompromising song in of the entire set at the top. It is defiant trick that quite often – in Chorley Working Man’s Club, for example – would instantly trigger violent audience reaction. That was, after all, the point. This was a band absolutely flowing with inventive lyrical and musical twists that defied the embryonic nature of their musicality. But these twists- ‘Psycho-Mafia’, ‘Rebellious Jukebox’, ‘Steppin’ Out’ – just wormed their way into the crowd who would, maybe, pick up on the singer’s idiosyncratic phrasing. ‘Steppin’ Out’, for instance, would deliver a ‘be careful’ warning to those who would gormlessly soak in anything that appeared in the guise of youth culture. It is a song of growing awareness, a theme soon to be duplicated by Magazine’s ‘My Mind Aint So Open’.

‘Industrial Estate’ is a simple evocation of the grimy reality of working in an office at Salford Docks (Smith) and walking through the numbing expanse of Old Trafford while ‘Bingo Masters Breakout’ is Mark’s reaction after his parents had taken him to the crumbly bingo hall on the crossroads of Bury New Road. To listen to this imagery spinning through Deeply is the simple depiction of the band’s celebrated uniqueness.

It doesn’t always work. ‘Music Scene’, elongated into absurdity on the studio album, seems rather submerged here although the one cover version, the closing ‘Brand New Cadillac’ (Vince Taylor) provided a cynical twist on standard rock band fare of using the familiarity of fading rock’n’roll to beef up the crowd reaction.

Of course, at Deeply Vale in 1978, it was impossible for anyone to be able to grasp the complex longevity that would soon define this eternally fluctuating band. In retrospect it is easy to note the splintered dynamic.

On the stage photograph that adorned the inner-gatefold, Bramah, once the Fall king-pin, seems detached to the left in shoe-gazing stance. Smith, by contrast, seems fist-punchingly intense. Without a shadow of a doubt, lost in steely determination to move this band, HIS band, forward. After a year spent performing in dubious low brow cabaret haunts, working men’s clubs and blackened cellar rock venues, the Fall found Deeply Vale and, in doing so, found the basis of their future disparate audience.