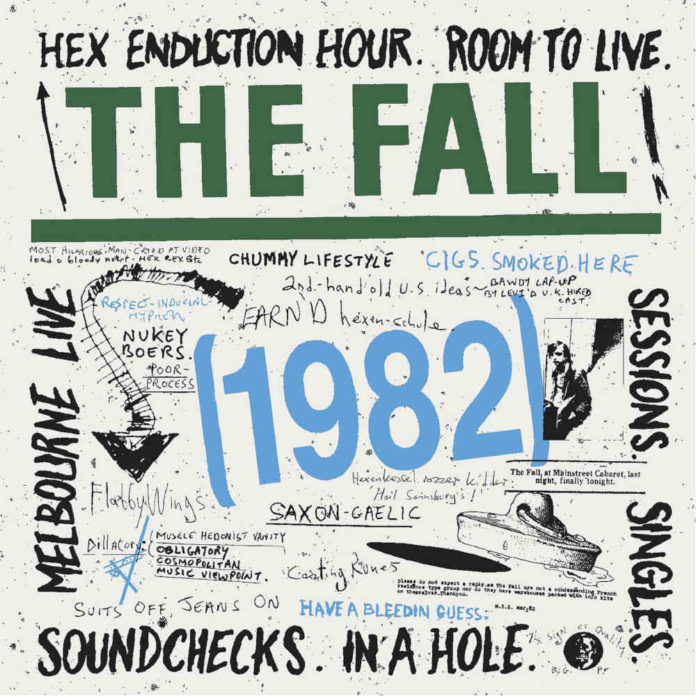 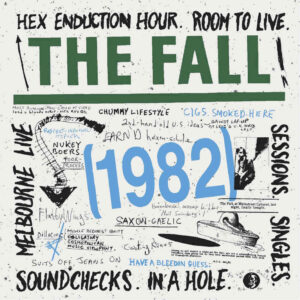 ‘Classic Line-up’ Fall at arguably the peak of their powers. Hex Enduction Hour, Room To Live, Soundchecks, Sessions and Singles, In A Hole (double-live album) and Live To Air In Melbourne ’82 all in a nice box.

More ink has been spilt on writing about the Fall than any other hip, indie, post-punk band ever.  And since Mark E shuffled off even more psueds come to worship and praise him.

But, he wasn’t Jesus, he was just a fella.

But, OK, a brilliant fellow…

Eight hours of prime Fall on six discs is pretty damn unbeatable for less than forty quid if your original vinyl is knackered.

Completists and pedants will whinge and whine … for after Witch Trials and Dragnet, which the Fall Sound Archive released, beautifully packaged and presented, should come Grotesque (After The Gramme) and Totale’s Turn and the Slates EP for they were chronologically the next. But Rough Trade or whomsoever has ‘the rights’ are not co-operating with Cherry Red.  This presumably means that the Live In London (Chaos Tapes) album, one of my personal favourite Fall artefacts, won’t get a reissue either in this series.

I know I am being a look-back-bore and anally retentive here, but it is a shame as Side One of Grotesque is The Fall at arguably their very best, (Witch Trials aside). If I had to pick just one definitive Fall-song it would be New Face In Hell every time. (It is not herein – but two live versions of The Classical are compensation enough perhaps)

That said Hex Enduction Hour (after much discussion, much discussion) is the Fan’s Favourite Fall Elpee. Extensive background can be found in the 4,000-word essay by Daryl Easlea included in the box of delights. (And there is Paul Hanleys book -see bottom of page).

Personally I still think it would have been an idea to leave-off Iceland & And This Day to make it a more focused Three-Quarters of an Hour. This is probably down to the fact that for a decade I only had the first 45 minutes on one side of a C90 cassette taped by a mate (with Junkyard by the Birthday Party on the other side – looking back, the only two decent albums which came out that year! )

There is no culture is my brag is an ironic opening line as the Fall and now-dead Mark E Smith have become a bastion of pop culture anti-heroism and a reference point for all future prole-art-threats e.g  Sleaford Mods, Fat White Fam etcetera etcetera.

The Classical is so good it’s the musical equivalent of an unexpected erection in the middle of an unremarkable day.  Never has bile sounded so joyful and sarcasm so sweet: I’ve never felt better in my liiiiife’.

Jaw-Bone and the Air Rifle is a pinnacle of Smiths pagan mystic story-telling.  It’s a surrealist parable which will forever baffle and delight.  Musically wonderful too.

Hip Priest is the Fall as a band at their most experimental and self-referential yet transcendental and almost dub-like.

The Hanley/Burns/Riley line-up play with precision and abandon, sympathetic to Smith at his most scathing and brilliant.  Personally I disagree with Mark E’s assertion (in retrospect) that this was the first time he was “At a point where I knew I was alone with my ideas”.  How could Smith take credit for those bass-lines and playing?

Room To Live though, I can see was deliberate self-sabotage to stop the band becoming a big, hollow, bombastic rock band ‘like Echo & the Bunnymen’.  It certainly put me off the Fall for a while.

The live discs are both an absolute joy and a bit of a chore – the sets were marathon, endurance-tests or value-for-money if you were an unwavering disciple.

Listening to In A Hole  – I was surprised still how disorientating it sounds: queasily psychedelic but out on its own, despite many attempts at being Fall-like-in-essence by other lesser bands.

And if you look carefully you will see that Marc Riley has a Joker Hysterical Face is the best song intro ever uttered.

Highlights of the Live sets are, to my mind, the frantic run-troughs of older songs  -the blitzkrieg bop of John Quays on Disc 5 – with Smiths bizarre ad-libbing  ‘And Quasimodo was there / With his friend Bugs the Bear.’

Container Drivers on the same disc is frantically wonderful – with the fastest cow-bell you’ll hear!  C-in-C Black Night too is a stupendous mash-up of the repetitious Grotesque track and Deep Purple song – brought to a sudden end by a finger on the off-button of the tape recorder!

It is a smartly packaged boxset (when did ‘Boxed set’  become boxset FFS?) and we will never see a band quite like the Fall again because basically nowadays there is no way an individual like Mark E Smith would ever get a foothold in the actual proper “Music Business” and get the consistent support of someone well-placed in a nationwide broadcasting corporation.

Of all The Fall’s myriad log-players, Hex Enduction Hour remains one of their most highly regarded. Even the circumstances of its recording, purportedly in an abandoned cinema and a cave formed from Icelandic lava, have achieved legendary status among their ever-loyal fanbase. HAVE A BLEEDIN GUESS tells the full story of the album, including how each song was written, performed and recorded. It also includes new interviews with key players.

Author Paul Hanley, who was one of The Fall’s two drummers when Hex was created, is uniquely placed to discuss the album’s impact, both when it was released and in the ensuing years.