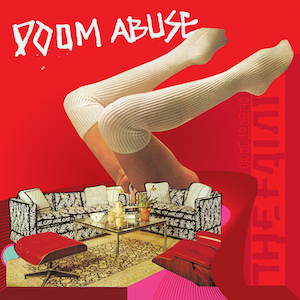 Indie rock / dance punk band The Faint have been going nearly 10 years now and have just put out their latest album Doom Abuse, which Louder Than War’s Lisa Sookraj here reviews for us.

When the retro revival that continues to influence today’s indie and alt rock bands started in the late 90s, with bands like The Strokes, The Hives and Interpol, The Faint stood apart with the danceability of their dark new wave sound. Gap-bridging between alt rock and electronic dance music was common at the time, with successes like Radiohead’s Kid A and Amnesiac. The Faint had similar success, appealing not only to appreciators of synthpop, but the indie hipsters too.

Bands often find themselves in that tough spot after their first success to deliver what is expected without being criticised for sounding too redundant on their following releases. This is particularly difficult for bands who have a very niche sound, like The Faint’s. After a hiatus following their 2008 release Fasciinatiion, the band has returned with Doom Abuse and managed to deliver without entirely repeating themselves.

While the band’s biggest success was their third album, 2001s Dance Macabre, my personal favourite remains their 2nd album 1999s Blank-Wave Arcade, which seemed more legitimately synthpop meets punk, and as such featured less of the potentially trying-too-hard moments that interfered on the bands later albums.

Though Doom Abuse on the whole may not be The Faint’s best work, it could be a lot worse, and I expected it to be. At its best, the album features some of the aesthetic of Blank-Wave Arcade, spazzy electro-rock with an at times goth, other times punk, edge. Beyond that, this album possesses perhaps the most legitimately new wave feel of all their albums. It certainly isn’t their lowest quality work (their last album, 2008’s Fascination, and outshines 2004’s Wet From Birth as well).

Both musically and vocally, “Stranger,” my favourite track on the album, has a bit of a Devo feel. “Scapegoat,” is another of the strongest tracks – a hyper synthpoppy, lazer-studded romp, though I was initially put off by the teen-anthem-like quality of the vocals on the chorus. “Unseen Hand” and “Help in the Head” (see video below) also don’t disappoint with the revving punchiness the Faint are known for.

Well paired with the dark atmosphere are recurrent lyrical themes: heads that need help, insecurity, anxiety and inappropriate things said while drunk and the ensuing regret the following day in “Damage control”. While some of the attempts at more socio-economic commentary may seen a bit forced, these other lyrics strike me as fairly sincere, especially the desperation in the refrains of “I don’t want to be your nothing” and “I think myself to pieces” in “Stranger” which anyone who has been crazy about anyone else can relate to.

The only unfortunate thing is some over-the-top, cheese elements – for one, the album and song titles. Otherwise, it tends to be the choice in vocal stylings – which detract from what could otherwise be a purely stylish sound. “Evil Voices” features some classic Faint hooks, but is somewhat damped by the occasional vocoder vocals. One of my other favourites, the relentless “Salt My Doom” sounds like a punkier NIN meets Gary Numan, and while the raspy Korn-esque “give it to me” that peppers the track doesn’t ruin it entirely, it does cheapen it.

“Mental radio,” features an almost Soft-Cell sound and some great glitchiness, but the chorus’ droning vocals disappoint. The anticlimactic “Animals” doesn’t deliver much in the way of interest structurally. The attempt at commentary on consumer culture takes the form of a list of things that feels lazy, repetitive and overdone quickly.

On the whole however, Doom Abuse is an energetic album that sounds like hyper, modern new-wave at its best perhaps. Instead of attempting to replicate any specific new wave bands in particular like other artists (Cold Cave), some of the legit tendencies and sounds of the genre are made high-tech, souped up and utilized in concert with the typical, heaviness The Faint are known for.

After a hiatus and at this point in their career, the reception of Doom Abuse and its tour may determine whether this ends up being The Faint’s last release. Listening to this album reminds me that while this band is enjoyable on headphones or at home, they are really a band to dance to live, at their shows which are impressively-80s dance parties. I certainly would not miss them on this tour.

All words by Lisa Sookraj, find her Louder Than War writing here.