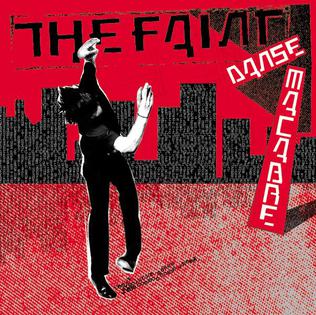 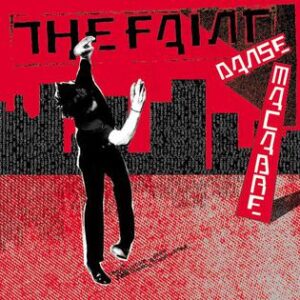 The “Danse Macabre,” oft-depicted in the art of the Middle Ages, is the popular allegory of the time that it is the “dance of death” that unites us all. Its an ominous title for an album which sounds as unflinchingly sharp two decades as it did upon release. In the world of The Faint, it is less about the danse macabre uniting us and more about the industrial path of drudgery that drives us closer to it as a factor of division.

Danse Macabre was their album (fourth if you count their earlier earlier, very different incarnation as Norman Bailer) and with a sound that had morphed from the indie of their first album to the more synth-heavy sound of their second record “Blank Wave Arcade.” It absolutely reverses the idea that third albums can be tricky or struggling for ideas, instead reflecting a band who had truly found their feet.

Everything about it pulls together into an evocative concept. The artwork strongly evokes Constructivist art, and in a synaesthesia-friendly fashion so does the music (Kazmir Malevich’s Attentive Worker is evoked immediately a sound stripped of the unnecessary, to the point, bold, and with plenty to say on industrial society.)

Opener Agenda Suicide is an uncomfortably forthright look at just what this society does to its “drone” citizens and workers, against a backdrop of fresh, sharp synths that morph into a mix of screams and avant-garde danceability straight from a Bauhaus ballet. The theme of the danse macabre continues of Glass Danse, looking through the prisms of modern society to a wider, conscious anxiety.

The themes are claustrophobic, but rather than choosing that anxiety aural fog the crisp, bold nature feels like a video game you can’t step out of, something continued on Total Job and its spoken word fragments. Nothing lets up from here. Even the song titles alone – Posed To Death, Violent, and Let The Poison Spill From Your Throat – ooze intensity. The latter’s lyrical content of “the pressures unreal, you scream until its gone,” is twinned with synths that pound and squall,  the production (a collaborative between the band themselves and Mike Mogis)bold and forthright.

Strong echoes of the synth acts of Northern industrial Britain of the late Seventies and early Eighties resonate in both sounds and themes. Meanwhile, The Conductor has an almost ominous feeling, the tension of a Japanese fighting sequence seeming to creep up through its sound, And yet the lyrics appear straightforward, literally about a conductor. So well evoked is the world they have built by this point that its hard to imagine the Conductor is either a metaphor or a Constructivist-era one, even though the references are far more modern than that.

After pulling us in with a vermillion shout through Agenda Suicide and Glass Danse, things are wound down slower, but the intensity never falters. Violent is exactly as the title implies, building up slowly of strings and squalling synths to create something hugely atmospheric. The longest track on the album at over five minutes, it is given true space to breathe, it’s lyrics on murdered mothers and a girl choked for not paying back a loan shining a light on the very worst of the world around us. On a (very full-on) album very much about wider industrial society, the focus on an individual in the closer Ballad Of A Paralysed Citizen along with its contrastingly minimal sound, makes these closing tracks all the more intimate and haunting.

Danse Macabre is an album that wears it influences on its sleeve to create a cross-generational mix – drawing from the past to comment on the future, and sounding futuristic along the way. Twenty years, “the stab in the throat from a Bauhaus ballerina” sound is just as powerful. In an ever-broken society, it warrants discovery more than ever.