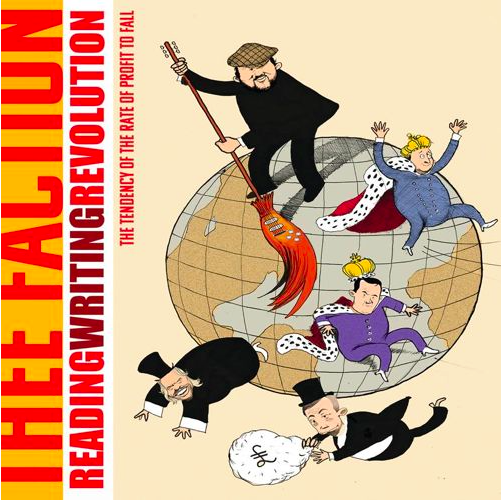 Thee Faction have released a free download of a track, Choose Your Enemy, taken off their new album. To get it you need to go to the band’s Soundcloud page and click on the downward pointing button underneath the track itself! And to hear it just click play on the video above – or head over to the band’s blog. Ngaire Orsborn fills us in with more details below.

It’s never too late to shake your pom poms and chant Tories Out.

This crew, Thee Faction, who call each other comrades, and include Billy Brentford from Theaudience, a Thee Hypnotic and a Senseless Thing in their number, are all about a mutual commitment to socialism and an inability to leave those loud guitars alone – not to mention the keyboards, drums and a rousing brass section.

In the end, it’s the tension between righteous attitude and hedonism that makes Thee Faction’s sound so addictive.

You need to know:

The talented Colour Me Wednesday women shot the video (above) while munching cucumbers and carrots, and doing yoga in breaks; all ubercool and Zen like while toddlers screamed and ran around banging instruments around them. The kids in the video are Thee Faction’s and friends, which includes the daughter of an ex-Linus member.

Apparently, now the children recognise Cameron and Farage on the TV and shout “NAUGHTY MAN” at them and try to hit the TV with things. Billy is absent from this video  because they had to film it on a Saturday and he does football commentary on the radio (Brentford), but if you have a Glastonbury ticket you can catch them in all their glory on The Left Field Stage at Glastonbury on Saturday 27th June (tomorrow!)

To buy the band’s new album on CD for £7 (including P&P) head over here: theefaction.wordpress.com/download-choose-your-enemy.