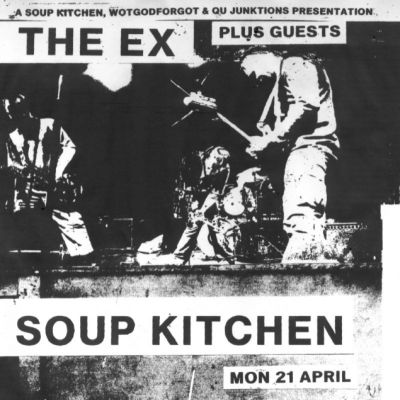 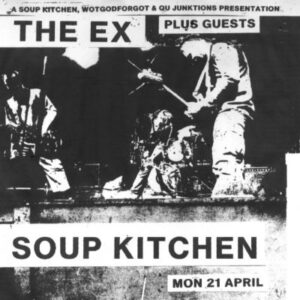 John Robb catches up with the legendary Dutch underground band and decides that they are still ‘clanking, hypnotic, experimental music to have a good time to and that keeps your mind jiving as much as your feet…’

In 2014 they sell out venues with a full room of joyous dancing music heads who still inhabit a true undergound/alternative world. All kids of twitching dance steps are going on from the audience of younger hipters with rough hewn hair who have somehow found the Ex and veterans of this kind of brilliant music with a mixture of diehards and new heads who have joined the merry throng after falling in love with the band. Perhaps the new generation Exophiles have arrived after the band seem to have become the deserved house band at the ATP festivals where their innovative grind has struck a chord.

The Dutch outfit, of course, are no new hipster crew but have been carving away, chipping away at this block of sound for decades and honing it down to a sonic sculpture of clanking, grinding perfection. Only a unique band like this with decades of experience can somehow combine post punk, experimental. free jazz, folk music and Ethiopian and African flavours and make it all sound cutting edge and new.

Me and The Ex go back a long way. 30 years ago we used to play many gigs together with the Membranes and we would always stay with them in Holland in their unique squats.

Formed in the post punk era in the Dutch squats as a homegrown take on the ideas, adventures and idealistic politics of Crass with the noisier end of the British post punk underground the band swiftly set out on their own homegrown journey built around aural guerrilla Terrie’s clanking, grinding guitar and Kat’s poly-rhythmic octopus armed approach to drumming and Jos’s direct poetry-politick vocals.

Over the years the line up has shape shifted but the aesthetic remains the same. In 2014 they have finally been embraced by an audience in the UK and a packed venue is in party mood for a band who still create a serious music but with an infectious fun element thrown in as they revel in the sheer joy of their creations and life itself. This is no earnest display but a discordant party of energy and imagination that still encompass the bands rhythmic joy that sits somewhere to the side of the likes of Shellac and fellow noise travellers who have pureed the noise end of post punk to their own perfection over the decades.

These days Terrie is joined by ex Dog Faced Hermans guitar player Andy Moore in a twin guitar assault that underlines the rhythmic assault of the band as their guitars weave like a very non rock n roll version of the Rolling Stones similar love of the twin leads. Only the Ex don’t use normal guitars- Terrie still clanks away at a six string that looks like it was hammered together by trolls in some noisy forge whilst Andy’s guitar is a baritone giving him the opportunity to play bass and guitar at the same time in a highly effective manner.

The ever radiant Kat still does that amazing drum thing, taking the occasional break to sing some folk or Ethiopian song and then returns to the kit and her stunning rhythms and clanking cowbells whilst relatively new member Arnold is singing with a more direct and punkish intense way than when he joined the band giving them a new fire and focus.

They may not have that Ethiopian horn section with them this time but somehow sound even more joyous than ever with asetculled from recent albums that underline the group’s restless innovation. This is the most unlikely ‘best party band in the world’ but as the whole room dances on the bones of the collapse of capitalism and the Ex shift several gears in yet another hypnotic song that does the classic post punk thing of all instruments playing lead at once, it’s hard to argue with the notion that this kind of discordant and fiery rush can be anything but music to have a good time to that keeps your mind jiving as much as your feet.

Breaking every pointless rule tossed at rock ‘n’ roll The Ex are a law unto themselves.