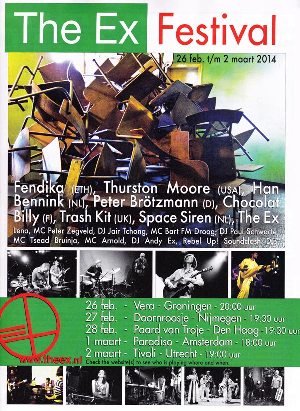 Utrecht has many charms, and one of them is that on a Sunday afternoon, it feels like the laziest city on the planet. And on this particular Sunday, this was a very good thing as we were fucking fried.

Incendiary decided to team up with Wot Nxt’s Marcel, and groove on down to the opening of Rob Scholte’s ULTRA art exhibition, drink free wine, eat impossible-to-find-anywhere-else-but-a-gallery-opening snacks, and meet the great man himself. All of which we duly did. But even with the free wine on board, the effects of two nights of The Ex Festival was enough to rotate your reviewer’s chakras like a sock in a spin dryer. And we had the festy’s finale at lovely old Tivoli Oudegracht to go.

Could we last? We had to. Watching a gig at Oudegracht is always a pleasure. And tonight was fitting really, seeing The Ex roughly date to the same time as when the Tivoli was squatted; with the eviction leading to running battles between kraakers and the ME boys. Unimaginable nowadays, in this transformed city centre, replete with its face cream usage and weird home ornament shoppes.

Thence, thus, therefore… the Tivoli! As ever with this festival, the running order for the lineup changed, and we began with Trash Kit, who had saved their best show for this evening. Somehow they felt looser and more impish on this stage; their spindly, interlocking sound balanced by a bigger bass rumble. There was this nice air of concentration about them too; it’s as if they could have fallen apart at any minute, (though to be honest the bass drum was falling apart and needed bassist Ros Murray’s boot to stop it rolling away) but this tension, and the feeling they were really enjoying themselves, made it a really great gig. Then Chocolat Billy; who were more deranged and up for it than normal, even though a load of leads came out of guitars and keyboards at inappropriate moments. And, oh yeah; the band members had switched instruments once again… Is there ONE of them who can’t play something?? Watching them is like that bit in Master and Margarita, when Woland, Azazello and Behemoth put on a show at the theatre. It’s weird, slightly sinister and bloody surreal. Unlike the Bulgakov novel, though, shit doesn’t go horribly wrong with Chocolat Billy. Oh no, we have a great time trying to negotiate their hyperventilating teacher-prog grooves, and high octane Emo take on Barry Ryan’s whole oeuvre. Intense fun.

Space Siren? On a big stage? Believe.  With amplification and a sympathetic soundman this band delivers like no other. Dutch pop venues! Speculate to accumulate, let your bands on the main stage…it may just bring rewards! And this was a fabulous gig, zinging ideas that were far too hippy to contemplate from the nether regions of the right hand side of my brain into my consciousness. See, after being pulled under the wave of glorious, multidimensional sound that Space Siren created, (the new one where Gwen just chants/shouts something like “down, down, down”) I now think (no believe) that the band members represent moon, earth, water and sun. No, I have not been listening to Walter Wegmueller again, BUT this was the sort of performance that just allowed the audience to get completely lost in the Baroque splendour of their four pronged attack. Spear me on your trident Neptune! I needs to take off with a Sea Nymph!

Thurston Moore was on next; no doubt fired up by Space Siren’s blitz (he’s a Head, he checks shit out, I know) and up for mischief with the crowd. This was a great gig, my favourite of his of all the three nights we saw; by far. Almost without a pause, Moore strode onstage and kicked out his jams. He started to mix up some sulph’rous drones with a harsh smattering of sludgy tones and shards of noise; their glutinous quality making them sound like rusty and barnacled metal nuggets spewed up from the belly of a whale. His poetry was goooood tonight, too; feeling much more suggestive and better paced, not so sonorous, more impish… It’s wordplay, clever doggerel, sub Baudelaire stuff I feel, but tonight he played with it rather than offered it up, and that made a massive difference.  Not only that; seemingly energized by from his roll-about antics in the Paradiso, Moore pulled out the stops in engaging his audience. Not content with just grabbing one dude and entwining limbs, he jumped into the crowd, rubbed his guitar on them, lolled about the floor, pushed the screeching strings in people’s faces, down people’s backs… Woah! This was getting mighty sensual. A top gig and he held the room like a cat does a kitten.

Time for The Ex. Could they top the previous nights? The room was absolutely buzzing, frankly, they couldn’t fail. And the thunderous sound the Tivoli offered up was perfect for the band on the night, allowing this huge backdrop to their sound, which Terrie, Andy and Arnold punctured with their rasping, saw-like guitar parts. The place was dancing, grooving, wigging out, people were throwing Ethiopian food about and laughing at the sheer madness of The Ex playing to a massive crowd at a great old venue.  Frankly they were unstoppable on this night; a mad charge into the valley, clanking and rattling around like a washing machine that’s suddenly torn up its ASBO, escaped from the local electrics shop and chuntered down the road in search of a suitable mate. Tonight the slow burners were extra good; their cosmic, baked-earth rumble somehow allowing serene, zen-like moments in the heady atmosphere, allowing people breathing space. Maybe I was The Pilot was kicking, as was Bicycle Illusion and just like at Paradiso we had the spectacular Fendika ending, which was visceral and madcap and scary in equal parts. In the week where lots of people spend fortunes flying out from Europe to go to SXSW, the Ex showed what is possible with limited budget and a lot of friends, and people who aren’t around for the ride.

But that’s not all playmates! Follow me upstairs to the Spiegel bar, just in time to see Han Bennink and Peter Brötzmann make hot steamy music-love to their instruments in front of a room of Utreg hipsters! And Mark and Michel from Julie Mittens, they’re excused, M’Lud, cos they’re Metal Warriors and sonic groovers. Still, despite the plethora of chinstrokers in the audience, for once, Utreg hipster nonsense couldn’t shake my enjoyment. I’m really going to miss these two; they could soundtrack my day. I want them in my living room, playing their mad, and back-to-front jazz equations as I eat my toast. I want to see Han stick drumsticks in his mouth, I want to see Peter look wearily around before he blows all Hell through his sax, I want their Astral jazz fusion to frighten off the window cleaner when he comes to collect his frankly exorbitant fee for missing half the dirt AND leaving a greasy mark on our large front windows. I want Han Bennink to do that daft thump with his foot, or shout “yeah” every time I brew up. I want to know where to buy trousers like Han Bennink’s trousers. I’m obsessed. They are true greats.

If the beardies in the crowd thought they’d successfully negotiated Bennink and Brötzmann then they were in for a right shock with Fendika. Fendika came and laid waste through their charm, beauty, gentleness and sense of fun. Even the “I like African music and I know loads about it more than you” merchants in the crowd (i.e. the ones who clap with flat palms) were laid out by Fendika’s show. The masenquo sounded soft and pleading in this lovely old bar, and the invocation at the beginning of the gig was pure magic. The girl singer was on one tonight too; cracking the sound on, exhorting eth dancers to give it some extra shine. She was like a ringmaster, controlling the rhythm and movement of the room. The ending – where we all got down on the floor and up again, was just utter magic. These are the moments when you just can’t beat live music as a force for the good.

After that (ok, well after a LOT of post festival hugging chatting and babbling) we missed the last train and kept ourselves awake on the dreaded Utrecht- Amsterdam-Leiden-Rotterdam night service, regretting the warmed-up-grease-snack that you always think will be a good way of keeping you awake on the journey (it does, via indigestion) and you always regret. Still, the music was all worth it. Forza The Ex! Floreat the Ex! No sleep till the next gig (in a youth centre near you).