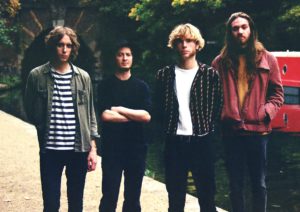 The Eskimo Chain – We Are Subcode
DL
Out now

The Eskimo Chain are based in London, but were formed in beautiful Margate by Luke Spinks, Matthew Mullins, Patrick C Smith and Joseph Flaig.

Their latest single and video is called We Are Subcode and it is the second track off their forthcoming EP recorded by Margo Broom at Hermitage Studios and mastered by Felix Davies at Metropolis. The video is replete with sumptuous homemade psychedelic visuals and fits perfectly to the sound that The Eskimo Chain produce.

There is no slow intro to this song, just pounding drums and a driving guitar riff right from the off. The drawling vocals come in a fit perfectly to the sound the TEC are going for.

Suddenly there are some gorgeous chord changes that you just weren’t expecting and that takes you on an ebbing and flowing shoegazing journey that just makes you want to bloody smile. They remind me of the fabulous Telescopes in their breadth of sound, noise and ethereal vocals.

The track finishes with a nice noisy and psychedelic solo that leads back into a final flourish of the riff and chorus. It’s short, but by God is it sweet.

The Eskimo Chain are currently playing headline shows across London and the South East. They are set to accompany the release with a series of shows across the UK including Karma Fest V in Leeds. They next play The Lock Tavern in Camden on March 10, supporting New York-based Max Pain and the Groovies. They then have their own headline gig at The Lexington, London on 21 April 2017.