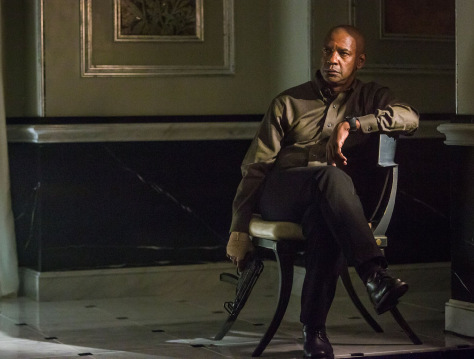 Based around the cult ’80s TV show of the same name, The Equalizer is an immersive thriller starring Denzel Washington, revolving around his relationship to his mundane day to day live, and a seedy underworld. Louder Than War’s Andy Carrington reviews.

I like Denzel Washington. As well as being a very talented actor who immerses himself in the roles he plays, he has tremendous on-screen presence and always seems to come across as a real sound guy. I don’t know him personally — obviously — but whenever Denzel appears in a film, I have a genuine interest in seeing it.

The Equalizer (based on the ’80s TV show) is built around Denzel’s familiar nice-guy-takes-no-shit kind of personality. His character, Robert McCall, is an everyday working man at hardware store, who lives by himself, has a particular routine and helps his friends out when they’re in need. Particularly, his teenage friend Teri (Chloë Grace Moretz), who is badly beaten one night by her pimp — which prompts Robert to visit the Russian mobsters responsible and begin a violent, ongoing war within the sex trafficking underworld.

The Equalizer could’ve easily been titled Man on Fire 2, seen as though the premise is very similar to Tony Scott/Denzel’s revenge thriller from 2004. Rather than focusing solely upon the protection of a young girl, however, this film delves more into the general resistance of Denzel’s character to the mob, and the acts of vigilantism he undergoes to protect himself, his friends and even society as a whole.

At first, I was annoyed to find that the girl disappears throughout the majority of the film’s second part, but then I understood why. The Equalizer is not about simple revenge/the protection of a young girl (like Man On Fire is); the focus is upon McCall being a “normal” kinda guy who desires peace and tranquillity (which is also the reason much of his black ops history is substituted in favour of his “unremarkable” day-to-day lifestyle).

The Equalizer builds with patience, allowing us to become familiar with McCall and his routine; as well as sympathise with his violent methods of defence. He gets the bus back from work every day at the same times, has some food when he gets home, cleans everything up, then takes a book of classic literature and his own tea bag down to the local 24-hour diner. He may seem like a calm, normal bloke, but push him the wrong way and he’s capable of stabbing you through the chin with a corkscrew.

Fuqua spends a fair bit of the time focusing upon Robert’s “uneventful” routine and establishing the world around him. Though rather than waiting around, twiddling our thumbs as we await the next surge of action, the moments involving Robert and his small circle of contacts are genuinely interesting and warrant taking up a large chunk of the film.

Of course it helps that Denzel really sells his character, as well, keeping Robert’s readiness to kill bubbling underneath his charm, till he’s given the opportunity to express his violent capabilities in a number of creative ways. And when I say creative ways, I’m not kidding.

The first action scene is a belter, filled with plenty of stylistic kills; while the ending is pure fantasy (in action terms) that sees Denzel have a whole host of DIY tools at his disposal. His opposite, “Teddy” (played by Marton Csokas), hypes up the intensity of the man-vs-mob rivalry; and there’s a great face-to-face verbal encounter (reminiscent of Pacino and De Niro in Heat) that leaves you anticipating more.

For some reason, there’s a scene involving Bill Pullman and Melissa Leo about three-quarters of the film in that isn’t needed. Pullman and Leo’s characters aren’t that interesting and the film’s pace distracts from the inner-city war and quiet times McCall endures by himself. That said, The Equalizer is a great watch, delivering simple, old-school thrills with plenty of innovative ways to kill bad guys along the way (it’s not often Denzel stars in a bad film, you know).

Pre-order The Equalizer on DVD/Blu Ray here. The original TV series can be bought in its entirety here.