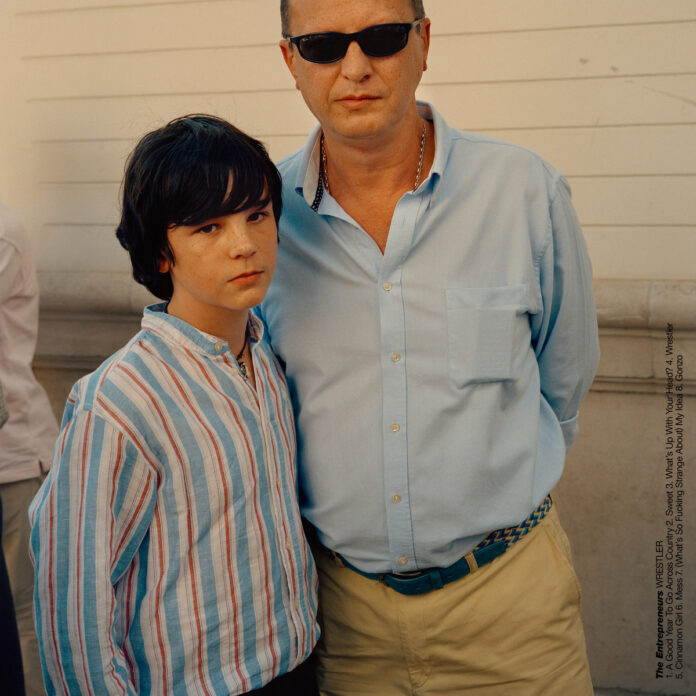 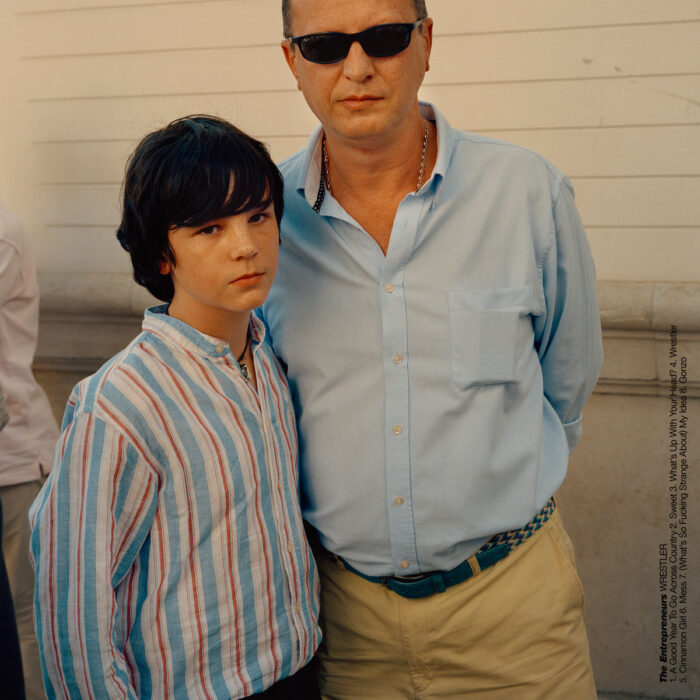 Denmark’s The Entrepreneurs new record, Wrestler, could be the sound of a hundred yesterdays. And as such it’s a release that revels in attitudes that are at once annoying and incredibly addictive. We can enjoy it in our homes for now. I do wonder, mind, if I would have taken any notice of this new LP if I wasn’t under curfew. It really does sound like the moist feckless forms of the freedoms that we can’t – yet – get back.

This is a trickster LP. Wrestler makes you think of many diffuse things often at once, the flotsam of past cultural assumptions, of rock and roll as it most certainly was and as it may never return. Images of the KLF film when they drive their black and white KLF car around the desert keep coming to mind. It’s rootless music, forever operating at a distance prone to disappearing in a heat haze, just as you feel you’ve got everything down pat.

This is a guitar record, first and foremost, nodding to bands who liked guitars, who saw guitars as their third arm, who loved the creamy chocolatey sludge that those combinations of wires, strings, wood bodies, knobs, frets and bars could make. Throughout the guitars rumble and groan like grizzly cubs, or grate and splurt like embers in a fire, or are kept growling, under lock and key, until needed. And, because of that act, the band often allows thick streams of electronic noise to splurt out like rabbits pulled out of hats, as on ‘Sweet’ and ‘What’s Up With Your Head’, where the guitar solos sound like they’re being squeezed hard, splurging skywards out of a tube).

Elsewhere and everyone is everywhere on ‘Wrestler’, messing us up with paths less trodden. You know the ting, invocations of long-forgotten sounds. ‘Mess’ is Mercury Rev back jamming with their old, nuts, singer. The slightly displaced, nasal, dreamlike singing style, and the sonorous plod of the bass, also sometimes reminds me of Poland’s mighty Trupa Trupa (but with a more Western, American attitude soldered on to the sonic bodywork). Sometimes – blame the curfew – the mental images this reviewer receives in this respect border on the hysterical. For example, the singing and overall mood of woozy winsomeness on ‘Cinnamon Girl’ reminds me  – wildly – of Ultra Vivid Scene, an Ultra Vivid Scene, that is, who championed plaid shirts and mucky sneakers. The spirit of Todd Rundgren is also definitely present, maybe in the record’s way of splicing a strong pop sensibility with proggy, cut ups and psyched-out soul. The title track is a great example of a Nazz record slowly melting on the roadside. I’m sure many will find their own sonic Fata Morgana. In fact the morose plod of ‘Wrestler’ is the one moment where we listeners could find a way behind the brass, smiling mask of otherness the band presents. But it’s difficult to get much of a grip as the song’s message, foggy, obtuse, metaphorical, has a habit of melting away in the heat of a pedal haze. Is it actually worth knowing anyway?

Is this message actually worth knowing anyway?  In our permapresent, where we doom scroll through death tolls, it comes almost as a shock to hear a record that feels utterly carefree or adrift from the cares of the world. Even if it’s one that maybe hasn’t changed it’s kecks in a week. The titles take the piss a bit, too; is it really ‘A Good Year to Go Across Country’? And the almost infantile drops (as on ‘Sweet’ and ‘Cinnamon Girl’) all those restarts and asides, where all we are left with is a steady beat and the high-whine of the vocal, often feel deliberately mocking, again, reminding us all of a time when we could afford to be wasteful with our attitudes and emotions.

Best is left to the end. ‘(What’s So Fucking Strange About) My Idea’ is – its seems – when the band wakes up and has a word with you, the listener. It’s a great challenge, from the growl of the bass to the lazerbeamed guitar lines that feel like they’ve also been radiated. The song seems to talk about going on a Bonnie & Clyde jaunt and is such a moronic challenge to our current, static arses. The last track, the Odyssean ‘Gonzo’ sounds exactly like the title. A psychedelic mess with filmic flashbacks, it’s the sound of someone walking paint into your carpet and pouring themselves a drink.