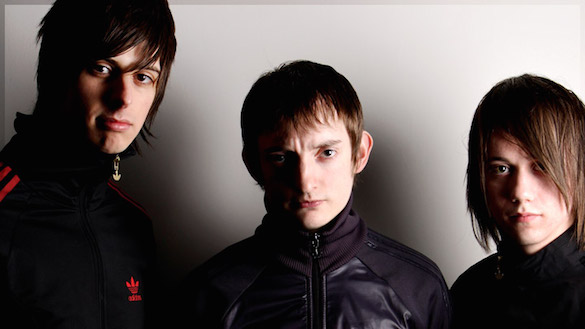 In a time when British Indie is being led by the likes of Peace and Bombay Bicycle Club, Rock ‘n’ Roll survivors the Enemy offer ballsy, no-nonsense guitar music, seven years since the trio found their way out of Coventry. Louder Than War’s Josh Norcliffe caught the band live in Leeds last week – check out his review below.

Tonight, supported by the Tea Street Band from Liverpool, Tom Clarke and co played an old-school set as they combined memorable covers with adrenaline-fuelled anthems from their impressive back catalogue.

They caused a frenzy almost immediately, as they delivered first album tracks It’s Not OK, Had Enough and Aggro with Clarke’s almighty declaration, “Call the police!” – not bad from Clarke who admitted he had chronic man flu. “My throat is rapidly becoming fucked”. It couldn’t stop the Cov band though, who rattled through songs from their second and third albums (Music for the People and Streets in the Sky) including Gimme The Sign, Saturday and footie anthem Be Somebody, in which there was hardly time for breath for both band and crowd.

If it’s surprising that the Enemy no longer have to incorporate lesser-known ‘album tracks’ into their sets, it’s maybe more surprising that they choose not to promote new tracks Melody and Magic which are certain to be live favourites. The band also performed a special trio of covers including the Verve’s The Drugs Don’t Work, James’ Sit Down and Blur’s Tender.

As the Coventry band continue on their intimate tour of the UK you get a clear sense of what the Enemy are all about, and although they may have lost their way in terms of album sales and chart positions, they never forgot what’s important to them; a love for the music they make and a passion for their adoring fans.