The BBC have announced the end of their TV text service. From Ceefax to Teletext, this is the end of a source of information that shaped what we knew about culture and the form the internet now takes. Dave Beer mourns a sad loss to our culture.

It may seem archaic but before we finally bid farewell to TV text updates on everything from football results to news headlines and cheap holidays, perhaps we should pause to reflect upon the end of that first digital era – and ponder what we might miss.

Occasionally, after school, I’d switch on the TV, press the TV text button on the remote control and play the quiz Bamboozle. Played through Channel 4’s TV Teletext, you had to get each question correct to be able to move to the next. Get all 12 correct, either by knowing or memorising the answers, and you would receive a message of success from the quiz master. At the end it asked how many you’d got right first time, and give you a little summary of your skill levels based on your performance. Get a question wrong and it would return you back to the start. It was slow and basic, but these were only the very early experiences of mass interactive media.

Television text, in the form of Ceefax and Teletext,  provided information directly to the viewer. The TV was transformed into a two way street, the viewer could choose what they wanted to find out and when. Clearly a precursor of the internet, TV text provided pages and pages of information on all sorts of topics. It was crude compared to the internet sources we use today, but it served to pave the way for the info-deluge that has followed. 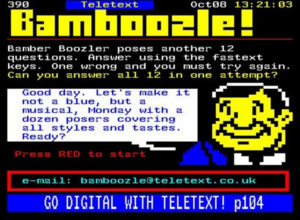 The music news and charts pages was another regular haunt. For your favourite bits you’d have instant recall of the the three digit number that needed to be dialled in to take you directly to that topic – allowing you to bypass working through the index pages. When you arrived at your destination, you often had to wait for the pages to flick back to the page one. The charts were spread over several pages and each appeared on the screen for a few seconds. If you missed the bit of information you were after, you would then have to wait for the pages to flick all the way back through to the one you were after.

I seem to recall there being holiday deals advertised on there. Because of the volume of cheap offers available, these were spread over dozens of pages – miss the holiday you were after and you would need to wait several minutes for it to work its way back through the full loop.

The music reviews and sports team updates were like this too. You’d often get half way down the page and then have to wait until that page reappeared so that you could read the bottom half. It didn’t seem a problem, there was no real rush. At the time it was, after all, really the only place for free music and sports news and charts beyond waiting for that sort of thing to come along on a radio broadcast. There was even what at the time seemed an impressive option to have the live football scores on the bottom of the page as you watched whatever was on telly. The text services were pretty useful as an extra source of music information. In a pre-internet era the Ceefax and Teletext services provided an interactive window onto the world. It gave access to information when it was required. It was important in that respect, even though it seems limited, slow and archaic now. 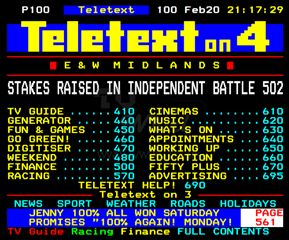 This is all now stumbling to an inevitable conclusion. It has lurched along for a while but the numbers have long been up.

The BBC’s announcement that it is closing the text service on its red button platform marks the end of TV text services. Its Ceefax text service was originally launched in 1974, although not all TVs were able to access it until some years later. Its usage peaked in the 1990s. That Nineties peak – they estimate 20 million people used Ceefax at least once a week – was probably largely a product of people checking to see if they had won the lottery. Ceefax closed in 2012 and the text service continued on the BBCs red button options. In early 2020, that text service will also cease to be provided. It seems there is a little cause for Teletext, Ceefax and TV text services where we are surrounded by all these other devices.

I still use the TV text service. It still provides me with regular information. There is no call for it, but I find I still reach for the remote to check sport news and scores, showbiz news and other headlines. More out of habit than necessity, or maybe I’m trying to preserve something. TV text services were somehow more manageable, more organised and more digestible. One day in the near future I’ll press the red button to check on something and it will no longer be there. It’s not really much of a loss, there are much more rapid ways to get much more detail, yet there will still be a feeling that something important has shifted.

Words by Dave Beer. His new book is The Quirks of Digital Culture. He is on Twitter and more information about his writing can be found on his website.