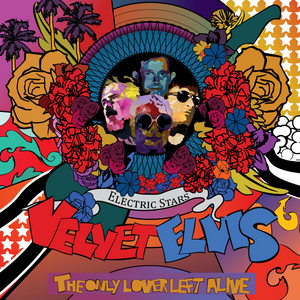 With the full title of Velvet Elvis The Only Lover Left Alive, here is the new album by Mancunian mod/psych outfit The Electric Stars. This is the follow-up to 2012’s Sonic Candy Soul, which came out on the Detour label… Ian Canty has a date with the king…

Manchester mod/psych band The Electric Stars originally came together back in 2011. Vocalist Jason Edge was joined by Andy Bee on guitar, bass player Keith and a session drummer to cut their debut album Sonic Candy Soul a year later. Soon after its release on the very excellent Detour imprint, they found Johnny to fill the gap behind the traps and also added second guitarist Damian. They made slow but steady progress through the years, releasing four more singles for Detour and its offshoots, but people alerted to their potential by that first album have had to wait to this year for the new Electric Stars collection, Velvet Elvis The Only Lover Left Alive.

Released on the Stoned Gospel Records (also home to Turner’s recent and excellent LP Daydreams And Stars, read about that here), on Velvet Elvis they use the influences many mod/psychedelic acts take as a starting point like The Small Faces, The Byrds and The Rolling Stones, but crucially equip their work with their own stamp. Whilst not actually a concept record per se, the songs all link and also give a sense of consistency with Sonic Candy Soul.

The opening nine minute opus of a title track serves as a primer for anyone new to The Electric Stars’ own peculiar style. An organ drone hovers in the air, with the guitar soloing in a bluesy fashion, before another sound emerges. This kind of put me in mind of the theme from the Budgie TV series, but a shuffling dance beat soon takes up the baton. Though the pronunciation of the word politicians is a bit iffy (think Anarchy In The UK antichrist/anarchist), otherwise this guitar-led groove is bright and enchanting. There is a passing similarity to Sympathy For The Devil, but the guitar work, energy and a cool drop out to just piano and voice, all help manage to steer it away from a mere homage.

Electric Stardust is more concise and full of fresh, handclapping charm. This is just a great, memorable pop number really. It finishes with a sitar coda, leading us onto Sunshine, another punchy piece of psych-flecked rock. The acoustic drive of Pop Star positively motors with a Faces-style abandon and the lyric sharply parodies TV talent shows. A spacy, glam-style reflection called Suicide then takes the tempo down a notch gracefully.

Samples of the sea’s crashing waves brings us to Everything Everyone, some fine keyboard work on this one again, in fact the playing is expertly judged here. It is gentle and lovely with slight music hall/jazz leanings and Jason’s voice glides over the top elegantly. Precious (not The Jam tune) is a busy acoustic and slide guitar thing, with a pumping piano and some excellent backing vocals too. The album sort of has two title tracks really, with the Velvet Elvis opener being followed at this point by The Only Lover Left Alive. Given the song title’s connection to The Rolling Stones (from the ill-fated 1966 documentary of a very similar name), the presence of rock-solid guitar riffing and an ace rhythm section sound are a given. But the sheer hard-hitting euphoria of the chorus is all The Electric Stars’ own.

The more pared down music employed on Loaded With Regrets is made more effective by following on from the previous offering’s raucousness. Acoustic and electric guitars combine with some excellent singing on what is one of the LP’s big ballads, apart from the noisy conclusion. I Left My Soul Out In The Rain makes its case in a catchy fashion and the tearaway rock & roll momentum of We Love You (no not that one!) is positively thrilling. Last track Impossible Odds (Rock N Roll Saved Me) provides the LP with a suitably epic finale, placing the notions of redemption and enjoying one’s time on this planet to the full to the centre of the song’s narrative.

On Velvet Elvis The Only Lover Left Alive The Electric Stars successfully plug into the world of post-psychedelic UK pop/rock of the late 1960s/early 1970s, without ever coming across like a pastiche. There is an obvious love for the music of that time and a feel for what still cuts the mustard in 2021. They also often enough hit on the kind of authentic Stones swagger that Bobby Gillespie would no doubt trade the family silver to get anywhere near, but they never launch into any kind of Mick Jagger impression.

In doing all this, they furnish us with some great modern pop tunes blessed with bright musical moves into the bargain. To put it simply, Velvet Elvis is a hugely enjoyable collection that takes 1960s influences and moulds them into attractive and new sounds in a really endearing manner. Let us hope that they don’t take quite so much time in putting together their third long player, because Velvet Elvis is a whole heap of fun.