Home Books UK Book Reviews The Electric Muse Revisited: The Story of Folk into Rock and Beyond... 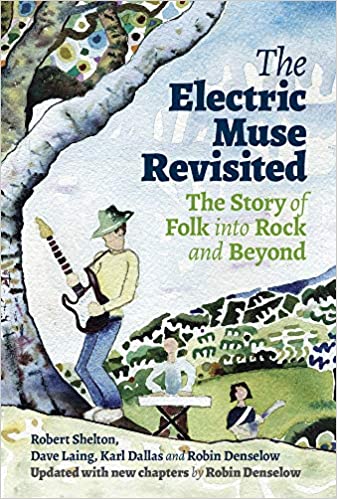 (The Story of Folk into Rock and Beyond) by Robert Shelton, Dave Laing, Karl Dallas & Robin Denselow

Who Knows Where The Time Goes?

The Electric Muse first came out in 1975, so an update is certainly well due. Hopefully, this very enjoyable and informative book will convince any doubters that the genre is still alive and developing further as always. Since then there has been Rob Young’s superb “Electric Eden: Unearthing Britain’s Visionary Music in 2011, which took a very wide-ranging and imaginative view, with a distinctly Wyrd/Wicker Man vibe as an added twist.

This new edition doesn’t have quite such a wide-ranging perspective, but the two parts – original text and new/updated material – work really well together in looking at the past, present and future.

First off, though – what is Folk music? One of the key elements in the story told in “The Electric Muse” are the different perspectives on this and the factions who promote them. Basically, we’re talking about the Traditionalists – who tended to be pretty purist hardcore about what material is sufficiently proven to be in the “Trad. Arr.” Category, what instruments are allowed, and how they should be sung. Next up, the Revivalists aren’t quite so intense but basically come from the same place, though with an emphasis on rediscovering & reviving old material. And then there are the Innovators, who see Folk not only as an ongoing form but also take a global perspective, rather than the narrowly British scope of the Trad brigade.

But in these terms, “Folk” is basically a convenient term for any mainly acoustic-based music, whether the songs are written by the singer or traditional. When the music first started to really take off in the late ’60s, artists like Donovan, Roy Harper, Al Stewart and the Incredible String Band for example (or Tim Buckley, Leonard Cohen and Joni Mitchell across the Atlantic) weren’t really much about folk at all, but folk clubs provided a rare outlet for their type of music (until the promoters caught up, of course).

An early chapter analyses the American folk revival of the late ’50s, noting in passing how the dead hand of the BBC and the “performer’s rights” closed shop meant that musical trends nearly always started in the US before filtering their way to the UK. Peter Paul & Mary are a good example, combining various forms like Bluegrass, Blues and Country influences, to have a series of huge hits, although often the end results leant too far to the bland pop side of acts like the New Christy Minstrels. Equally, songs like “Where Have All the Flowers Gone?” underlined the symbiosis between the folk scene and the rapidly growing 60’s protest movement.

Indeed, the foundations of the Folk Rock scene are decidedly American, with huge key events like Dylan going electric and the massive pop success of groups like the Byrds covering Dylan songs. The perspective of this book is decidedly “Brit-centric”
There are some really fascinating chapters on Fairport Convention (my folk rock favourites then and now), and the subsequent careers of two of the main players, Sandy Denny and Richard Thompson (which unfolds further via Linda Thompson). It’s an interesting editorial decision with the original 1975 chapters, whether to update them with what’s happened since or leave them intact? Personally, I’m glad that the publishers resisted the temptation to be wise after the event/second guess the writer – it’s always much more interesting to see what was written about artists/records at the time, before any dreaded critical consensus has been set in stone.

So it’s quite intriguing to look at a couple of the “Crazy British Individualists” pieces – John Martyn, still pretty “niche” in 1975, but only a year or 2 away from “Solid Air”, the album that would propel him out of the folk/rock orbit, or people like the Incredible String Band or Roy Harper, both decidedly “underground” originally, who’d become major players by the mid ’70s, but have gradually faded into the background since then. Equally a few gaps are left unfilled, like Vashti Bunyan’s surprising omission – but these things have always come down to personal taste: I’d have liked more about Michael Chapman, for example, or maybe a bit more recognition of the Trees/Dr Strangely Strange psych/folk explorations.

The second part of the book continues the story very much to the present day. Taking up where Part One left off with eccentrics, it picks up the story with people like Steeleye Span, Richard Thompson and others who’d made it through from the 60’s scene, before continuing the story with chapters on Folk Into Punk, the New Folk Rock, Global Folk, Folk Big Bands, the Return of the Electric Guitar, And Next, before bringing us up to the present day with a stark assessment of the post-Covid world, and its that was to devastating effect on music of all sorts. My awareness of what’s “new” on the scene only goes up to Seth Lakeman and the Rails, so it’s great to be pointed in the direction of artists like Sam Lee. But of course, as we know now, something was a-lurking around the corner in 1975, well beyond the ken of most folk fans – Punk Rock! Oh how we sneered at the “wimps in woolly sweaters”. As time went on though people like Billy Bragg challenged this orthodoxy, emphasizing the DIY/lo-fi aspects of the music and rediscovering how so much of it was the real rebel music of its time, before being censored into blandness. The Pogues briefly demonstrated how to combine old and new folk values with a tune to die for and a serious political edge as well.

There’s a fascinating section on the Global Village project, initiated by Simon ‘Afro Celt Soundsystem Sommerton’, largely inspired it turns out by Joe Strummer wanting to know why UK folk singers would roll over for anything “authentically American” but didn’t pay much attention to their own roots music. Interesting too to read about some of the disagreements that arose over ‘authenticity’ versus innovation.

So hopefully the old real ale and shaggy pullover clichés about folk music are long gone now. The breadth of styles and artists discussed in the book show the vibrancy and adaptability of the form, now with half a century behind it. You won’t find Coil or many of the more far out acts from “Electric Eden” here, but no matter, I’ve got a mass of other leads to follow from here.

You can buy the book here: or at any other book outlets

Robin Denselow has written about folk, world and rock music for The Guardian and other publications, and worked as a reporter and producer for BBC TV and radio, covering politics and music. He is the author of When the Music’s Over: The Story of Political Pop.

Karl Dallas was a regular contributor to Melody Maker and other publications and was the author of three books, including Singers of an Empty Day. He died in 2016.

Dave Laing was editor of Let It Rock magazine, author of Buddy Holly, The Sound of Our Time, Hail Rock’n’Roll, and a trustee of the folk music charity Square Roots Productions. He died in 2019.

Robert Shelton was folk, rock and country critic for The New York Times and a regular music reviewer for The Times. He wrote five books including The Country Music Story, the biography of Josh White, and edited Woody Guthrie’s
Born to Win. He died in 1995.