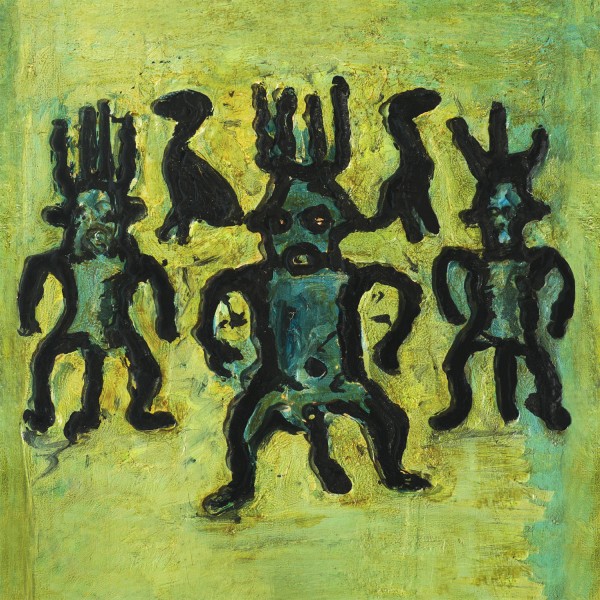 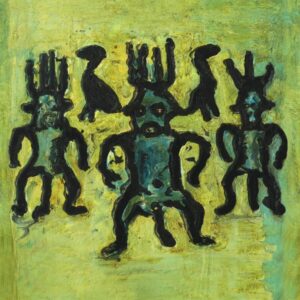 The Dwarfs of East Agouza channel Egyptian vibes into pulsing psych-folk jams. Get on board, says Louder Than War’s Paul Margree.

Ex-Sun City Girl Alan Bishop’s latest project, in which he’s teamed up with Cairo-based sound-stitcher Maurice Louca and roaming Canadian-Egyptian composer Sam Shalabi, is a set of jaunty, trippy jams that take sonic compass readings from all over north Africa and meld them into a hazy, onward chug. Tracks such the album’s opener, Baka of the Future, nudge clattering swirls of hand-drums up against busy guitar lines, with Bishop’s tough, insistent bass bringing things together. The result is a set of repetitive grooves that reverberate with the trippy, outsider rock stylings of  the Sun City Girls seminal Torch of the Mystics album, but that are a whole lot less annoying than much the standard trip-rock Deadhead mantras that followed in its wake.

The trio laid down three days of loose, exploratory improvisations in 2014 then mixed them into the tracks that form Bes at a session in Montreal last July. Spread over double vinyl/CD, there’s plenty room for the trio’s playing to stretch out, with layers of acoustic, electric and electronic instrumentation making for a tasty stew. The shimmering dread of Resinance, reminiscent of the crowded urban hustle of Louca’s Benhayyi Al-Baghbaghan (Salute the Parrot) album, is a spooky, dusty highlight, while Clean Shahin slows down the pace, its moody atmospherics the kind of vibe that Massive Attack probably should have explored more of in their Mezzanine album.

The album has an endearingly hybrid quality, grabbing stuff from all sorts of folk traditions as well as the kosmische throb of underground rock. You’d expect this, I guess – all three of the Dwarfs (Dwarves?) have spent their careers mixing and merging traditional sounds with western sonic tropes. Louca’s solo work often focuses on field recordings, from Cairo and elsewhere, processing them into thick washes of electronic sound. Shalabi regularly criss-crosses from his Montreal base to Cairo, playing in cross-genre outfits like Land of Kush and The Shalabi Effect. And of course, Bishop co-curates the Sublime Frequencies label, among his other activities, an outfit that’s been one of the prime movers in reimagining the previously maligned world music genre, opening western audiences to an atlas full of brain-flaying musical traditions.

Which all means there’s plenty going on here. The mighty, 35-minute Museum of Stranglers  in particular has enough going on to constitute a release in its own right, its hazy opening section of buzzing horns and circling guitar motifs kicking off  into a looping polyrhythmic rush, before breaking down in a squall of hooting drones. But that’s only the first half of the track – in the remaining quarter of an hour, the trio gradually bring the individual sonic shards back together, the pieces coalescing slowly into a deep, jazzy workout that push out from Egypt into deep space, bringing to mind the sci-fi clarion calls of Heliocentric Worlds-era Sun Ra.

By contrast, Where’s Turbo is the flipside,  stripped-down slice of ethno-funk that’s off like a prize nag in the Grand National, its head down and never deviating from its course for another 16 minutes or so. The tangled copper-wire guitar lines and delicate synth embellishments are driven forward by frenetic percussion like a hopped-up Talking Heads stranded in Tangier in the middle of the Remain in Light sessions.

While there are more ideas at work in Bes’s individual tracks than most bands would cover in their careers, the trio never let intellect get in the way of good grooves. The name, after all, comes from an Egyptian deity whose sole reason for being seems to be to ladle out good vibes. It’s tripped out, for sure, but Bes is also taut, hip-shakingly brilliant stuff.