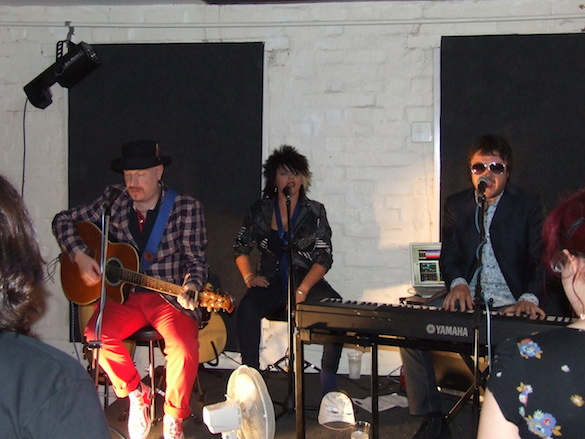 Still in with a shot at my choice for Album Of The Year for Bleak Strategies (Louder Than War review here), The Dowling Poole bring their majestic brand of psychedelic pop tunes to the deserted streets of Rushden.

Bad news for you; you weren’t there, were you? Good news for me; it’s a 20 minute drive from my door. Result! And, trust me, flip all happens in Rushden, so this is a big deal.

The White Rooms is essentially a rehearsal room, occasionally used to put on intimate gigs. Pretty much a big lounge, much like their previous gig at The 12 Bar Club but it works well for the select crowd tonight. It’s cosy, but everyone can see the stage. It’s refreshing to see that people have travelled here on a Thursday night, safe in the knowledge that they will experience a beautiful album with a dose of surreal humour.

Firstly though, a mention to acoustic support tonight from Dave Earl, a.k.a The Attempt. Simple songs, played with passion and humour. He overcame some technical glitches and held the audiences’ attention. A natural, unaffected voice made for an enjoyable set. 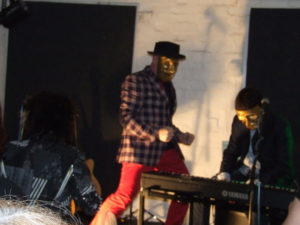 There’d been talk of a full band for these dates, but as before it remains Jon Poole, Willie Dowling and Givvi Flynn, which works perfectly. Their respective talents manage to transfer these dense songs to an acoustic setting.

This time round, they start with extra track for Pledgers Straw Man, concerning the Savile monstrosity and all the media circus it entails. Cheery enough for you? It’s a cracking, powerful song.

A Kiss On The Ocea’ is Jon’s ode to narcissism, complete with jolly singalong chorus. Only he could make this sound like a celebratory thing.

They aren’t short of big choruses. Saving It All For A Saturday has everyone singing in a Chas and Dave style. See what you missed? Hey Stranger is Jon’s sweet tribute to mentor/mate/Cardiacs genius (for once it’s deserved) Tim Smith. Jon urges us not to be sad; it’s not a sad song, but the combination of Jon and Willie makes it a bittersweet melody.

Jon treats us to his own Mundane And Beautiful from The God Damn Whores‘ Heya-Heya album, so I am now very happy. Empires, Buildings And Acquisitions flicks the vees at the odious Donald Trump’s endless ego via another huge TUNE, followed by Paper, Scissors, Stone then they dust down Jackdaw 4’s This Is Your Life, Givvi taking lead vocal this time. Willie’s right; she does it better. No offence!

More than this though, if you have the common sense to see The Dowling Poole live, you get a unique experience. Jon’s surreal humour/outbursts/contemporary dance combined with Willie’s dour tips/rants. Over time, it becomes a shared joke. It feels like you’re among friends. Very odd ones, but friends all the same. We are a little community. Givvi must be very patient.

Speaking of patience, during the gorgeous Clean someone answers their phone and proceeds to chat. Just as I’m thinking “turn it off!”, the band stop dead and stare at the culprit. Willie handles it perfectly, far kinder than I’d be. The sheepish fellow leaves the room, returning with a beer for Givvi. Nicely done, without spoiling the atmos. For future reference people, if you’re at a gig, anywhere, LISTEN! If you want to chat, go to the pub; you are the bane of my life. No excuses.

Rather than doing the encore schtick, they stay onstage and announce the encore. Unemployment Man, which Jon wrote when he was 11, gets an airing as does Jackdaw 4’s Why Don’t You Come And See Me?. Brief irritation aside, it’s been a great, memorable night. Do yourself a favour and invest in Bleak Strategies. Treat your ears. Once again, a big thank you to Jon, Willie and Givvi.

All words and pictures by Martin Haslam. More work by Martin can be found in his Louder Than War archive.