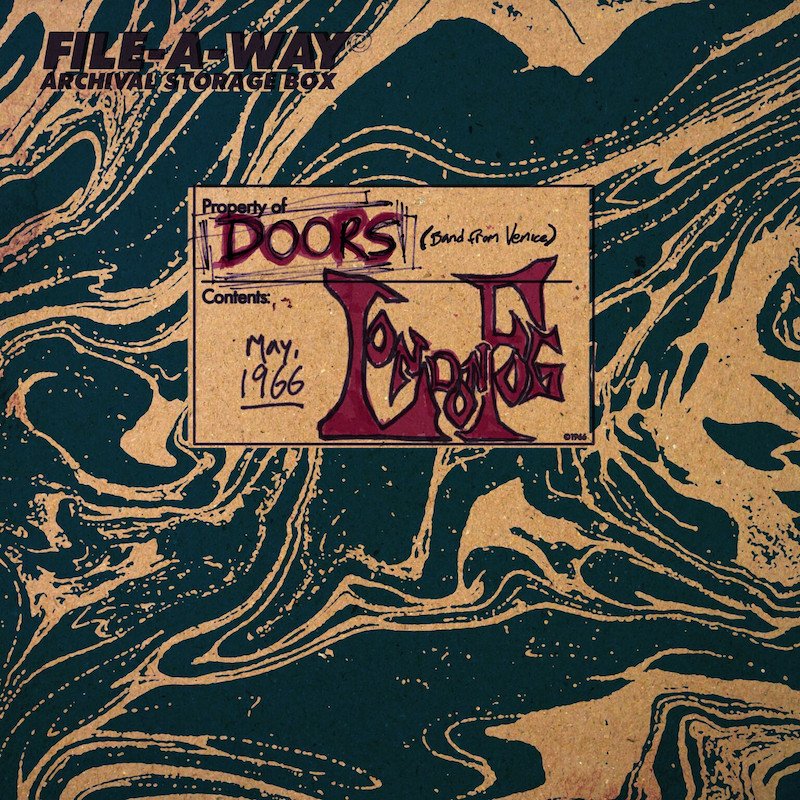 Early live recording of the pre-Elektra Doors, presented in a box with rare photos and memorabilia…LTW’s Ian Canty stays the night at the Morrison Hotel when it was just a humble B and B….

The Doors occupy a strange, constantly shifting position in the Rock firmament, feted by many, hated by some and fliting in and out of favour with the music media all the time. Jim Morrison is thought of as either a hugely self-indulgent sign of Rock n Roll sloth or the precursor of Iggy Pop and thereby Punk Rock, dependent on the mood of the times. My view is….well they did make some appealing records, along with, I’ll have to be honest, a fair amount of stodge.

We will have to cut to the chase with regard to this review as all the various ephemera that comes with the full release was not made available to me at the time of writing. All I have to go on is a CD with the seven tracks that also feature on the 10″ inch vinyl record that accompanies it, so that is what we must focus on. Apparently the London Fog was a low rent venue on Sunset Strip where the Doors had a standing engagement in the Winter of 1966, seemingly an establishment pretty downmarket in comparison to the “hip and happening” Whisky-A-Go-Go. The name of the club itself obviously had airs and graces towards Swinging London, which was just about to be usurped in terms of modernity by the home-grown Haight Asbury Hippy set.

The Doors (as they are represented here) at this point in their existence sound as though they were still in the thrall of the sound of the British Invasion and more specifically the Rhythm and Blues end of it. Concurrently to the rapid development from Beat and Mod into something more trippy that would retrospectively be termed “Freakbeat”, a back to basics Blues scene also prospered with John Mayall’s Bluesbreakers (with “God” in waiting Eric Clapton on lead guitar) at the forefront. Though sharing something of that milieu’s feel Morrison and his crew were more akin to a band whose high water-mark had been a year or two previously. Yes Jimbo did look to his namesake Van’s Them for a bit of inspiration (the version of “Please Don’t Go” here is exhibit A), but Eric Burdon’s Animals clearly provide the main template for the 1966 edition of his band. In addition to Morrison’s R n B holler fitting the bill, Ray Manzarek’s keyboards closely follow in the footsteps of Alan Price’s circa “House Of The Rising Sun” and they shadow Newcastle’s likely lads (sorry) when not occasionally evoking the Seeds, whose “Pushin’ Too Hard” was a big noise around the time of recording too and who also had the same instrumental set up as the Doors.

The plain fact is that this release is aimed squarely at the rabid Doors fan with more than a few quid to spend – it would be the work of a blithering idiot to present this to anyone new to the band and expect them to be converted by it (or indeed stump up the entrance fee), but that is not to say there isn’t anything to recommend about the music on show. It is a reasonably clear live recording of an emergent band searching around for their own identity, sometimes closing in on it in a stumbling around sort of way but needing also at the same time to entertain the “not-quite in-crowd” who couldn’t get into the trendier clubs and wanted to them to play something they knew so they could dance. Occasionally they hit upon something which point the way to their destiny, like the early takes of “Strange Days” or “You Make Me Real” but for the most part they rely on spirited attempts at Rock and Blues standards to divert the gathering. This recording certainly does qualify as a “find”, but in all honesty this set is more likely to be prized as an historical document rather than anything else.

It is very difficult for me to fully recommend this however as the cost seems to be quite a lot for some okay but not remarkable music, regardless of the presentation (which I can’t really comment on, but looks nice from the photos). Taking a pragmatic viewpoint of a fair-weather Doors fan such as myself, the music contained probably is roundabout as worthwhile as any standard price music release of their live recordings. The other stuff (a poster, rare photographs, a London Fog coaster, a set-list written by John Densmore and a programme for the Royce Hall UCLA screening) that accompanies the music will have to swing it big time for you to want to purchase, unless you have deep pockets.