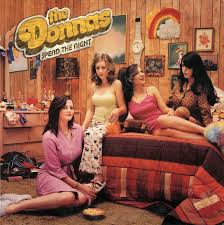 2002 Atlantic Records debut for US Punk-Pop-Glam Rockers the Donnas, re-issued with five bonus tracks……LTW’s Ian Canty kicks himself square in the nads for missing out the first time round…..

It’s a heart-warming tale with a high-octane musical payoff: The Donnas, four school friends from Palo Alto California who started the band when they were 14 years old, sticking together all the way through, all the while booting huge quantities of bottom with their Glam Punk mayhem. Just how it should be really. Going through a couple of name changes (including a spell of time as the Electrocutes) they arrived at the Donnas name and each band member assumed “Donna” as their sobriquet whilst only adding their surname initial as a means to identification. In the early days they specialised in a more Garage Punk approach, but nine years down the line on their fifth actual album (but first one on the Atlantic major label as opposed to their independently released forerunners) they were pursuing a much more Punk/Hard Rock direction, whilst keeping the melodic Pop smarts that they began with all the way back in 1993.

The Donnas were all born in 1979 meaning that they missed out on all the sort of “you can’t do that, it’s not Punk Rock” stuff with regard to musical content. Which is can only be good news for us because it meant whereas back then people were reticent to mix things up particularly with regard to Punk and Metal, the Donnas motor straight through any stop signs in their pursuit of the Rockin’ goods with no regard for ifs, buts and “you probably shouldn’t do thats”. Of course this can go horribly wrong, but thankfully the full-force, non-stop attitude of speed and precision of the Donnas means that by ramming Punk, Power Pop and Metal together they somehow came up with the perfect mix. I have to admit that I missed this record at the time, but on review thirteen years later, certainly few bands on their fifth album sound as full of beans as the Donnas do here.

In fact it’s difficult to write a lot about this record because it is by its very nature short, sharp and snappy and as such made to be enjoyed rather than mused upon. “Spend The Night” can be summed up in relatively few words. High quality, freewheeling Rock ‘n’ Roll will do at a pinch. Strap yourself in, because there’s no let up on this platter, no ballads or chill-outs (and you better have visited the lavvy beforehand because they won’t be stopping). In fact this is the anti-chill out music and all the better for it in its gung-ho, chaos-inducing glory. “Take It Off” gives Giuda a run for their Glam Stomping money ten years beforehand and “Pass It Around” is the Pistols “Did You No Wrong” hijacked by Slade and delightfully sarky cheerleader chants. “I Don’t Care” manages to mix up AC/DC and ZZ Top with a peerless Bubblegum hook-line and as to prove that it’s not all heads down mindless boogie by any means, they pen the ultimate “well you’re dumped” song in the cool “Not The One”. “Who Invited You” is a Pop classic by anyone’s standards and it all finishes in epic fashion with the MC5/Stooges guitar wig-out on “5 O’Clock In The Morning” at which time I think the Donnas are probably only just getting started, if this LP is anything to go by.

“Spend The Night” was the Donnas most successful record seeing chart action in both their homeland and the UK and it’s not too hard to see why. It is a clear blast of sweat-stained but beautiful sonic energy which never lets up and is chock full of memorable tunes. “I wanna party whenever I want” is a line from one of the bonus tracks, the Ramones-style “Rock ‘n’ Roll Machine” and with this record, you can!