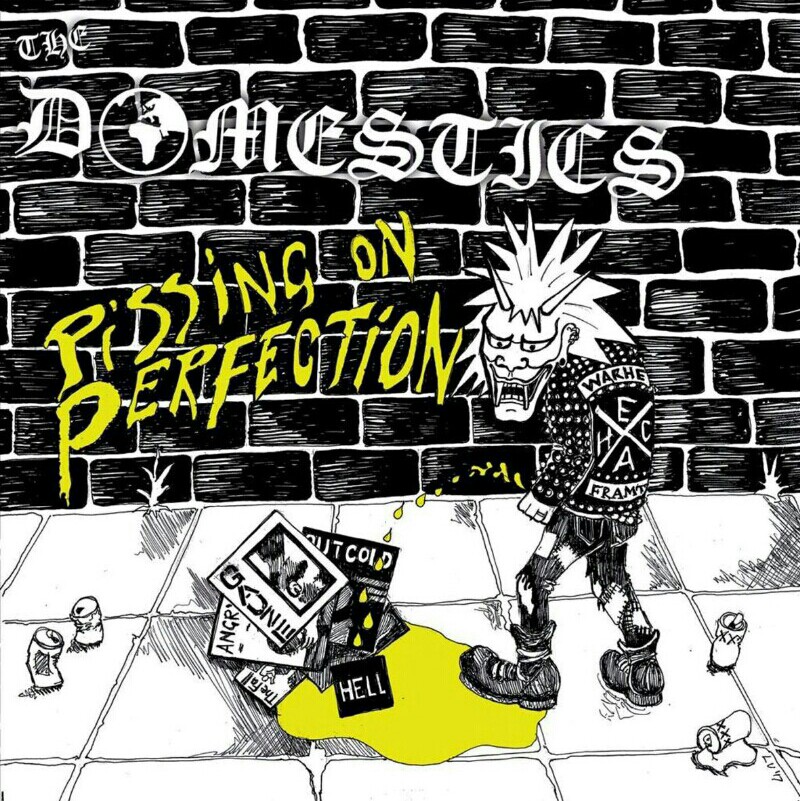 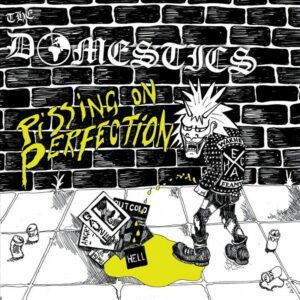 You know when a zine writer asks a band for their 6 favourite songs? This is The Domestics’ response – they nipped in the studio and recorded them. Their selection of songs are chewed up and spat out – masticated and Domesticated you might say – in the band’s now recognisable East Anglian “2 fingers in the air” punk rock fashion. Part Restarts, part Ripcord, all hardcore.

What more can be said? There’s some hardcore punk classics in there. Gauze’s “Distort Japan”, Rudimentary Peni’s “Nothing But a Nightmare” (which segues into a song by The 5 String Drop Out Band, a local Essex outfit, fully explained in the liner notes), “Lights Out” by Angry Samoans (also covered by the Spermbirds back in the 80s) and Out Cold’s “Pull The Trigger” – a band singer James declares as “criminally underrated” in his liner notes. They also lob in a curveball, a song by The Fall (“City Hobgoblins”).  It’s all very tongue in cheek, with the EP title “Pissing on Perfection” paying homage to the originals (perfection) entwined with a bit of self deprecation – “What the fuck have we done to our favorite songs?!”.  And while the cover shows a punk avatar pissing on said records, it’s fair to say they haven’t done that bad a job!

Some will love this, some may not. As the band make clear on the inside of the gatefold sleeve, this record should be taken in the spirit it is intended – not too seriously.  They’ve even taken the piss take as far as the pressing – clear vinyl with yellow splatter, or should that be piss stains?

If you’re not overly keen on cover versions or you want to hear what the Domestics are capable of with their own songs check out the recent LP “Cherry Blossom Life” – reviewed here.

This is a multi-label release brought to you by Kibou, Imminent Destruction, Mangel Wax, TNS, Urinal Vinyl, Sickweirdrecords.

Words by Nathan Brown. You can read more from Nathan on LTW here.