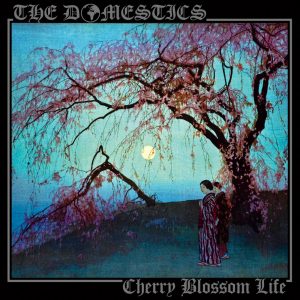 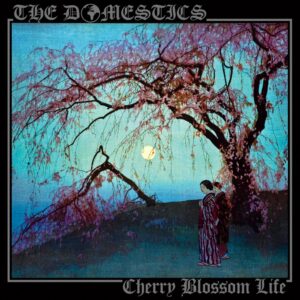 The third album from East Anglian hardcore outfit The Domestics delivers up more breakneck hardcore with a side order of sushi.

The Domestics are incredibly prolific and every few months they knock out yet another new record.  This time it’s a full length, 12 inch diameter slab of vinyl.  The cover art and title – a classic Japanese style image of serenity from 1926 – could mislead the uninitiated, who might zip past it.  Then again, the nature of the way news about music travels now has changed so much that people generally know if they want to buy the record before they’ve seen the cover, rather than the old days when the cover needed to signal interest in a particular type of listener.  Which is great as it gives bands the opportunity to break away from generic design concepts.

Don’t be fooled by the art! Relaxation is not on the cards for you, sucker.  As the needle hits the deck a mid-tempo heavyweight bass, thumping drums and feedback build up to provide something of a Conflict sound, pleasantly building up, until…”Fuck You!”…The Domestics hit the gas and accelerate into their own brand of speedy punk rock.  In a previous review for this ‘ere journal I described them as “Snotty, obnoxious punk rock played at amphetamine speed with a part two-fingers in the air, part political message”.  Maybe a bit faster, maybe a bit more sweary, this is more of the same only more so!

2 fingers leering, shouting at the top of their Estuary English voices, they ain’t got time to fuck around.   Only one song makes it over 2 minutes, and that extra 7 seconds is all fade out. I guess with a title like Stalinist Purge it deserved the gravitas of a full 2 minutes.  BTW it’s no history lesson, it’s a song about cutting negative folks out of your life…Other subject matters include destructive capitalism, consumerist society, hateful journalists and modern slavery.   Plus a general pissed off at the world “Fuck You”.  Anger and street politics mix with occasional academic concepts, and although I may be wrong, I reckon they could be the first punk band to slip “denouement” into a bilious outpouring.

These chaps are most definitely hard to the core. As the cover art and some of the song references make it patently obvious, they love Japanese culture, and the whole 80s “Japcore” sound is obviously an influence.  But if I had to pin it down, I’d still say this was a classic British noisy punk rock style record. If you like studs, spikes, black t-shirts and swearing you’ll be happy.  Every time I listen to it I keep getting transported back to Chaos UK from the Earslaughter split LP with ENT and when I first heard the Restarts early singles.  Nothing fancy needed here, it’s stripped right back and sped right up.  Loud, noisy and angry with the odd squeally guitar solo chucked in.  The swear tin is overflowing and there’s grunts and bleeeurrghs aplenty.  It’s difficult to pick out a stand out song as this works as a whole album.  Among the 16 songs, there are a couple of departures from the warp factor 9 delivery: Human Ikizukuri is a thuggish and bleak poem.  Ikizukuri is a form of sushi that involves dissecting & eating fish while they are still alive.  A nasty culinary practice but a top analogy for modern life – we are human sushi being eaten alive.  Tell me they’re wrong!  Then there is the closing track ,Happy.  A psycho killer melancholy piano with robotic intoned words, it sounds like Moby meets Blade Runner.  Another hidden sushi reference?

The lyric sheet gives you the lowdown on what they are shouting so angrily and sets out their stall pretty clearly in large lettering:  “Stay Punk. Stay DIY. Nazi punks – fuck off”.  Which side of the fence are you on? I’m with The Domestics.

Pressed up in gold, silver and bronze vinyl, you can get yours from Kibou Records.

The Domestics can be found lurking on Facebook, as can TNS Records and Kangaroo Records.