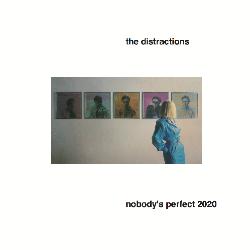 Man In The Moon

Reissue of the long out of print debut album by Manchester’s Distractions Nobody’s Perfect, with a host of extra material including the Time Goes By So Slow and You’re Not Going Out Dressed Like That? 7 inchers….LTW’s Ian Canty hears one of the great “lost” albums by a truly great band…..

The Distractions, formed in Manchester way back in 1975 by kingpins Mike Finney and Steve Perrin, were a treasure of a band. Gathering pace with in the punk/new wave boom of 1977, they married their own take on classic pop with the rough and tumble of the new breed and few (if any) did it better. The promise that they displayed meant the local independent labels swiftly became interested in the band. They subsequently debuted with the You’re Not Going Out Dressed Like That EP on the TJM imprint early in ’79. Lead track Doesn’t Bother Me was an early indication of their admirable abilities, taking their time unwinding the song towards a top quality chorus, with power and finesse plus Mike Finney’s excellent voice. This gave both a feeling of immediacy and craftsmanship and was totally endearing too.

After the success of the TJM EP Tony Wilson, who had been keeping a keen eye on the band, offered them a chance to cut their next disc for his fledgling Factory label. The resulting 45 was pure brilliance: Time Goes By So Slow is one of those few songs that will never date, a classic single that retains the freshness and mystique that it established on the very first plays every single time.

Despite their abundant talents, the Distractions weren’t overly cursed with luck. Though in A&R man Nick Stewart they no doubt found a kindred spirit (and he is responsible for this reissue on his own Man In The Moon label) the rest of Island Records, who signed them, didn’t really seem to know what to do with them. As a label they generally struggled with the new wave, which on the whole they steered clear of. Having got the Distractions to sign on the dotted line they tended to view their anti-image with the same sense of puzzlement that they approached the Slits with. The more traditional Eddie And The Hot Rods were luckier, but overall the label were at a loss on how to put over these bright young things and this would have an impact of our heroes and heroine.

By the time of the recorded material presented on this first disc, Perrin and Finney had been joined by Adrian Wright on guitar and a rhythm section of Pip Nicholls and veteran drummer Alec Sidebottom, the latter of whom had previous which included a stint behind the traps for 60s psychedelic act the Purple Gang. These three came with musical talent to burn and it is fair to say were a little overlooked back then. But Wright was a handy songwriter himself and with the rhythm section’s fire, this all added a further layer of depth to the Distractions’ brew.

So this new collection begins with Nobody’s Perfect, the original version of the LP released in 1980. Over the fourteen tracks of the record the Distractions show a rare imagination and ability. It’s very tempting to see them as Buzzcocks’ slightly older brothers and sister, with a worldly and enhanced insight into the workings of the emotional world, but still somehow retaining hope for the fantastic to happen. Opening salvo Waiting For Lorraine gives a decent pointer of their unique skills. A busy, driving rhythm sets the band off to a flying start and the song, as usual excellently interpreted by Finney, runs expertly through the gamut of doubts that go through an anxious lover’s mind when the object of their affection is away from them. It rings true, which is where the Distractions always score highly. Of course the refrain quickly embeds itself too, the tunes are always of a very high quality.

A very pretty version of Eden Kane’s hit Boys Cry was a decent fit for the band and it was released as a single with the hope that a cover might give them a foothold in the charts. This was a reasonable strategy, but it unfortunately failed and really the Distractions’ own songs were so much better. They were a flexible and imaginative outfit too and offered a variety that few others could match, whilst always keeping their own individual identity throughout. Something For The Weekend is catchy and cheeky and the neat little touches, like the rock & roll piano riff that underpins the music on this track, all go to show why they stood out from the pack.

Nobody’s Perfect is such a strong album that it feel wrong to pick out highlights – everything here has something about it that may speak to you and call your heart. Paracetamol Paralysis shows the band weren’t po-faced either, very witty words attached to a riffy piece of punk rock and Nothing is touching and soulful, with a purposeful drive. Its hard not to imagine that the writers lived these songs and that I suppose is key to why the Distractions sound so great even today. They wore their hearts on their sleeves and they were big hearts indeed.

At the other end of the scale Wonder Girl is Merseybeat repositioned adeptly for the 1980’s and the choral arrangement of Looking For A Ghost is incredible. I can’t think of any other band at the time that would even have tried it, let alone pull it off with such aplomb. Valerie brings Nobody’s Perfect to an all-action rousing end, gentle piano giving way to a rollicking punk pop masterclass. I found this LP beguiling from the get-go, there’s a warmth to it that remained in my mind long after I had finished listening to it, as well as corking tunes all the way through brilliantly played and sung. A true gem.

The rest of the selections here are made up of their Island singles, the And Then There’s… EP issued on That Records in 1981 after they left Chris Blackwell’s empire and a compilation cut Leave Me (produced by the great Richard Strange). Kingpin Steve Perrin had left the band after the exit from Island and was replaced by Arthur Kadmon (ex-Ludus). The EP in particular offers a tantalising glimpse into how the Distractions could have thrived as the 1980s went on. The horns added to Ghost Of A Chance work well, as Mike Finney was always a soul singer in truth, the r&b flavour suits the band ideally. Love Is Not For Me has some great funk jabs and Leave Me shows the subtle craft of the Distractions was still in full effect.

Disc two here goes under the title of Ride Your Ideas Ragged, which seeks to gather up all demos, the early singles from the band 1978-80, plus a new remix of the album by Nick Halliwell. By sidestepping any unwise modernisation, he has done wonders. Instead he subtly brings up different elements up in the sound and gently adds small but necessary fills. What he presents here a new and thrilling alternative to the 1980 mix, exposing hidden layers. This spotlights Mike’s excellent voice, but also gives a different perspective too – you can finally see the sense of Nick Stewart’s pursuit of Gary Usher (producer of the Beach Boys) to helm Nobody’s Perfect hearing the harmony vocals on Leave You To Dream, or properly hear some neat bass runs on (Stuck In A) Fantasy. Mike Finney’s voice is given pride of place and this mix also offers clear perspective of the instrumental prowess at work. It all gels together wonderfully well.

Apart from the remix, there’s a lot of fun to be had on their early punky demos, with the ratty sound of the first version of Pillow Fight a real winner. The Time Goes By So Slow single, as noted above, never ages and the TJM EP finds the band limbering up the gifts at their disposal nicely. No wonder Tony Wilson jumped in.

Nobody’s Perfect didn’t make the kind of mark it should have and as a consequence has remained sadly unavailable until now. This reissue is sorely needed and the booklet meets the standard set by the musical contents. Ex-NME writer, novelist and long-term advocate of the band David Quantick provides an excellent sleeve-note to set the scene and Nick Stewart explains his crucial relationship with the band. Nick Halliwell also tells us about the remix, which rounds off a fine collection.

Happily the Distractions sprang back into life in the 21st century and have since supplied us with two great belated follow-up LPs in End Of The Pier and Kindly Leave The Stage, from 2012 and 2017 respectively. I caught them live a year or two back and they were just brilliant, with Finney’s voice still a thing of beauty and the new version of the band spot on (see here for more). I would urge you to check them out live as you really wouldn’t want to miss the chance of seeing the songs featured here done justice, would you? Nobody’s Perfect maybe, but this reissue is.