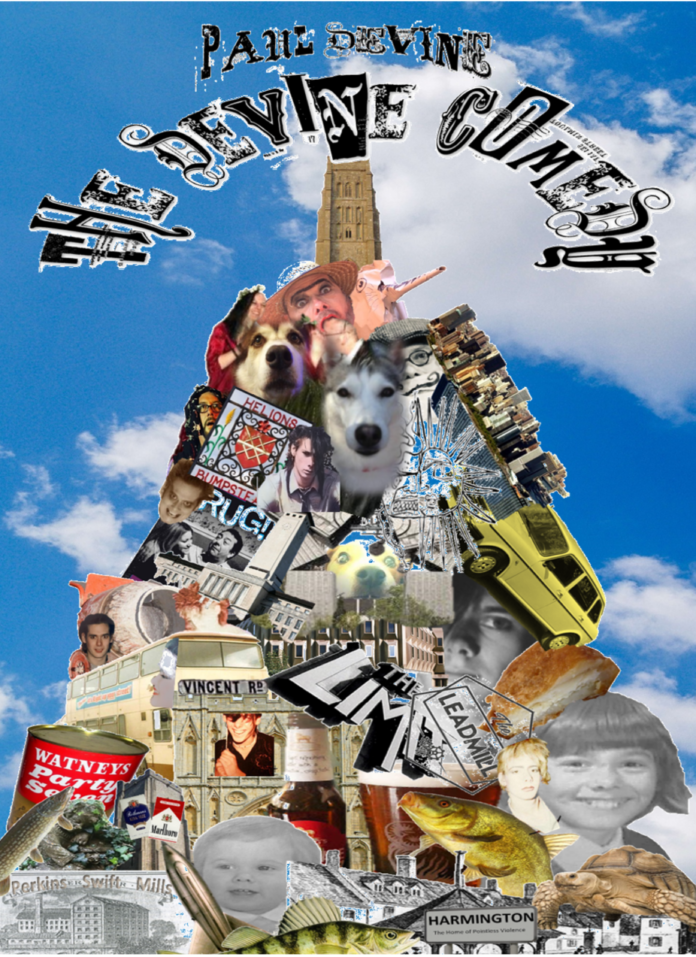 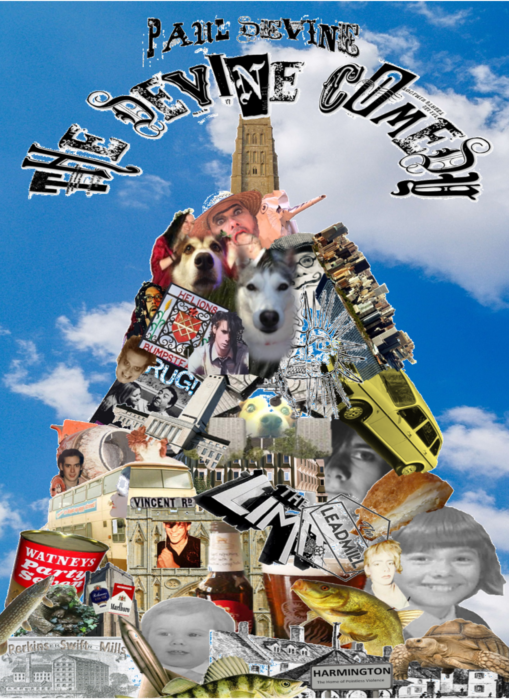 A self-penned story of Paul Devine’s goth-punk band Siiiii, placed within the context of a touching memoir.

With the name of the writer embedded in the title, The Devine Comedy might be also seen as a nod to Italian Renaissance literature and a homophonous Brit-Pop band. Indeed, racing through uncomfortable job interviews and turbulent years of music collaborations, Paul Devine describes some events of his life as if he was a character of Dante exploring the circles of Hell.

While the first association is rather metaphorical, the second one hints at the Siiiii’s story. One of the members Wayne Furniss used to play the guitar in Pulp, who at that point were a fledgling Sheffield band. Despite admitting the drastic shift of genres, Furniss was beguiled by the “tribal” style of Siiiii’s playing while watching their gig and subsequently joined them as a drummer.

Taking their mysterious name from The Soft Machine, Siiiii were formed in Sheffield in 1983. The industrial atmosphere and decaying scenery of former mills resonated with the dark mood of William S. Burroughs’ novel. After sending dozens of their cassettes to all corners of the music industry pool, they received a response from Mick Mercer, an editor of Zig Zag magazine. Siiiii would later be featured in his The Gothic Rock Black Book. A keen goth chronicler, Mercer invited Sheffield “doomers” to London for an interview. This visit resulted in exposure to a wider audience, both British and foreign, as well as disillusionment with record labels. While attending the office of IRS who “featured artists like The Fall and Magazine on their roster”, Paul was informed that it was him not the band’s music that the label was interested:

“The gentleman we met, who wore the de-rigeur black-hair-sunglasses-black-clothes uniform, popped our tape into his cassette player, played a Siiiii track for about ten seconds, turned it off and said “Now… we’re not keen on the music. But Paul… you can sing!” I said, “Why thank you.” And he went on to suggest that the label had someone “name” in their “pool” who were between vocalists. Would I consider? I said I wouldn’t. And we left.”

The material written by the band around 1983-1986 would be released only twenty years later. After the collective disbanded no one expected a miraculous reunion until one day Paul was challenged by his goth stepdaughter. Taking up the gauntlet, he contacted former bandmates who, to his surprise, responded. So did Mick Mercer who eventually helped the band to establish their online presence.

Although the personal story is at the fore, the book contains a few chapters that shed light on the music scene, particularly in Sheffield, East Anglia and South Wales. Unlike Sheffield, which produced multiple talents varying from Cabaret Voltaire to Arctic Monkeys, the music chronicle of Bury St. Edmunds can be restored only with the help of an archivist. Taking this role, Devine, who spent most of his formative years there, describes the place as “a hotbed of darkly punk-influenced bands”. At that point the term “goth” was not ubiquitous, so the genre was defined as “Doomy Music”. The Antics, The Wynd-Ups, Dead Vogue, Cult of the Head and other local “doomers” became legends of Bury. “Because there was very little else for teenagers to do, these bands gained genuine followings amongst the youth of East Anglia. Members of The Anticx and The Wynd-Ups, Mick Hand, Gary O’Conner, Ricky Cook and Terry “Crow” Taylor, formed probably the most influential Post-Punk band ever to come out of Suffolk, 13th Chime”.

With similar affection, Devine pays homage to the legendary venues of Sheffield. The atmosphere of The Leadmill and The Limit is described in detail in the relevant chapter. The former had a direct link to the band as its manager Jules also managed Siiiii.

While reading the book further, one realizes that the author does not intend to hold anything back from his reader. In one of the chapters, Devine confesses about being diagnosed with ADHD: “In fact, if you are reading this particular sentence you are seeing ADHD in action, because this is the fourth edit I have made to The Devine Comedy since it was published!”.

Although presented digitally, the self-published edition evokes a warm feeling akin to a scrapbook. Each chapter is completed with supplementary YouTube links that illustrate the topic. Some are most charming. A childhood memory of a tortoise’s death suggests a relevant video Winter Tortoise Care. Reflecting on his connection to music and events of his life that shaped his vision, Paul Devine invites the reader into his world, filled with strange coincidences, ups and downs, magic, philosophical take on death and never-ending inspiration. It’s a lovely read.

More music by Siiiii is available on the band’s website and BandCamp.

The Devine Comedy is available as a Kindle Edition on Amazon.