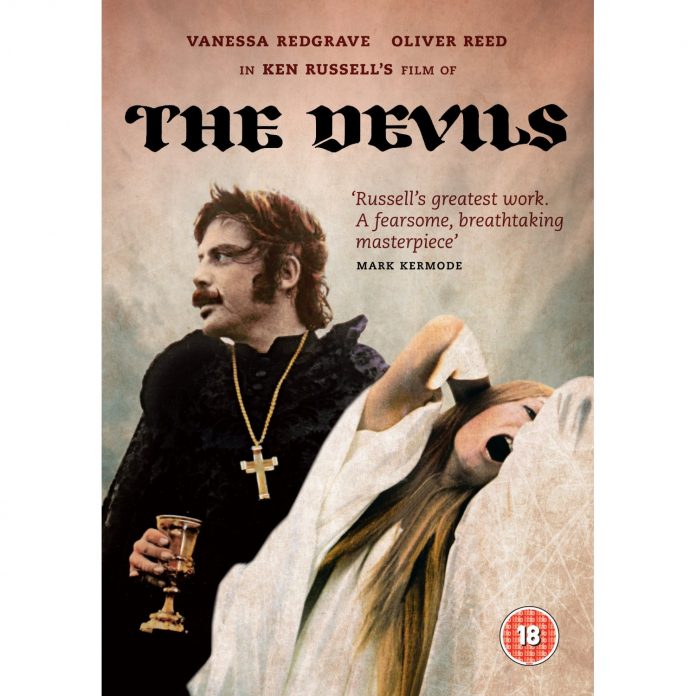 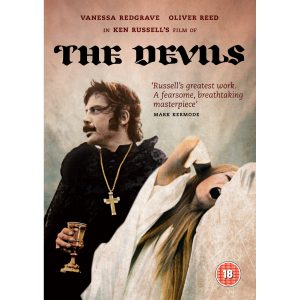 Over forty years ago, Ken Russell’s 1971 feature film ‘The Devils’ caused indignation amongst many cinema going audiences and uncomprehending film critics after one of the longest-running battles with the BBFC was resolved and the film finally opened in cinemas.

In 2012 the picture is rightly recognised as a true landmark in British film history. The Devils finally gets its DVD premiere on 19 March, released by the BFI in the original UK X certificate version, accompanied by a host of new extra features.

The death of the visionary British director Ken Russell, in November last year, ignited a torrent of tributes from both eminent film industry figures and movie fans. This 2-disc Special Edition release of what many consider to be his very greatest work is a justly fitting tribute to one of Britain’s true maverick and original filmmakers.

The Devils is based on John Whiting’s 1961 stage play and Aldous Huxley’s classic 1952 detailed fact based novel, The Devils of Loudun, which in turn drew upon a translation of Michel de Certeau’s The Possession at Loudun. The highly literate film script written by Russell is all the more shocking as every outrageous element, from self-flagellating nuns, massive piles of putrid plague victims in pits, the rows of rotting, maggot infested corpses of Protestants who have been ”Ëœbroken upon the wheel’ and a mass orgy of nuns, are based upon historically documented incident.
A major inspiration for Russell’s whole approach to The Devils, and Derek Jarman’s towering and semi abstract silent movie style white sets, was Aldous Huxley’s description of the exorcism of Sister Jeanne as resembling “a rape in a public lavatory.”Â Though The Devils carries faint echoes of the cinematic work of Eisenstein, Josef Von Stenberg and Carl Theodor Dreyer’s 1928 silent picture The Passion of Joan of Arc, it is undeniably really the product of Russell’s singular, penetrating vision.

In 17th century France, a promiscuous and troublesome local priest, Urbain Grandier (Oliver Reed), uses his powers to protect the walled city of Loudun and both its Catholic and Protestant citizens from destruction by the establishment, represented by Catholic Cardinal Richelieu (Christopher Logue), who is the trusted confident of the utterly decadent and quite possibly insane King Louis XIII (Graham Armitage). Grandier does not suppress his carnal desires and makes one woman pregnant (Georgina Halle) then rather callously rejects her and marries Madeleine Dubrous (Gemma Jones) in a secret ceremony he himself conducts. In the local convent, the mother superior Sister Jeanne (a totally committed Vanessa Redgrave) begins to have sacrilegious sexual fantasies involving Grandier.
When Grandier declines to become the patron of the order and when she learns of his marriage, Sister Jeanne becomes hysterical and invents stories of how Grandier has engaged in orgies with the nuns. Soon Grandier stands accused of the demonic possession of Sister Jeanne, whose erotic obsession with him fuels the hysterical fervour that sweeps through the convent.
Richelieu seizes upon this story and dispatches Baron de Laubardemont (the wonderful Dudley Sutton) and the church’s chief exorcist, Father Barre, (Michael Gothard, deliberately dressed like an early 70s hippie ”â€œ as Mark Kermode notes in the DVD commentary, a false prophet) to extract confessions from the nuns and force Grandier to admit to being an agent of Satan. 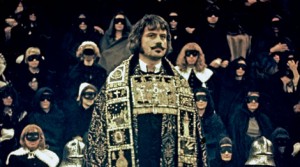 Russell admitted that The Devils was his only political film. His picture makes clear that the nun’s afflictions (whatever caused them ”â€œ a theory concerning the LSD-like chemical ergot found in damp bread made from rye has been put forward) were deliberately inflamed by the priests and politicians in an attempt to usurp a prominent local figure from office for political ends. Totally centralised government and the powerful concerned parties behind enforcing it, dealing in sexual repression, hysteria, ignorance and vile brutality, are the truly demonic forces at work in The Devils. Rather than a deliberately sacrilegious work, as many perceived it to be during the early 70s, The Devils is in fact a heartfelt plea for embracing and comprehending the true teachings of Christ, removed from the self serving yoke of the Catholic Church.

With Ken Russell’s audacious and dazzling direction, magnificent performances by the late, great Oliver Reed (surely the acting highlight of his career, proof that if Reed had put his mind to it he could have been the equal of any movie actor of the period) and Vanessa Redgrave, superb, innovative Derek Jarman sets (which can be seen to have inspired a whole wave of post-modern architecture) and a brilliant transcendent and discordant score by Sir Peter Maxwell Davies, The Devils stands as a reflective and utterly sincere commentary on religious hysteria, political persecution and the corrupt marriage of church and state. Reed’s Grandier emerges as a truly heroic figure because he is all too human. Vain, proud and self centred he never the less rises to the ultimate challenge to the people in his charge and the violent end of his life with incredible dignity and stoicism.

The BFI have commendably pushed the boat out with the special features for their handsome DVD premiere presentation of the original UK version of Russell’s masterwork. There is a newly filmed introduction with broadcaster and film critic Mark Kermode (2012, 2 mins: commendably, Kermode has done much over the past decade to renew critical interest in The Devils) and a full audio commentary with Ken Russell, Mark Kermode, editor Michael Bradsell and Paul Joyce, recorded in 2004. The documentary Hell on Earth (directed by Paul Joyce, 2002, 48 mins): explores the film’s production and the tumultuous controversy surrounding its original release, while Director of Devils (1971, 22 mins) is a vintage documentary featuring candid Ken Russell interviews and unique footage of Sir Peter Maxwell Davies recording his justly renowned film score. 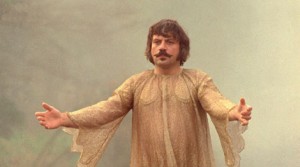 There is previously unseen original 1971 on-set footage with commentary by Russell’s editor Michael Bradsell (2012, 8 mins) and the UK and US theatrical trailer of the film. On-stage Q&A with Ken Russell (2012, 13 mins) is an excerpt from a conversation with Mark Kermode filmed at the National Film Theatre during 2004.Perhaps most thrilling of all is the inclusion of Amelia and the Angel (1958, 26 mins): Ken Russell’s second short, made by the BFI’s Experimental Film Fund. A charming mix of religious allegory and magical fantasy, starring the nine-year-old daughter of the Uruguayan ambassador to London, Mercedes Quadroons, Amelia and the Angel is an Expressionistic Catholic vision of sin, confession and fruitful prayer. The little girl’s search for a new pair of angel wings upon the streets of London (her previous ”Ëœborrowed’ pair from school have been ruined by her tearaway brother) is an allegorical work of considerable emotional force. In fact, it launched Russell’s professional filmmaking career, as Huw Wheldon, producer of the BBC’s Monitor arts programme, offered him a job having seen it. A 44-page illustrated booklet featuring new essays from Mark Kermode, Craig Lapper (BBFC), film editor Michael Bradsell and Sam Ashby, plus film notes, biographies and credits neatly raps up this obligatory acquisition.

The Devils screening at BFI Southbank on 19 March at 8.00pm

In memory of Ken Russell and to celebrate the release of The Devils on DVD, the ‘Director’s Cut’ of the film will be shown at BFI Southbank on Monday 19 March at 8.00pm in NFT1. A panel of experts and members of the cast and crew will take part in a discussion afterwards. (Tickets)