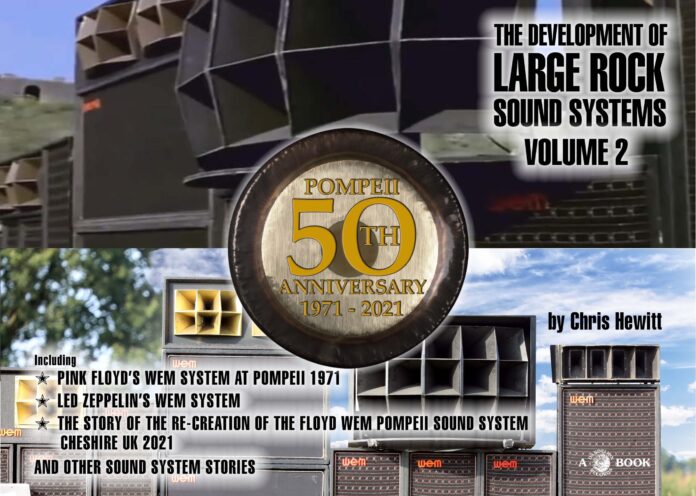 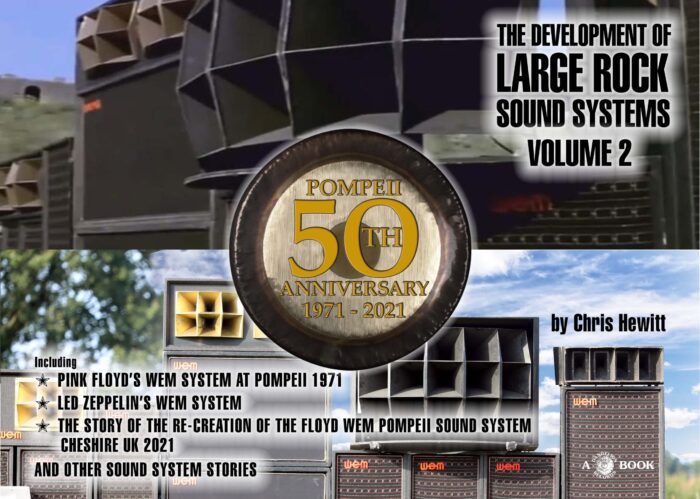 Celebrating 50 years since the Pink Floyd’s Live at Pompeii was released, Chis Hewitt, the obsessive collector of sound systems and recording equipment, has put together a fascinating celebration of the event, along with the definitive record of large sound systems, their development and use.

The book covers a re-creation of the original amphitheatre show by members of The Australian Pink Floyd, playing through the actual equipment used in the film. The band, fronted by Steve McElroy, performed 4 tracks in a field at Chris’s base in Cheshire and was filmed using 4 cameras and a drone!

Chris’s attention to detail is legendary – as Mark Radcliffe who witnessed the event says in the book, “Chris has a reality. He wanted to build this system and he has done it and I admire him”.

As a lifelong Pink Floyd fan, I have always regarded The Pompeii film as one of the highlights of their career. Meddle, my favourite Floyd album, which was released in ‘71, and, as I said in LTW’s piece on iconic albums from that year, was probably the last time the band actually had fun in the studio, before Water’s domination, and slide into self-obsessive writing. The album is core to the performance, with Echoes forming the film’s centrepiece. Cuts to twisted stone faces and gurgling hot springs give an allegorical nod to the city’s tragic end.

The performance is hypnotic in its delivery and effect on the viewer. The late Peter Watts, Pink Floyd’s Road Manager explains about the blue parasol used in the original film, which seemed to mark time by acting as a sundial. “It is a kind of mystical catalyst that concentrates the energy of the earth, that of heaven, as evidenced by the blue colour, which explains the transcendental state so deep in which the viewer falls while listening. You guessed it! A blue parasol was also part of Chris’s re-creation!

Moving on through the book, bizarrely, but of course of equal important to Chris, is the section on touring vans, with scale models and a full-size re-creation of a red Avis van used by Pink Floyd! There is even more coverage of the WEM components used at Pompeii and Pink Floyd’s equipment after WEM.

The section on the development of parabolic reflectors is fascinating. Evolving from spherical sound, or acoustic ‘mirrors’ used to listen out for enemy aircraft in the 1930’s, these huge WEM dishes could project 1-3 HZ over a distance of five miles! More on this subject and in depth interviews can be found in volume 1 of this book which we covered back in August 2020.

The book goes on to explore the relationship between Led Zeppelin and WEM, Chris’s journey into large PA’s and festivals, Mega PA’s, RSD PA hire and manufacturing, Mitex PA hire and amplifier manufacturers, ASS – acoustic sound systems (So many acronyms!), and ends with a section focusing on hire companies in the 1970s. There are also a few paragraphs on the essential role of Roadies, the important link between the hire companies and their clients!

The book contains fascinating interviews, not only with Peter Watts but also Scots/French film director Adrian Maben, who shares anecdotes from the Pompeii shoot, describing it as ‘“A visual scrapbook of music and trivial conversation. A record of the passing of time”.

This lavishly produced coffee table style book, a labour of love, runs to 180 pages and is packed with incredible detail and many related photographs spanning the decades. What comes across is just how passionate Chris really is.

The book is published by Dandelion Records and is available to buy here: https://www.deeplyvale.com/wem-pa-book

Chris is a guest on my Incoming Show Wednesday 26th January 2022 at 9 pm. You can listen live here: https://s2.radio.co/sab795a38d/listen  through the free Apps and Alexa.

Listen on the Apps: