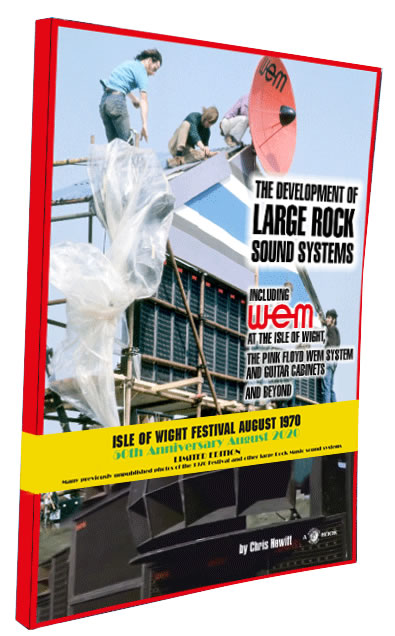 Chris Hewitt is an avid collector of vintage sound systems and through his company, CH Vintage Audio is responsible for many of the original equipment used in film and television. Most notably in the films Bohemian Rhapsody and Rocket Man, where he supplied all the sound desks, amps and speaker cabinets used in the films. His new book explores the origins of large rock sound systems from the invention by Charlie Watkins of WEM (Watkins Eclectic Music Ltd) of the first large scale PAs, known previously for their range of budget guitars, through the ‘British PA Revolution’ to the stadium sound systems of the late ‘70s and early ’80s.

The original problem was achieving the same balance of sound that bands were recording in the studio. Often the vocals were swamped by the rest of the instruments. It was one thing in a small venue but when bands played outdoors, the inadequacy of the PAs of the time was all too apparent.

The book traces the development of the sound from WEM’s first slave amp which enabled Charlie Watkins to increase the output from a miserly 30w up to a 100w, thorough his Audiomaster top ( which lay in the cellar of 4 years before being properly developed then used by all the major bands of the day from David Bowie to Pink Floyd), to Parabolic Reflectors, which according to Mick Jagger ‘looked like ‘giant tits’ (huge red discs with ‘black nipples’ in the middle) to amplify the sound (they could send 1kHz to 3kHz for a distance of 5 miles!).

The book, which includes an extended section with many photos of 1970’s Isle of Wight Festival, moves through the development of huge stadium systems using bins and horns from the likes of Martin and Marshall. Packed with interviews with all the major contributors and full of photographs and promotional material from the day, the book is a must-read for anyone interested in the development of the heavy rock sound and the bands involved.

I had a long chat with Chris; such a fascinating person with a long and rich history in the music business, including a stint in and managing a band called Tractor who were signed to John Peel’s Dandelion Records in the early ’70s, a label he has now registered and owns. He explained to me how he got started collecting equipment

“I sold a classic car, a Porsche 911 and put the money into the first pieces of audio equipment. The thinking was that if I ever needed any money it would be far easier selling the odd piece rather then trying to quickly shift a 911!”

Chris has a huge collection of classic amps, speaker cabinets and all kind of studio equipment. The latest being an STC Ball and Biscuit microphone used at Abbey Road Studios during the Beatles era!

More about the book In Chris’s words:

“In the mid to late ‘60s as bands changed from ‘pop groups’ to ‘rock groups’ and festivals started to happen, one company seemed to be providing the sound at almost every indoor concert or outdoor festival. WEM PA Systems, the brainchild of Charlie Watkins of Watkins Electric Music were used by Led Zeppelin, The Who, The Rolling Stones, Jimi Hendrix and of course Pink Floyd. Without Charlie Watkins and WEM there probably would have been no Martin Audio, no Turbo sound, no Funktion One – as he shared his ideas with people like Tony Andrews and Dave Martin. David Gilmour’s WEM Starfinder cabinets have been seen on stage with him from the late ‘60s through to the present. The Isle of Wight Festivals with Dylan in 1969 and Hendrix and the Doors in 1970 could not have happened without these PA systems. Pink Floyd at Pompeii was a glorious feast of WEM equipment. Here we look at the development f the festival touring Pas from the ’60s into the ’70s and how that period triggered a whole industry”.

The book is published by Dandelion Records and is available to buy here: https://www.deeplyvale.com/wem-pa-book