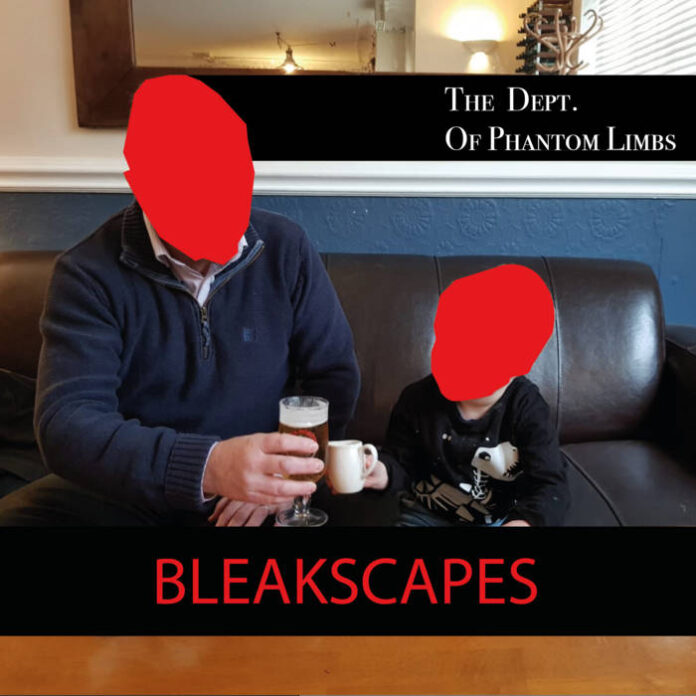 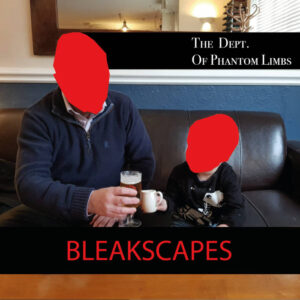 The Dept. of Phantom Limbs: Bleakscapes

Transmissions on the midnight radio from Johnny Day, sole employee of The Dept. Of Phantom Limbs, a somewhat shadowy agency responsible for the broadcast of ‘cursed sounds, haunted recordings and anomalous audio’.

After a brief introduction insisting that Everything Is Fine (I very much suspect it is not), Citrus Cowboy Existential Horror sets out the stall for the album by launching into a stream of perfectly twisted verbiage filled with the blackest of humour, the kind only us more disturbed souls will find ourselves chuckling cynically at, nodding along to the increasingly threatening electronica through the thousand-yard stare of our morning coffee. ‘Jacket waxed, murder boots on, ready to switchblade the town silly..’

There is a strong shade of Blue Jam here and at times the spoken word delivery reminds me most specifically not of Chris Morris but of Chris Morris doing Jarvis Cocker. However, alongside the chilling vignettes and faux-samples as the album progresses the music and lyrics become much more of an intertwined entity. How To Salute A Magpie introduces us to some surprisingly beautiful, ethereal vocals that sound like the spectre of Thom Yorke decided to come back and haunt the earth by singing about magpies. Kingdom Come, a highlight track for me, mixes darkly pop melodies with a bizarre combination of rap, trip-hop and electro. It’s a bit Bowie, a bit Underworld, a bit Kanye, very catchy and a lot weird.

Folklore uses trancy, tribal backing vocals to underscore the bleak absurdity of the piece whilst I’m The Man For The Job suddenly and unexpectedly goes all fuzzy guitar indie punk. Adversity Makes For Odd Bedfellows is an almost conventionally straight up, if slightly theatrical, ballad. Skegness In Flames, possibly one of the greatest song titles ever, is a scuzzy tale of costal politicking, ‘flat whites smacked from the hands of undersexed sex workers’ and ‘indecipherable messages scrawled across the walls of tourist attractions’. Starting as a bitter rant it melts into something mournful and slightly hysterical in the second half. American Carnage, another highlight track for me, is downbeat and, dare I say it, rather romantic sounding. In a holding hands as the world burns kind of a way.

Inhabited by tragic and treacherous figures of ineffectual masculinity there is a pleasing push-pull between the lyrical content of this album and the more melodic and moving moments of the music. Johnny Day wears his vocal styles like carnival masks to create a soundscape (or bleakscape as it were) that feels as rich and full as it does absurd and terrifying. It’s a dystopian vision but a peculiarly British one, raised ‘in a taxi smelling vaguely of Lynx Africa’.