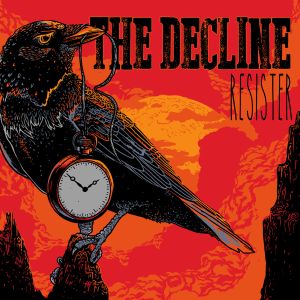 Australian skate-punks The Decline return with a new line-up and their third album. Dave Beech finally pulls his finger out and puts pen to paper.

Ten to fifteen years ago, it was almost impossible to turn on an alternative music channel, watch a film, and even in some cases play a video game, without being assaulted by skate punk from the likes of Bad Religion, Pennywise and Lagwagon. Such is the nature of the music industry however, that the third wave of emo was just around the corner, and soon black eyeliner and bad dye jobs pushed skate punk out of the limelight and into, at best, the periphery.

Fortunately, the current pop-punk resurgence has also seen a renewed interest in the genre’s faster and heavier cousin, allowing for bands such as Australia’s The Decline to break out of their native country and begin to make waves both in the States and Europe. Now three albums in to a nine year career, Resister marks the band’s first record since the introduction of new guitarist/vocalist Ben Elliot and bassist Ray Chiu, and finds them once again in fine form.

From the first notes of opening track New Again, it’s difficult to suppress the urge to dust off your old deck, loosen the trucks and go hell for leather back to the carefree days of 2002. That doesn’t mean to say that Resister is purely a nostalgic record, though unsurprisingly nostalgia does feature pretty prominently within the album’s narrative, and as such it’s best viewed as a contemporary nod to the genre’s heyday. The Blurst of Times for instance, smacks of Bad Religion had they grown up in Perth instead of LA, whilst Broken Bones, with its breakneck percussion and stop-start ending could have been taken straight from Fat Mike’s songbook.

It’s the band’s vocals though, that set them apart from their influences, and though an easy comparison to make would be to fellow Australians Frenzal Rhomb, there’s more to The Decline than dreadlocks and bongs on the beach. The complexities of the record’s instrumentation transcends that of your average skate-punk album, whilst the melodies in tracks such as the aforementioned Blurst of Times or Little Voices will appeal to more than just the pierced and mohawk-ed.

Though not wholly original in its delivery, there’s very little negative to say about Resister, or indeed The Decline as a band. Okay some of the lyrics might leave a little to be desired, but even then it’s difficult to tell whether or not tongues are firmly in cheek. Anyway, when such blemishes are as few and far between as they are here, it’d be rude not to overlook them. And when the average track time falls in around the two minute mark, even those of us with dodgy knees, whose skateboarding days are long behind them, can dig out the original Playstation, blow the dust off the back of Tony Hawks Pro Skater, and finish the game in roughly the same amount of time as the record takes to play through. Bliss.

Dave Beech is a music writer based out of Manchester. Links to his work can be found over at his blog, Life’s A Beech, as well as his Louder Than War author’s archive. He also tweets as @Dave__Beech.