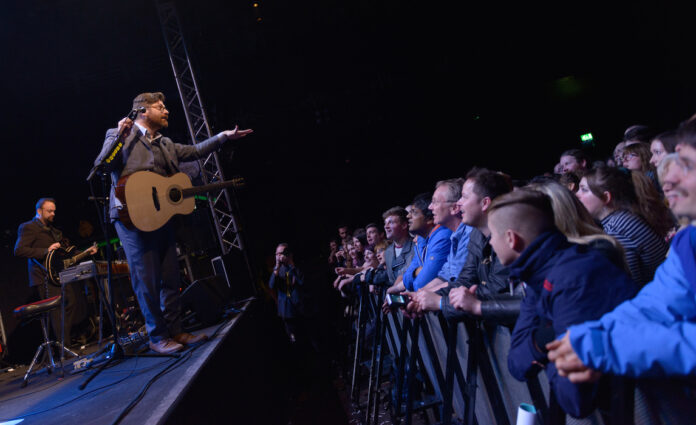 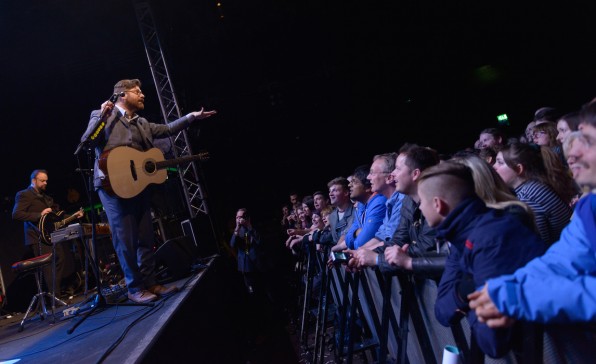 A phenomenally eclectic performance by the brilliant Decemberists, bringing a veil of misery over Leeds this evening. However, the crowd welcome this with open arms as they embrace their heroes.

With a new album titled What a Terrible World, What a Beautiful World, The Decemberists are back with a bang albeit a miserable one. A band that I’ve longed to see for numerous years are but moments away, but first another wonderful act in the form of Serafina Steer.

A huge stage graced by one lady and her harp, we’re unable to stop ourselves swooning over the beauty of her voice, the delicacy of her harp and her overall warmness. The perfect set to open a valentines day show, its all over too quickly though as the lights are once again dimmed.

Lead singer Colin makes his way to the centre of the stage, bursting into the brilliant The Singer Addresses His Audience, a truly fitting opening if there ever was one. During the emphatic applause at the end of the track he is joined by the rest of the band for a rabble-rousing rendition of 16 Military Wives, which is an early favourite. 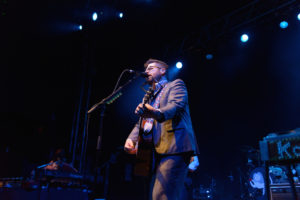 The band poke fun at the fact that it is Valentine’s Day and that they’ve tried to write love songs, yet they always seem to fall back into their miserable groove. That said the set is a lot more upbeat than anticipated, they go along way to create a real party atmosphere. However, tracks like The Island sound immense and whilst they aren’t upbeat this is what I’ve come to expect from The Decemberists.

A beautiful sprawling song, it’s akin to Death Cab for Cutie’s longer tracks, the atmosphere is incredible as it builds with effortless ease. The heartfelt vocals perched atop the heavy deliberate instruments, it reaches a huge crescendo, a real musical journey and interspersed around the other upbeat tracks it’s almost a show in itself.

To top The Island was going to be difficult, yet Colin manages to distil the atmosphere, with a few jokes around the song that follows. As he replaces Los Angeles with Blackpool for the opening bars of Los Angeles, I’m Yours. As the crowd erupts into a mass sing along this is yet another highlight in a set strewn with hits, to say that The Decemberists are at the top of their game right now is a huge understatement.

Their latest LP gets a hammering, with numerous tracks getting aired this evening and they blend so beautifully with the rest of the set. A personal favourite for me and a lot of people is Make You Better, it has everything I like in a song and tonight it sounds so perfectly upbeat in the midst of the slower part of the set.

The latter part of the set is a lot more downbeat yet there is still a buzz of energy on the stage and in the crowd and Eli, The Paper Boy is greatly received by the crowd. As the band close with O Valencia, the venue is jumping with excitement. Yet complete respect is maintained throughout the set, when the band does leave the stage though the venue is awash with feet stamping, whooping and hollering.

Never to be outdone, The Decemberists give us not one but two raptuous encores leaving us completely blown away and somewhat overwhelmed. So few bands have the ability to play such an eclectic set with such gracious ease, its plain for everyone to see how good these guys are and how utterly astonishing this evening truly was.

The Decemberists can be found online here: decemberists.com. They’re also on Facebook and they tweet as @TheDecemberists.