Home Blogs The ‘Death’ Of The Hipster – Is Being Hip Not Hip Any... 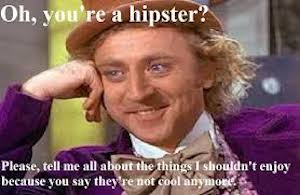 Jack Kerouac and Neal Cassady started it all with their determination to be hip and their frantic and beautiful pose detailing the quest.

All the best so called youth cultures don’t actually exist.

All the best scenes are ferociously denied and all the tags never fit.

Hipster is the loose term for the beard bearing post college heads on their fixie bikes messing around in music, coffee bars, the media and internet start ups that perch on the fringes of city centres. Running around those kind of areas that were once no go but or now called Noho or Ohno. From their epicentre in Brooklyn’s Williamsburg to Shoreditch/Hackney in London to Manchester Northern Quarter or to the retired hipster haven of Chorlton or to the many other city fringe zones they have created a whole world around their post work, post career lives whilst denying their very existence.

But then, of course, there was no such thing as punk or goth or any of the other so called youth tribes. These are tribes without leaders, codes without rules and a loose, vague idea of how to live in a shape shifting modern world. Of course hipster never existed and of course hipster exists- confusion is at the heart of all youth culture.

The hipster cliche is the sleeve tats, the too cool music taste, the severe sawn off hair, the woodman beard for men, the too big glasses, drinking nitro glyricne coffee from old jam jars in fake beat up cafes, the fixie bike. It’s the post hardcore math rock bas player look multiplied to an extreme. They are the thrift store cut n paste with machine gun ideas. They are the sockless evangelists of 21st century cool rejecting the mainstream fashion that is forever robbing their ideas. They rush through music faster than it can be streamed and reject conventional thinking with veganism being part of the armoury because they are free thinkers.

Some fringes have gone a bit steampunk with monocles and Penny Farthings and the George Elliot novel country gent look but then being dandy was always the mainline of youth culture.

On the other had a hipster could be defined as someone was is living fast forward and surfing on new ideas and is hungry for change and that is a GOOD THING. Strip away the cliches and the snobbery and this forward looking idea as currency culture is the only way to live.

Recent reports say that the hipster is dead – is this a case of long live the hipster or are those beards getting too bristly? or have their arms become too full of ink for any more tattoos or have people become too exhausted with trying to be hip all the time? or has the look become too codified for the eternal hipster? with too many rules and regulations imposed by style mags for the free thinkers? or is it a case of the the ultimate hipster band Parquet Courts turning out to be just the The Bravery in tighter trousers or Portuguese footballer Rual Meireles copping their beard and tats look.

Whatever- the death of the hipster is just another ruse another twist in a scene that never existed. After all if something never existed it could never die.