Home Blogs The Death Of Television – The Big Bang Theory 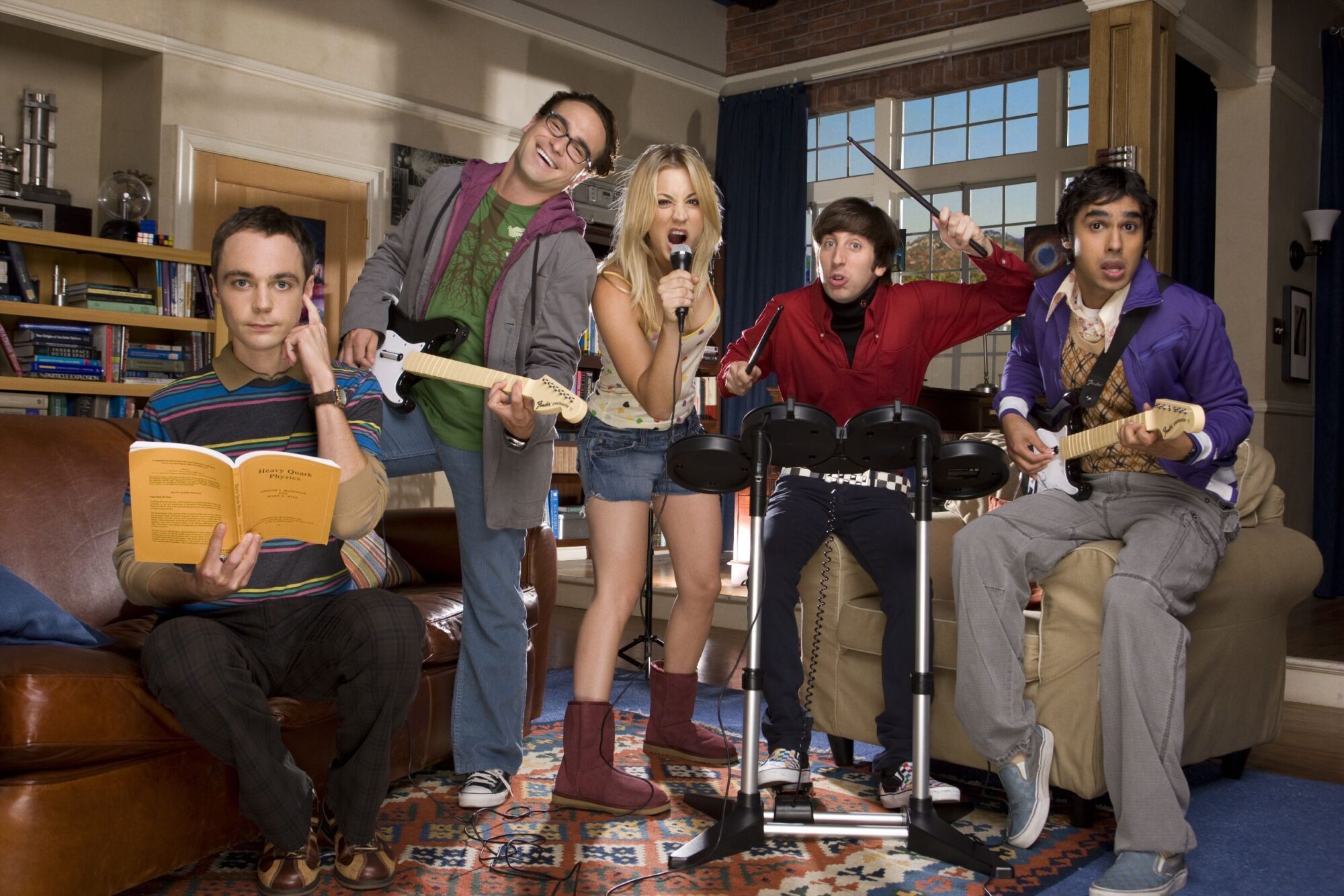 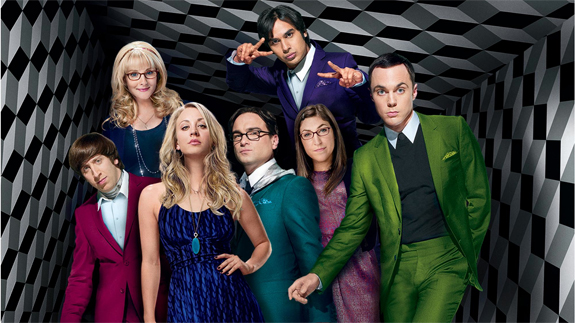 “…set my TVR to record Big Bang Theory. The whole world is watching this thing and I’ve got to know why.” – Dr. Cox (from TV’s Scrubs)

Why indeed? The Big Bang Theory is arguably the most watched sitcom in America, the UK, and probably the whole world. According to the Radio Times website, the show’s last series had over 3.3 million viewers of it’s E4 slot which, although not as big as either The Bible or The Beatles, is a pretty impressive amount. I’m one of that statistic, and find myself religiously sitting in front of the TV, staring slack-jawed at the screen, absorbed in the on-screen antics of the four genius-geeks who attempt to get past the high-school mentalities that seem to continue to affect their existence even in adulthood.

But then I realised something. The Big Bang Theory is actually terrible, and has about as much depth as the puddle pissed by any nerd threatened with the fist of some bigger kid. The characters are barely two dimensional and for a group of supposed geniuses the comedy is no different than a bunch of monkeys in a zoo flinging shit at each other and trying to hump anything that moves. That is except for the character Sheldon, the only central character who ever does anything slightly funny and even then it’s a rare thing. The 4th episode of series six had a brilliant scene involving a game of Pictionary…

So without Sheldon we’re left with Leonard and Penny and their constant up and down romance. Back and forth romances are the bedrock of any would-be sitcom. Ross and Rachel, JD and Elliot, the girl from How I Met You Mother and that architect who has the personality of an old sock, the list goes on. But what The Big Bang Theory does is ties this tried and true format with a pretty bow of casual sexism. Penny, a blonde airhead who (before she met Leonard, did nothing but fail in life, get drunk, and fuck whoever would take her home at the end of the night) is constantly made to feel inferior intellectually by the four giant man-brains across the hall. Before Leonard succeeds in nailing Penny, he spends most of his time pining over the “girl next door” and being constantly disappointed at the fact that girls seem only to care about brawn and not brains. But hell, ya know what women are like, right? According to this show, nothing but moronic cum-buckets. Though for $350,000 per episode in the seventh season, I’d dress up as a slut and sell my dignity short too. Good call, Kaley.

The show’s head-honcho’s saw this after a few series and began to implement a sprinkling of “intellectual” female roles to deter would be feminists from burning their bras and shitting on the studio doorsteps. These came in the guise of either one of Leonard’s girlfriends (often used to forget about Penny so, if your watching intellectual ladies, you’re only getting dicked because your man can’t get himself someone as pretty as Kaley Cuoco), or the now familiar faces of Amy and the girl Howard is with. Ya know, the one with the big boobs and the charisma of a wedge of cheese . First, lets deal with Leonard’s significant others, we’ve had:

Leslie Winkle – A woman who, though more intelligent than Penny, only cared about getting dicked (though this admittedly changes at some point and then changes back when she decides she just wants dicking again, albeit this time by Howard).

Stephanie Barnett – Granted, she was a doctor, but a mentally unstable one giving credence to the theory that all women are emotional psychos.

Priya – Again, her career suggest a pro-female position as she is a highly successful lawyer. But emotionally she is possessive and jealous, attempting to take Leonard (who, as a male, does little to no wrong in any of his relationships except when he suggests he’s metaphorically fucking his mother while in bed with Penny) away from one his close friendships. 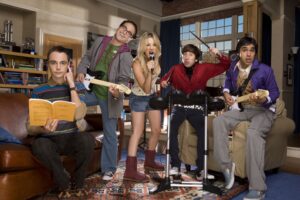 And this is just three examples. The additions to the regular cast are no better. Amy, who starts a strange relationship with Sheldon in which she desires physical attention but, of course, succumbs to the will of her superior male partner, is arguably as intelligent as her male counterparts but due to the influence of Penny soon finds herself aspiring to be a “girly-girl” and “getting attention of cute guys OMG LOLZ” because, as we all know, even the quiet geek girl really just wants to drop trough and get dicked by the coolest boy in school. The other female addition is cast as an extension of Howard, and her only real purpose is clarify that the tiny Jewish man’s misogynistic actions are merely “boys being boys” as he leers upon any female like a dog in heat waiting to hump his next victim. In the scenes where Howard isn’t with her, she plays very little part in the progression of the story line and even her occasional jokes can’t be saved by the canned-laughter implemented to lure an unsuspecting viewer into finding comedy at a joke that has all the wit and charm of a house brick. So even the implementation of female scientists into the show failed at creating any positive female roles models, and this is because these “book-smart” characters are still left coming across as morons with the emotional intelligence of a ham sandwich.

The only main character I’ve failed to mention is Raj. The sensitive Indian star gazing astronomer who strives for love in his life and for a brief second made me wonder if the constant stench of male testosterone might be slightly dissipated by his presence. Which it isn’t. Raj, instead of bringing some positive Indian culture to the show brings more stereotypes although this time in the shape of nonchalant racism and also, for the most part, acts like a sex pest after a hit of Viagra. While his supposed best friend Howard makes constant digs at Raj’s racial heritage, and calls him a pussy for not dry humping anything with a vagina, Raj himself does little to deflect the air of white pride in the room by having every other line of speech a half-arsed comedic reference to something slightly Indian. “I just got the latest issue of Bombay Ba-donka-donk”, “You bet your mango-chutney I’m telling the truth!” and “I come from India which is a smelly awful country full of strange people that you awesome white gods would not like nor understand, and quite right you are!” are just a few examples of common lines by this character (probably).

Or maybe I’m just a cynical dick. Maybe portraying negative stereotypes is okay as long as it’s only in jest. But even if that’s true, it’s still not done in a very intellectual way. The UK’s Peep Show tackled dumb racist stereotypical views in a completely different manner. For one, they made it funny. But other than that the show managed to implement racism into the plot by making racist attitudes seem so goddamn stupid that even Prince Phillip felt a little silly about thinking less of foreigners:

So why the hell do I still tune into The Big Bang Theory? Is it because I like the theme tune, and can do a little finger dance and privately enjoy looking like a twat when the three chimes play on the words “Hot, dense, state”? Is it because that even though the character Penny is an awful human-being the attraction I developed for Kaley Cuoco during her Eight Simple Rules days when she was younger and still uncomfortable in her own skin, even though she played pretty much the same character, are still lingering? Or am I just hoping and praying for another set of Stuart heavy episodes (the only character within the entire show with a personality, and who an audience can feel genuine empathy for as a character who is admired for owning his own business yet still deals daily with the painful pangs of loneliness)? It’s probably none of these reasons. Humans are creatures of habit and even though, much like Sheldon, I try to avoid the “human condition” as much as possible, I am one. So my regular tuning is probably more a yearning for some familiarity in my life than an actual love of the show (plus I really do enjoy doing my twatty finger dance). 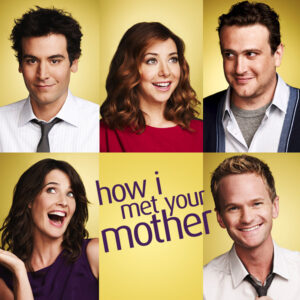 But I’m being harsh, really. Because The Big Bang Theory isn’t half as bad as some other sitcoms. The aforementioned How I met Your Mother managed nine whole series of absolutely nothing funny ever happening (an incredible feat for any sitcom writing team. Shit, even Schindler’s List probably had at least one giggle). And if I hear one more person tell me how funny it is that Barney, the womanising lothario, is played by well-known flamer Neil Patrick Harris (a role he plays in every single acting job he receives), I will kick them. Hard and in the face. He’s gay. We get it.

So I decided to write a premise for my own sit-com to join the ranks of dull on television today. I’ve called it Board Stiff:

Steven works in a cardboard box factory and has the personality of a dish cloth. He’s in love with Pam, an air-headed blonde who makes no secret of how she’s blown off every guy in the place…except Steve. One day Pam falls into one of the machine and dies. The series then follows a multitude of flashbacks where Steven remembers all the times he could have made a move on Pam, and hopefully have got blown off too, while his friend, an over misogynistic womaniser who I haven’t decided as to whether he should be played as a human or, as part of Steven’s mental breakdown over Pam’s death, a cardboard box, tries to get Steve back into the dating world and interested in women who aren’t already dead. There’ll be other characters too, probably a black guy who says things like “Wooo-Weee!” an awful lot, but they’re so dull it doesn’t even warrant writing about. And to be so boring that you’re not the star in a show whose central characters are a cardboard box, a corpse, and the man who beats off over said corpse, is a very depressing prospect for any aspiring actor/actress.

Shame on us all.

Additional Note From The Writer: After sending a friend the draft of this article to check I was turned towards another online piece about the sexism within the show. A far more articulate, yet still very readable, piece that can be found here.

~
All words by Ian Critchley. More writing by Ian on Louder Than War can be found at his author archive.