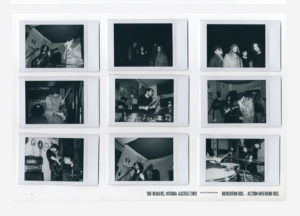 There’s a lot to be said for bands that drench themselves so profoundly in a style of yesteryear that they feel like they are not of this time. And that’s exactly what The Dealers do. Another band in the long line of garage-revivalists that refuse to let the style die, and hats off to them as they pull it off with such skill that they breath new life into that traditional Nuggets-style 60s garage rock. Lead song Blue Light Man dives straight into a rocking groove that recalls The Knickerbockers 1966 song, One Track Mind. The added harmonies bring a touch of early powerpop, while the harmonica blasts and added flourishes of psychedelia return it to where their sound is rooted. It’s another great track in the long lineage of garage rock that’s run through from the 60s’ originals, to the first round of revivalists like The Cynics, and on to the next generation of today’s bands.

On the flip side, Pareidolic Way takes a more direct pounding freakbeat slant. The rhythm is a constant beat, while a tremolo-laden guitar (and sometimes vocals) flits underneath. The constant barrage is almost trance-inducing, a key to its own name in finding patterns in randomness. It’s another great song that, together with Blue Light Man, suggest that The Dealers are on track to produce a fantastic second album. Here’s hoping they get to it soon!

Watch the teaser for Blue Light Man / Pareidolic Way below: